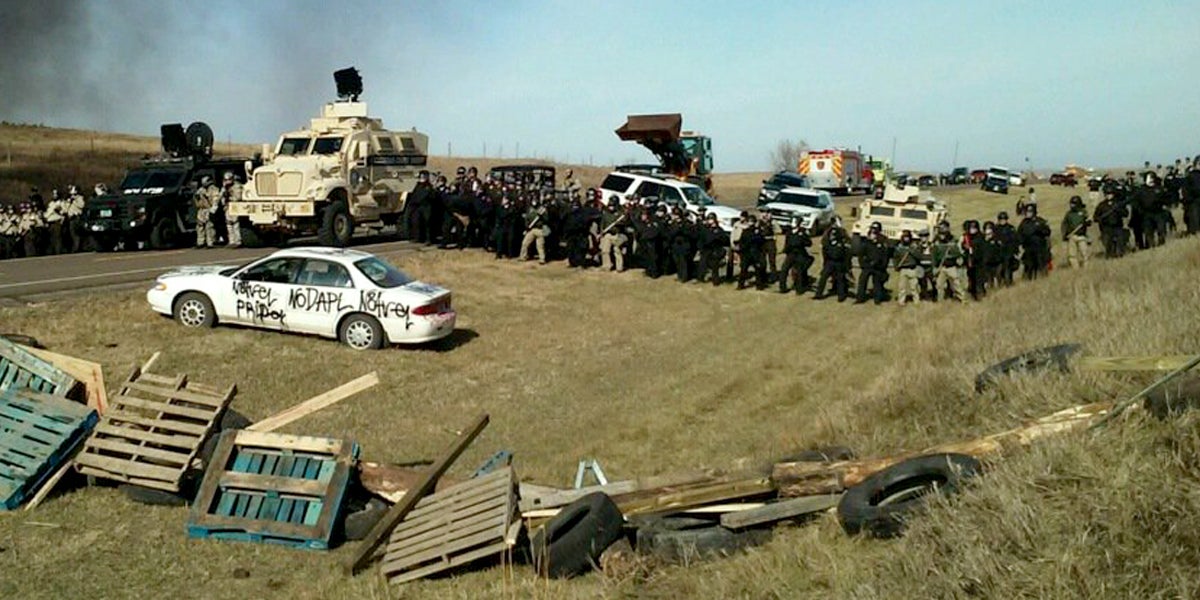 UPDATE, 5:57 a.m. EDT: According to Reuters: “Police arrested 141 Native Americans and other protesters in North Dakota in a tense standoff that spilled into Friday morning between law enforcement and demonstrators seeking to halt construction of a disputed oil pipeline. Police in riot gear used pepper spray and armored vehicles in an effort to disperse an estimated 330 protesters and clear a camp on private property, according to photos and statements released by the Morton County Sheriff’s Department.“

In Cannonball, North Dakota, more than 100 police with military equipment are advancing on a resistance camp established by Native American water protectors in the path of the proposed $3.8 billion Dakota Access pipeline. Photos and multiple videos posted to Facebook Live depict more than 100 officers in riot gear lined up across North Dakota’s Highway 1806, flanked by multiple mine-resistant ambush protected military vehicles, a sound cannon, an armored truck and a bulldozer. There have also been reports from water protectors that the police presence includes multiple snipers. Police appear to be evicting the camp in order to clear the way for the Dakota Access pipeline company to continue construction—which was active at times on Thursday just behind the police line.

Police advance towards blockade on Hwy 1806 to evict #OcetiSakowin from 1851 treaty land and pave way for the #DakotaAccessPipeline. #NoDAPL pic.twitter.com/VRQAGRdN10

Cody Hall of Red Warrior Camp told Democracy Now! that behind the line of police, the Dakota Access pipeline company is carrying out construction with cranes and bulldozers on the sacred tribal burial site where on Sept. 3, unlicensed Dakota Access security guards unleashed dogs and pepper spray against Native Americans.

Water protectors have set up a blockade of the highway using cars, tires and fire. Elders are also leading prayer ceremonies.

Sacheen Seitcham of the West Coast Women Warrior Media Cooperative told Democracy Now! police have used tasers against water protectors and that she was hit with a concussion grenade.

The frontline camp sits directly in the proposed path of the Dakota Access pipeline on private property purchased recently by the Dakota Access pipeline company for $18 million. In establishing this frontline camp, water protectors cited an 1851 treaty, which they say makes the entire area unceded sovereign land under the control of the Sioux. Over the weekend, police arrested more than 120 people in a peaceful march to this site during which police deployed tear gas and used rubber bullets to shoot down drones the water protectors were using to document police activity.

Ahead of Thursday’s apparent police raid, the Federal Aviation Administration also issued a temporary no-fly zone for the airspace above the resistance camps for all aircraft except for those used by law enforcement. This order means Native Americans can no longer fly drones to document police activity, but the police can continue to fly their surveillance drones and helicopters.

“As a young person I want to know what the next four years are going to entail,” said Garrett Hairychin. “Is Hillary going to be focused on protecting our land? I want to know if my younger family is going to be safe. Our present situation is in dire need of a leader that still remembers that our kids are here. We want to protect the future for the young ones that come after us. I’m here to support my family.”