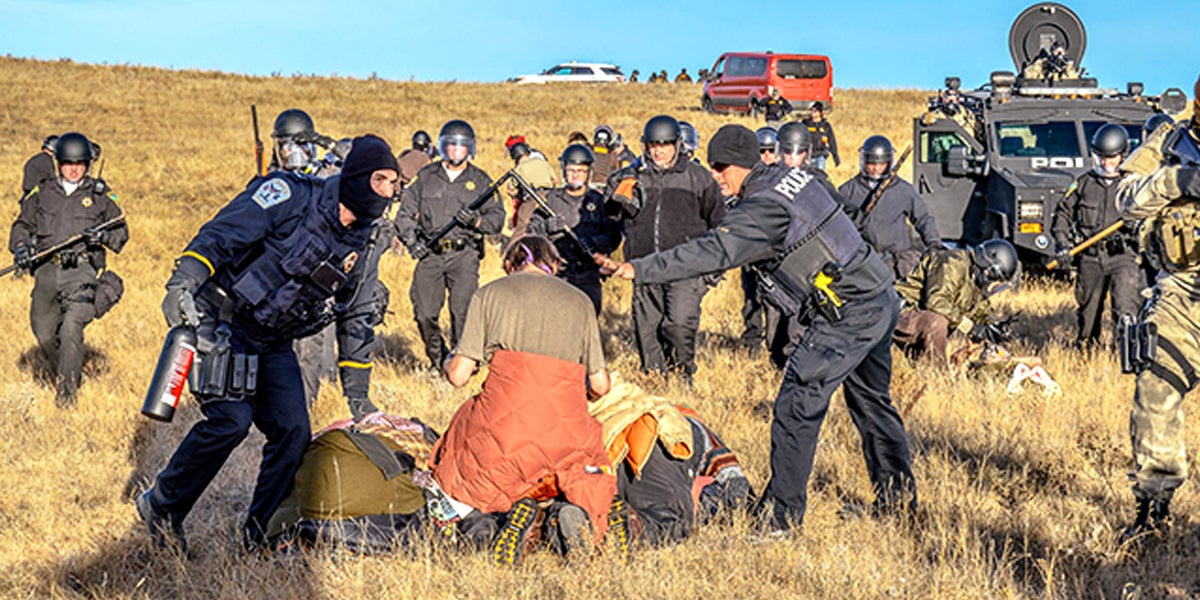 More than 80 people were arrested in North Dakota Saturday, as police armed with pepper spray descended on a protest near the Dakota Access Pipeline (DAPL) construction site. 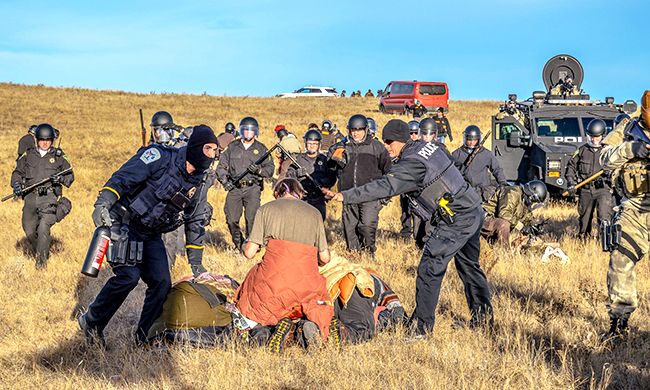 The 83 water protectors were hit with charges ranging from rioting to criminal trespass, according to the Morton County sheriff’s department. The Bismarck Tribune reported:

Kellie Berns, a protester who hung back behind a fence at the scene, said she received reports of people being pepper-sprayed and thrown to the ground and described law enforcement as being more aggressive than in past incidents. She said protesters were encircled by police as they walked onto the site.

“People came back very distressed,” she said of those who returned to the fence following the demonstration. “The pipeline is getting a lot closer, so the stakes are getting higher.”

Protests against DAPL have been ongoing for months, as the Standing Rock Sioux, along with other tribes and environmental activists, say the $3.8 billion, 1,100-mile pipeline threatens their access to clean water and violates Native American treaty rights.

Last week, riot charges against Democracy Now! host Amy Goodman were dismissed after she turned herself in to North Dakota police. An arrest warrant was issued after Goodman’s crew videotaped a private security team hired by the pipeline company assaulting peaceful protesters with attack dogs and pepper spray. Meanwhile, documentary filmmaker Deia Schlosberg faces up to 45 years in prison for reporting on the protests.

“This string of arrests constitutes nothing less than a war on journalism and a victory for fossil fuel interests that have banked on the pipeline,” Food & Water Watch Executive Director Wenonah Hauter said last week.

Saturday’s arrests follow reports of escalating police abuse at the protest sites, including beatings and unnecessary strip-searches of those arrested.

Construction on the pipeline is continuing despite a request from the federal government to put a halt on activity so that the U.S. Army Corps of Engineers can properly consider objections.

On Sunday morning, water protectors took back unceded territory affirmed in the 1851 Treaty of Ft. Laramie as sovereign land under the control of the Oceti Sakowin, erecting a frontline camp of several structures and tipis on Dakota Access property. This new established camp is 2.5 miles north of the Cannon Ball River, directly on the proposed path of the Dakota Access Pipeline.

According to Honor the Earth:

To ensure the protection of this new camp from overtly militarized law enforcement, water protectors have established two road blockades. One north of the Frontline Camp, on Highway 1806, and another immediately west of Highway 1806, on county road 134.

Police have discharged weapons, using rubber bullets to shoot down drones being used to document the police activity and actions.

This frontline camp is located on the final three miles of the proposed pipeline route, before it connects with the drill pad that will take the pipeline beneath the Missouri River. Active construction of the Dakota Access pipeline is two miles west of this frontline camp. Oceti Sakowin water protectors continue an on-going pledge to halt active construction as frequently as possible.

“We have never ceded this land,” Joye Braun of Indigenous Environmental Network said. “If DAPL can go through and claim eminent domain on landowners and Native peoples on their own land, then we as sovereign nations can then declare eminent domain on our own aboriginal homeland. We are here to protect the burial sites here. Highway 1806 has become the no surrender line.”