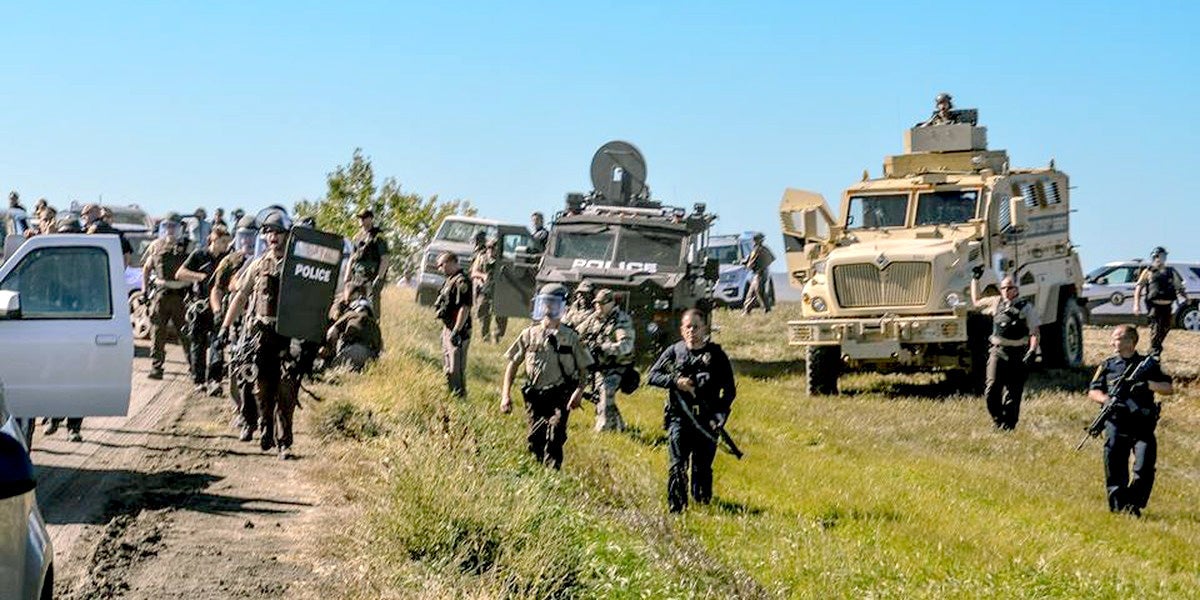 The Morton County Sheriff’s Department, whose officers used mace and unleashed dogs on Dakota Access Pipeline protestors earlier this month, sent in armored vehicles and arrested 21 people Wednesday at two sites. But a video released by those at the Sacred Ground Camp shows unarmed protestors conducting a prayer ceremony involving the planting of willow and corn.

“We had a really nice ceremony,” said a Sicangu Lakota grandmother. “Then we looked and over that way, there were a few police and the next thing we knew there were 40 police all in riot gear.”

Police moved in as peaceful demonstrators stood with their hands up. The video then shows officers confronting the protestors, grabbing women and ordering everyone into their cars.

“I’ve never had a gun pointed at me,” said the grandmother. “I went into shock.”

In a press release issued Wednesday by the Morton County Sheriff’s Department, they allege that “a protester on horseback charged at an officer in what was viewed as an act of aggression.”

Another video shows at least three riders on horseback but does not show any “charging” toward officers. At least one officer raised his weapon toward the civilians even as they shouted, “We are unarmed. We have no weapons.”

According to the Indian Country news site, Indianz.com, Morton County Sheriff Kyle Kirchmeier “has previously come under fire for spreading his own rumors. As thousands began to flock to North Dakota in early August, he claimed there were pipe bombs at the encampment but resisters told The New York Times that he was mistaken by the presence of sacred Chanunpa pipes used during ceremonies.”

The military-style show of force came as a surprise to the 60-vehicle caravan traveling to three sacred sites. The first of these was the Sacred Ground Camp, where ancestral sites have been desecrated. This was the location of the Sept. 3 attack using dogs. In a separate video posted by Indigenous EnviroNet on Twitter, they argue that North Dakota media has portrayed the protestors as violent and stress that their movement has always been about non-violence, prayer and peace.

Help us get the right message out to the world: #noDAPL has always been a peaceful movement based in prayer #wearenonviolent #WaterIsLife pic.twitter.com/SCWkAeMtUW

Thomas H. Joseph II, who filmed one of the videos from yesterday’s arrests, posted on Facebook, “Today’s action where uncalled for, the police was a direct threat to woman and children.”

Famed actor Robert Redford spoke out Wednesday in defense of those opposing the Dakota Access Pipeline. “If this is legal, one must seriously question the laws of the land,” Redford said. “They are laws that prioritize the profits of energy companies over the rights of people who actually have to live on the land, drink its water and eat its food.”