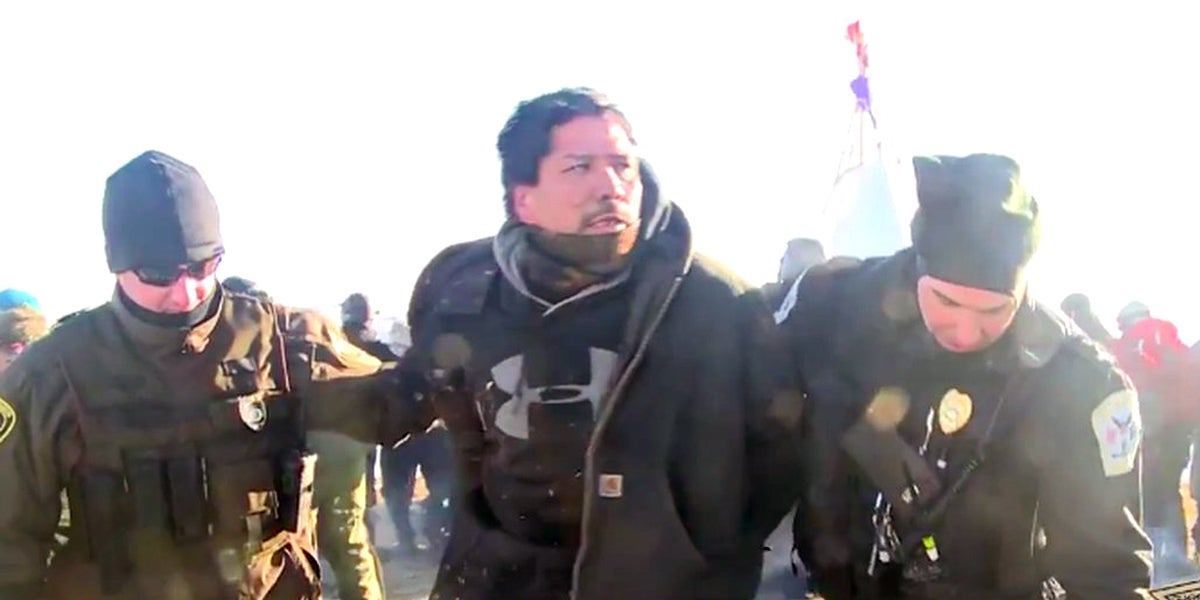 Seventy-six Water Protectors were arrested following a clash with law enforcement at Standing Rock on Wednesday afternoon. The arrests came a day after federal officials
claimed that the final controversial easement for the Dakota Access Pipeline (DAPL) had been granted.

According to the
Huffington Post, deputies said “rogue protesters” were seized without injury after twice refusing warnings to leave the property,.

“Law enforcement showed great restraint, enduring verbal abuse and taunts and protesters resisting arrest but did not make use of any less-than-lethal munitions. The camp was cleared by around 4:00 pm,” the office said in a
statement.

The video shows several officers arriving to the scene in armored vehicles. They were wearing riot gear and some carried arms.

For months, the demonstrators have been trying to block the highly contested pipeline which they say violates sovereign treaty rights and could contaminate their water supply.

“A lot of water protectors really felt that we needed to make some sort of stand as far as treaty rights,” Linda Black Elk, a member of the Catawba Nation, told
The Guardian. “We basically started to see police mobilizing from all directions. Someone came along and told us we had about 15 minutes before the camp would get raided.”

“There were a lot of people who felt like the prospect of treaty rights was something worth getting arrested over,” she added.

Former Congressional candidate Chase Iron Eyes, a vocal opponent against the pipeline project, was among those arrested on Wednesday.

The incident comes one week after President Donald Trump‘s orders to revive the $3.8 billion project. The Executive Order instructs the Army Corps to “review and approve [the Dakota Access Pipeline] in an expedited manner” and to consider withdrawing the environmental-impact requirement ordered by the Obama administration.

On Tuesday, Sen. John Hoeven (R-ND) and Rep. Kevin Cramer (R-ND) issued separate statements suggesting that the acting Secretary of the Army Robert Speer has ordered the Army Corps to issue the final easement to tunnel under Lake Oahe.

Cramer’s statement appeared on his
website with a photo of a shovel and a hashtag saying, #Build It.

“I have received word the Department of Defense is granting the easement for the Dakota Access Pipeline and Congressional notification is imminent,” he said. “It’s time to get to work and finish this important piece of energy infrastructure enhancing America’s energy security and putting North Dakotans and Americans back to work. President Trump has proven to be a man of action and I am grateful for his commitment to this and other critical infrastructure projects so vital to our nation.”

But in a
statement Tuesday night, the Standing Rock Sioux said they had not received notice that the easement had been granted, calling the lawmakers’ claims “premature” and challenging the possible suspension of the Army Corps’ environmental impact statement as a “wholly unexplained and arbitrary change based on the president’s personal views and, potentially, personal investments.”

Law enforcement has arrested 696 protesters since August 10, 2016, the Morton County Sheriff’s Office said. Unfortunately for the Water Protectors, they might be facing a legal nightmare.

“A randomized survey conducted by the National Jury Project concluded it is highly likely that the more than 600 water protectors facing criminal charges in the coming months will not receive fair trials from petit jurors impaneled in Morton and Burleigh Counties. The survey found that 77 percent of the juror-eligible population in Morton County and 85 percent of the juror-eligible population in Burleigh County had already decided the defendants were guilty.”