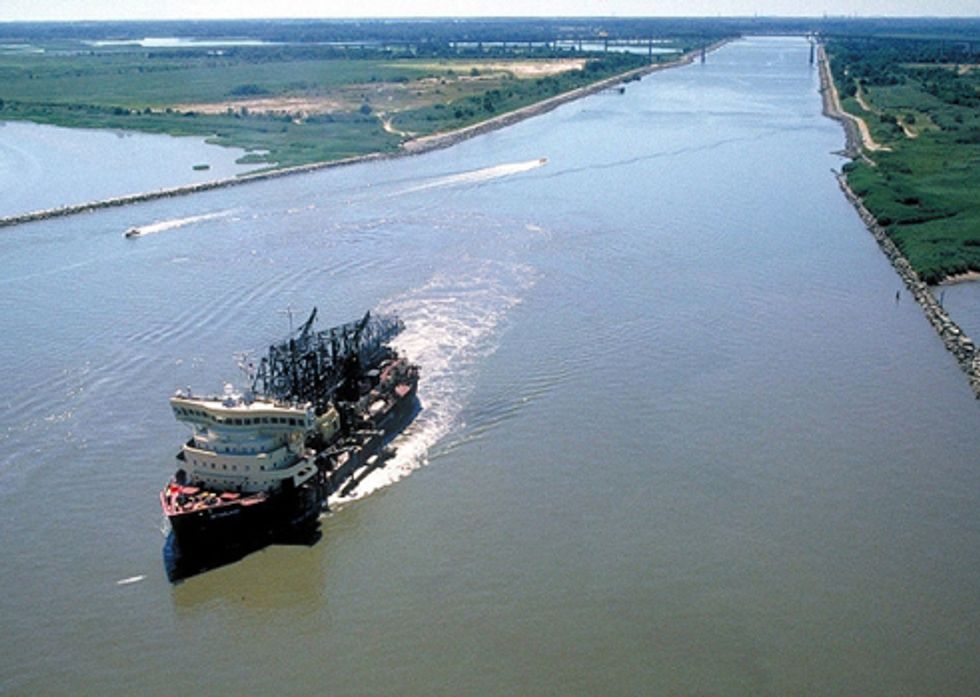 Responding to renewed economic claims for deepening the Delaware River, a coalition of taxpayer, community and environmental organizations issued a new independent analysis they say proves once again that the deepening project is an economic loser. The groups issued the analysis and an accompanying report titled Army Corps Cooks the Books Again, in response to a May 2011 analysis issued by the Army Corps of Engineers. (A copy of the reports can be obtained at www.delawareriverkeeper.org.)

“The Army Corps once again tried to mislead Congress and the public about the deepening project—a renewed analysis by Dr. Bob Stearns clearly demonstrates how the Army Corps manipulated their calculations so as to present a false picture for the project,” said Maya van Rossum, the Delaware Riverkeeper. “The inappropriate calculation was not hard to find. The corps’ own report provides the analysis and numbers. Without deepening, shippers will use the feeder port approach which is far cheaper than trucking, and when all matters are considered, is also cheaper than deepening. The corps’ assessment pretends that without deepening, shippers would use the far more expensive trucking option to get goods to the Philadelphia area markets. But the corps’ own practices and procedures make clear that the shipping alternative is the best alternative and the one that would be selected, thereby supporting and encouraging port jobs without the need for a nearly $300 million, environmentally devastating deepening project.”

According to the new Cooked the Books report, correction of the shipping vs. trucking error alone reduces the benefit-cost ratio for the project to, at best 1.1 (or to below 1 to 1, depending on a shipping diversion assumption)—far below the 1.64 claimed by the Army Corps’ May 2011 report. Supplemental information in the report provided by the coalition of organizations identifies a number of additional errors they say, when included in the calculation, revive the Government Accountability Office (GAO) finding that deepening would provide less than a dollar of benefit for every $1 of cost paid for by the taxpayers.

“The corps’ economic analysis deserves to be on a Chinese menu under twice-cooked pork. The errors were too obvious and too basic to be a mistake,” says Steve Ellis, vice president of Taxpayers for Common Sense. “But more importantly, the new report is being used to justify renewed funding for a project that doesn’t meet the federal government’s basic criteria for ensuring tax dollars are invested only in those projects that will generate clear economic value for the country.”

“This new economic analysis makes it clear that the Delaware River Deepening project is an economic looser, which poses substantial environmental risks. The Army Corps needs to take a hard look at its project review practices if projects like this, that don’t meet the corps’ own basic economic standards, are getting the green light,” asserts George Sorvalis, coordinator with the Water Protection Network.

In a report issued in April 2010, the GAO issued its third challenge to the reliability and accuracy of the Army Corps economic claims for deepening (the first GAO report being issued in 2002, the second challenge in the form of Congressional testimony given in 2006). The Army Corps 2011 report was issued in apparent response to the less than glowing GAO 2010 report. The May 2011 Army Corps analysis was its 8th economic analysis of the deepening. “But no one ever learned of this report or got an opportunity to review it until we secured the report through a Freedom of Information Act request,” says van Rossum. “As soon as we received a copy we pursued an independent review of its claims. We think our findings clearly demonstrate why the Army Corps felt the need to keep this newest analysis an apparent secret—because it’s clear that once again they cooked the books, a practice far too common with the Army Corps and one that demeans the entire federal government.”

“With the nation staring into a $15 trillion chasm of debt and Congress looking for deficit reduction, there is no place in the budget for this boondoggle,” says Ellis. “For years, the Delaware River Deepening survived on a steady diet of parochial earmarks. The current earmark moratorium provides Congress the perfect opportunity to stop wasting tax dollars on this economic loser.”

Taxpayers for Common Sense (TCS) is a non-partisan budget watchdog that has fought for fiscal responsibility in Washington for more than 15 years—working with Democrats and Republicans, and groups on the right and the left. TCS is best known for its campaign against spending “earmarks” and as the original whistle-blower on the “Bridge to Nowhere”—a proposed $380 million Alaskan bridge that became an infamous example of federal waste.

Water Protection Network (formerly Corps Reform Network), a coalition of hundreds of organizations from around the country, works to ensure water projects and policies are economically and environmentally sound.