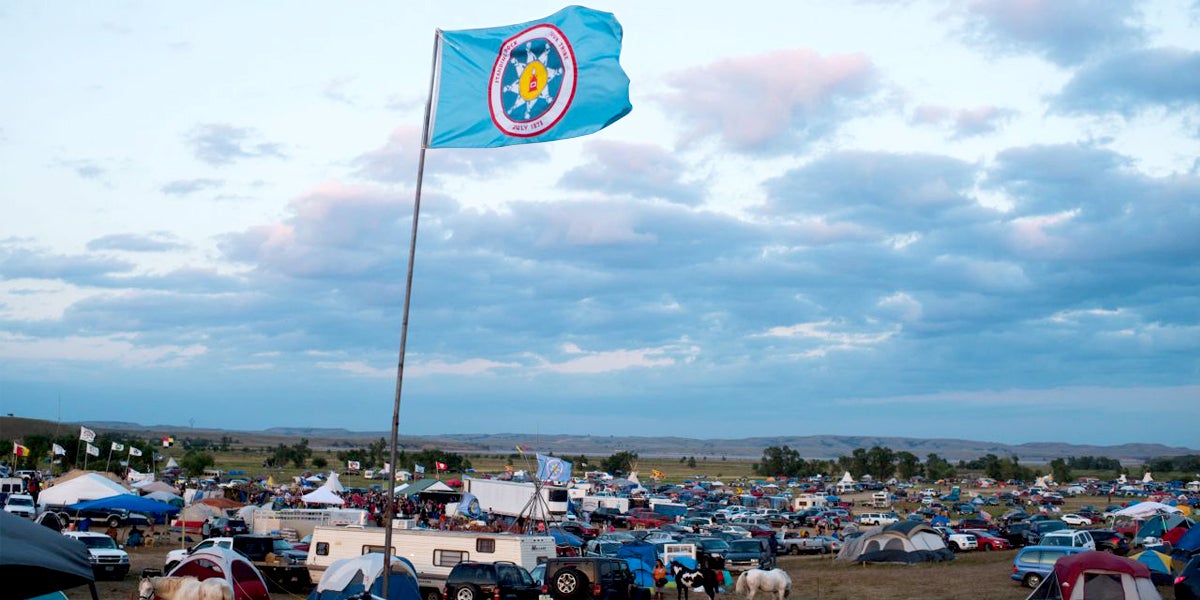 The chairman of the Standing Rock Sioux Tribe, Dave Archambault II, received a letter today from the district commander of the Corps of Engineers, John Henderson, informing him that the Army Corps will be “closing the portion of the Corps-managed federal property north of the Cannonball River to all public use and access effective December 5, 2016.”

Watch the Facebook live video of the Standing Rock press event held Saturday afternoon in response to the eviction letter:

Henderson’s letter goes on to say:

“This decision is necessary to protect the general public from the violent confrontations between protestors and law enforcement officials that have occurred in this area, and to prevent death, illness, or serious injury to inhabitants of encampments due to the harsh North Dakota winter conditions. The necessary emergency, medical, and fire response services, law enforcement, or sustainable facilities to protect people from these conditions on this property cannot be provided. I do not take this action lightly, but have decided that it is required due to the concern for public safety and the fact that much of this land is leased to private persons for grazing and/or haying purposes as part of the Corps’ land management practices …

“Any person found to be on the Corps’ lands north of the Cannonball River after December 5, 2016, will be considered trespassing and may be subject to prosecution under federal, state, and local laws.” 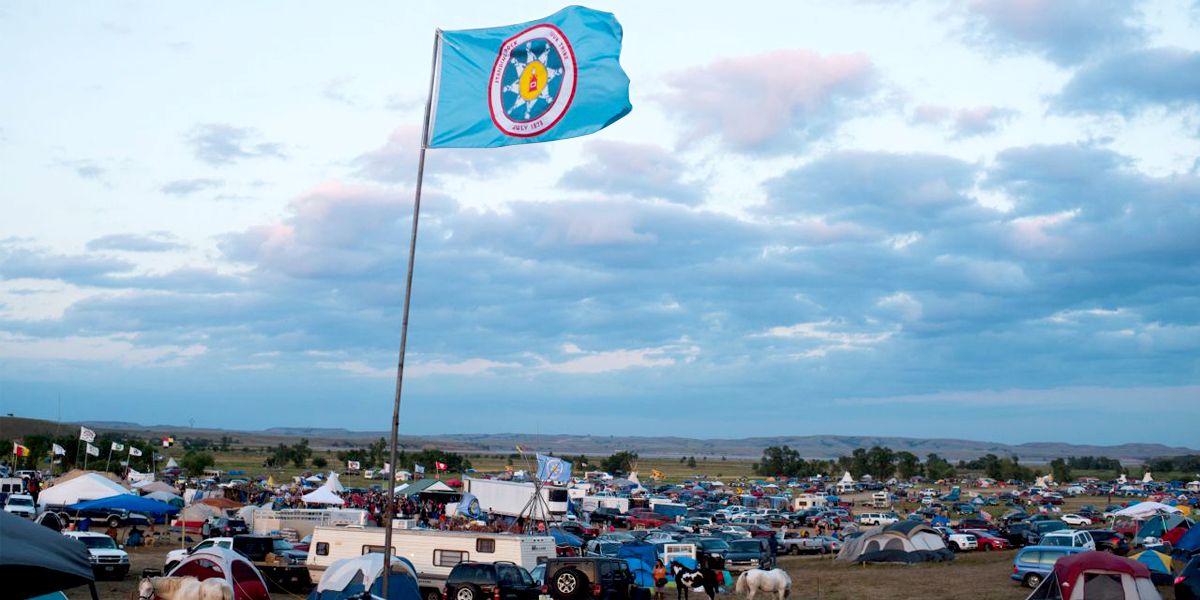 In response to the letter, Archambault released a statement Friday saying the Standing Rock Sioux Tribe is “deeply disappointed in this decision by the United States, but our resolve to protect our water is stronger than ever.”

Archambault goes on to say:

“The best way to protect people during the winter, and reduce the risk of conflict between water protectors and militarized police, is to deny the easement for the Oahe crossing, and deny it now. We ask that everyone who can appeal to President Obama and the Army Corps of Engineers to consider the future of our people and rescind all permits, and deny the easement to cross the Missouri River just north of our Reservation and straight through our treaty lands. When the Dakota Access Pipeline chose this route, they did not consider our strong opposition. Our concerns were clearly articulated directly to them in a tribal council meeting held on Sept. 30, 2014, where DAPL and the ND Public Service Commission came to us with this route. We have released the audio recording from that meeting.

“Again, we ask that the United States stop the pipeline and move it outside our ancestral and treaty lands. It is both unfortunate and disrespectful that this announcement comes the day after this country celebrates Thanksgiving—a historic exchange of goodwill between Native Americans and the first immigrants from Europe. Although the news is saddening, it is not at all surprising given the last 500 years of the mistreatment of our people. The Standing Rock Sioux Tribe stands united with more than 300 tribal nations and the water protectors who are here peacefully protesting the Dakota access pipeline to bolster indigenous people’s rights. We continue to fight for these rights, which continue to be eroded. Although we have suffered much, we still have hope that the President will act on his commitment to close the chapter of broken promises to our people and especially our children.”

This letter comes just 12 days after the Army Corps announced that it would delay a decision on granting an easement to Energy Transfer Partners, after determining that “additional discussion and analysis are warranted in light of the history of the Great Sioux Nation’s dispossessions of lands, the importance of Lake Oahe to the Tribe, our government-to-government relationship and the statute governing easements through government property.” The $3.8 billion pipeline project is now in its final stretch with more than 80 percent of the pipeline already constructed.

“Army Corps has just written a letter demanding that the main Standing Rock resistance camp to the Dakota Access Pipeline be evacuated by December 5. This is a major act of aggression against basic rights of peaceful assembly and protest in the U.S. and constitutes a violation of treaties as well as the U.S. constitution’s guaranteed right to protest and assemble,” filmmaker Josh Fox said.

“Oceti Sakowin, the main camp for water protectors, is a beautiful self-organizing community,” Fox continued. “It stands as not only the main place for the protest movement to assemble and organize, but it also represents a major leap forward for our combined movements for the environment, indigenous sovereignty and real democracy in America. If the Army Corps tears down this protest camp hundreds more will spring up in its place. A crucial alliance between indigenous values, native sovereignty and environmental movements has been forged here. We expect that the standing rock movement will find new and creative ways to fight the Dakota Access Pipeline no matter what, and that the Standing Rock movement and its alliances will find many areas of common ground and protest. We will fight fracking. We will fight pipelines.”

Greenpeace spokesperson Lilian Molina also shared her outrage at the Corps of Engineers’ letter. “It is 2016, Thanksgiving weekend, and the Army Corps has decided to force the Standing Rock Sioux off of its own sacred land,” Molina said. “This is an astounding and shameful move by the United States government. The United States has ignored Indigenous sovereignty for far too long, and Standing Rock is an opportunity for President Obama to do right for the Indigenous community and for the climate.”

The eviction notice enforcement date is just one day after more than 600 veterans plan to join the water protectors at Standing Rock to peacefully protest the Dakota Access Pipeline. High-profile veterans including U.S. Rep. Tulsi Gabbard of Hawaii and retired Baltimore police officer/whistleblower Michael A. Wood, Jr. plan to attend.

“This country is repressing our people,” Wood Jr. told Task & Purpose. “If we’re going to be heroes, if we’re really going to be those veterans that this country praises, well, then we need to do the things that we actually said we’re going to do when we took the oath to defend the Constitution from enemies foreign and domestic.”

Hundreds of water protectors were injured at the Standing Rock encampments Sunday evening during a standoff with policy when water protectors used a semi-truck to remove burnt military vehicles that police had chained to concrete barriers weeks ago, blocking traffic on Highway 1806. Law enforcement officers blasted them with water cannons in freezing temperatures. Sophia Wilansky, a water protector from New York, was seriously injured after being shot with a concussion grenade.

“If you spend any time at all at Oceti Sakowin, with it’s nightly campfires, music, spirit of camaraderie, protest, generosity and community, you quickly see how empty the mainstream American culture is, with it’s constant consumerism and greed and every man for himself competition,” Fox said. “The main camp at Standing Rock is a spiritual and political leap forward for us. A thing of beauty and sincerity. It is a testament to what humans can make when love becomes the answer to a crisis. We stand with Standing Rock and we make our protests to protect water for all Americans. We believe in love, prayer and beauty.

“It is unlikely that this news will be taken lightly, there will be a fight for the Standing Rock camp. The fight for American values continues there.”