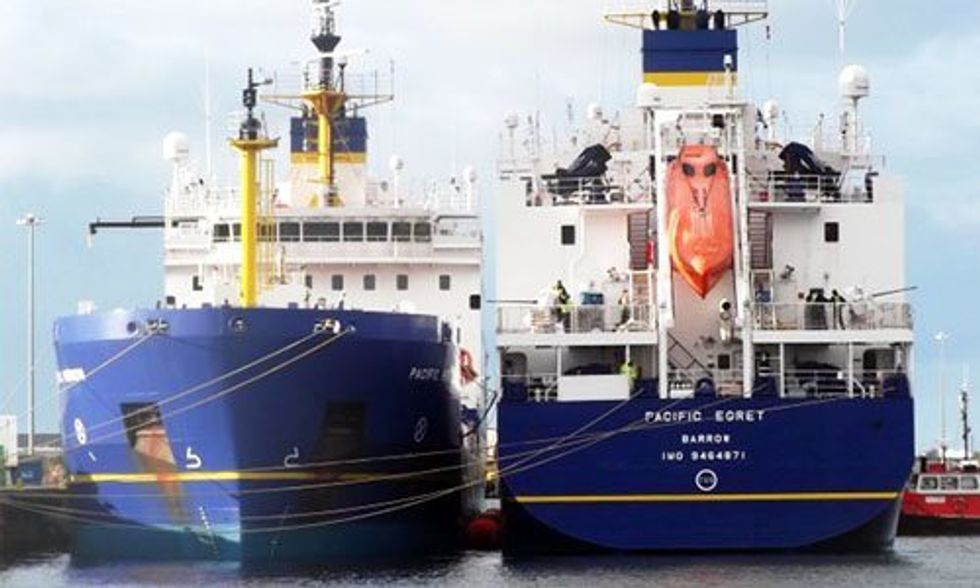 Two armed ships set off from the northwest of England this week to sail round the world to Japan on a secretive and controversial mission to collect a consignment of plutonium and transport it to the U.S.

The cargo of plutonium, once the most sought-after and valuable substance in the world, is one of a number of ever-growing stockpiles that are becoming an increasing financial and security embarrassment to the countries that own them.

So far, there is no commercially viable use for this toxic metal and there is increasing fear that plutonium could fall into the hands of terrorists or that governments could be tempted to use it to join the nuclear arms race.

All the plans to use plutonium for peaceful purposes in fast breeder and commercial reactors have so far failed to keep pace with the amounts of this highly-dangerous radioactive metal being produced by the countries that run nuclear power stations.

The small amounts of plutonium that have been used in conventional and fast breeder reactors have produced very little electricity—at startlingly high costs.

Out of Harm’s Way

Japan, with its 47-ton stockpile, is among the countries that once hoped to turn their plutonium into a power source, but various attempts have failed. The government, which has a firm policy of using it only for peaceful purposes, has nonetheless come under pressure to keep it out of harm’s way. Hence, the current plan to ship it to the U.S.

Altogether, 15 countries across the world have stockpiles. They include North Korea, which hopes to turn it into nuclear weapons.

The UK has the largest pile, with 140 tons held at Sellafield in north-west England, where plutonium has been produced at the site’s nuclear power plant since the 1950s. The government has yet to come up with a policy on what to do with it—and, meanwhile, the costs of keeping it under armed guard continue to rise.

Like most countries, the UK cannot decide whether it has an asset or a liability. The plutonium does not appear on any balance sheet and the huge costs of storing it safely—to avoid it going critical and causing a meltdown—and guarding it against terrorists are not shown as a cost of nuclear power.

This enables the industry to claim that nuclear is an attractive and clean energy-producing option to help combat climate change.

The two ships that set off from the English port of Barrow-in-Furness this week are the Pacific Egret and Pacific Heron, nuclear fuel carriers fitted with naval cannon on deck. They are operated by Pacific Nuclear Transport Ltd, which ultimately is owned by the British government.

The presence on both ships of a heavily-armed security squad—provided by the Civil Nuclear Constabulary’s Strategic Escort Group—and the earlier loading of stores and the craning on board of live ammunition point to a long, security-conscious voyage ahead.

The shipment of plutonium from Japan to the U.S. falls under the U.S.-led Global Threat Reduction Initiative or Material Management & Minimization program, whereby weapons-useable material such as plutonium and highly-enriched uranium is removed from facilities worldwide for safekeeping in the U.S.

The cargo to be loaded onto the two UK ships in Japan consists of some 331kg of plutonium from Japan’s Tokai Research Establishment.

This plutonium—a substantial fraction of which was supplied to Japan by the UK decades ago for “experimental purposes” in Tokai’s Fast Critical Assembly facility—is described by the U.S. Department of Energy (DOE) as “posing a potential threat to national security, being susceptible to use in an improvised nuclear device and presenting a high risk of theft or diversion.” Or, as another U.S. expert put it, “sufficient to make up to 40 nuclear bombs.”

Under the U.S.-led program, the plutonium will be transported from Japan to the U.S. port of Charleston and onwards to the Savannah River site in South Carolina.

Tom Clements, director of the public interest group Savannah River Site Watch, has condemned this import of plutonium as a material that will simply be stranded at the site, with no clear disposition path out of South Carolina. He sees it as further evidence that Savannah River is being used as a dumping ground for an extensive range of international nuclear waste.

The British group Cumbrians Opposed to a Radioactive Environment has for decades tracked the transport of nuclear materials round the world.

Their spokesman, Martin Forwood, said: “The practice of shipping this plutonium to the U.S. as a safeguard is completely undermined by deliberately exposing this prime terrorist material to a lengthy sea transport, during which it will face everyday maritime risks and targeting by those with hostile intentions.

“We see this as wholly unnecessary and a significant security threat in today’s volatile and unpredictable world.”

The best option, Cumbrians Opposed to a Radioactive Environment believes, would have been to leave it where it was, under guard.

From DOE documents, this shipment will be the first of a number of planned shipments for what is referred to as “Gap Material Plutonium”—weapons-useable materials that are not covered under other U.S. or Russian programs.

In total, the DOE plans to import up to 900kg of “at risk” plutonium—currently held in seven countries—via 12 shipments over seven years. Other materials include stocks of highly-enriched uranium—the most highly enriched plutonium, (to 93 percent), also being supplied to Japan by the UK.

The voyage from Barrow to Japan takes about six weeks and a further seven weeks from Japan to Savannah River—use of the Panama Canal having been ruled out by the DOE in its documents on the shipment. Previously, the countries near the canal have objected to nuclear transport in their territorial waters.