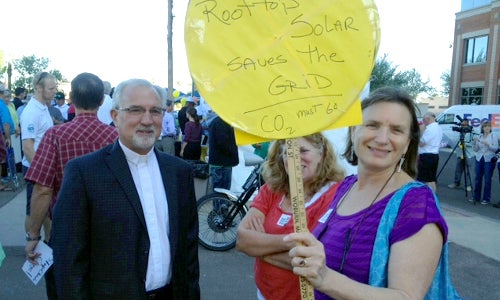 In Arizona, contractors won’t be only ones collecting money from those with solar panels.

The state’s largest utility can impose a fee of about $4.90 a month on customers with solar systems, following the Arizona Corporation Commission’s (ACC) 3-to-2 vote in favor of Arizona Public Service Co (APS). The collections will begin next year for residents who will have installed panels after Dec. 31.

That estimate is for a home that has 7 kilowatts of solar power. More panels, of course, will mean more fees.

The 1,000 or so solar proponents who showed up to the ACC’s hearing actually shared one thing in common with APS—displeasure. APS originally wanted to charge $50 or more per month.

“[The approved fee] falls well short of protecting the interests of the one million residential customers who do not have solar panels,” APS CEO Don Brandt said in a statement. “We will continue to advocate forcefully for the best interests of our customers and for a sustainable solar policy for Arizona.” 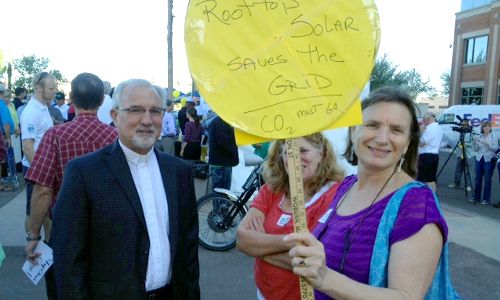 People rally outside the Arizona Corporation Commission in response to the approval of a fee for solar customers in the state. Photo credit: Sierra Club

According to Bloomberg, Arizona is one of 43 states that has a net metering program, which requires utilities to buy solar power from customers who put it back on the grid. APS wanted to do away with net metering altogether, but the ACC wouldn’t take that step.

It’s no different than the sweeping, anti-renewable legislation the American Legislative Exchange Council plans to discuss in a few weeks at its States and National Policy Summit in Washington D.C. That’s likely why the decision in Arizona caught the attention of groups like the Sierra Club and Solar Energy Industries Association (SEIA).

“We acknowledge APS originally proposed a much-larger charge, but our state’s burgeoning private solar industry will still need to overcome this new challenge,” Will Greene, Sierra Club’s clean energy campaign organizing representative in Phoenix, said in a statement. “Rooftop solar brings important energy savings to working families and it gives us the freedom to be more energy independent.”

SEIA President and CEO Rhone Resch believes his organization to do more to help prevent these types of rulings in the future.

“Despite having some of the best solar resources in the nation, Arizona now has one of the shakiest policies for encouraging its development,” Resch said in a statement.

“Hopefully, we can reverse this course in the future by working closely together. In the months ahead, we will continue our efforts to educate the ACC, as well as public officials all across the state, as to the true market value of solar and the benefits it provides to local economies, grid reliability, consumer choice and environmental quality.”

Shayle Kann, vice president of research at GTM Research, believes the ACC’s vote was at least partially positive, as it could have completely sided with APS and rid the state of net metering.

“In the narrow context of what is happening in Arizona right now, it was a positive thing for solar,” he said. “From a broader sense, it is precedent-setting as the first surcharge specifically for net metered customers.”

Greene says the decision could end up helping those who want to slow a growing industry.

“The changes the ACC adopted completely ignores the benefits that rooftop solar brings to our state,” Greene said. “Their decision stands to raise major roadblocks that will threaten the growth of our clean energy economy—and its nearly 10,000 direct jobs.

“Instead of trying to obstruct the growth of rooftop solar, APS—and the ACC—should try to encourage its expansion, so that everyone enjoys the energy savings and economic prosperity that rooftop solar generates.”