Arizona Air Force Base Celebrates Largest Solar Array of Any on U.S. Department of Defense Grounds 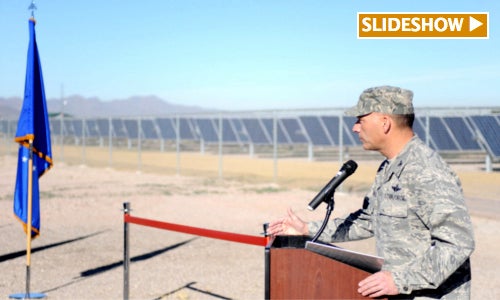 There are at least 700 renewable energy projects on U.S. Department of Defense (DoD) grounds. The department’s largest solar array was launched this month in Arizona.

The Davis-Monthan Air Force base (D-M) in Tucson, AZ celebrated the ribbon cutting of a 16.4-megawatt photovoltaic solar array earlier this month. The array is powerful enough to provide electricity to 3,000 homes each year and reduce base utility costs by an annual average of $500,000, according to a D-M statement.

“When you look at the money saved over 25 years, it’s incredible and also critical to our mission, not only to D-M, but also to the DoD,” said Col. Kevin E. Blanchard, 355th Fighter Wing commander.

This is critical, considering that the Air Force is the federal government’s largest energy consumer, spending more than $9 billion per year on electricity and fuel.

The new array at D-M will supply about 35 percent of the base’s power needs. The base entered into an agreement with SunEdison LLC to design, finance, build, operate and maintain the array on 170 acres of underutilized land at two base locations on base.

The power it will provide each year is equivalent to the carbon emissions that would be reduced by taking 7,500 cars off the road, according to Tucson Electric Power President David Hutchens.

“We are looking across the DoD right now for every avenue that we can find to save money and put that money into readiness and sustainment of our force,” Blanchard said. “By saving money on D-M’s electric bill, that will help the future of our Air Force, the greatest air force in the world.”