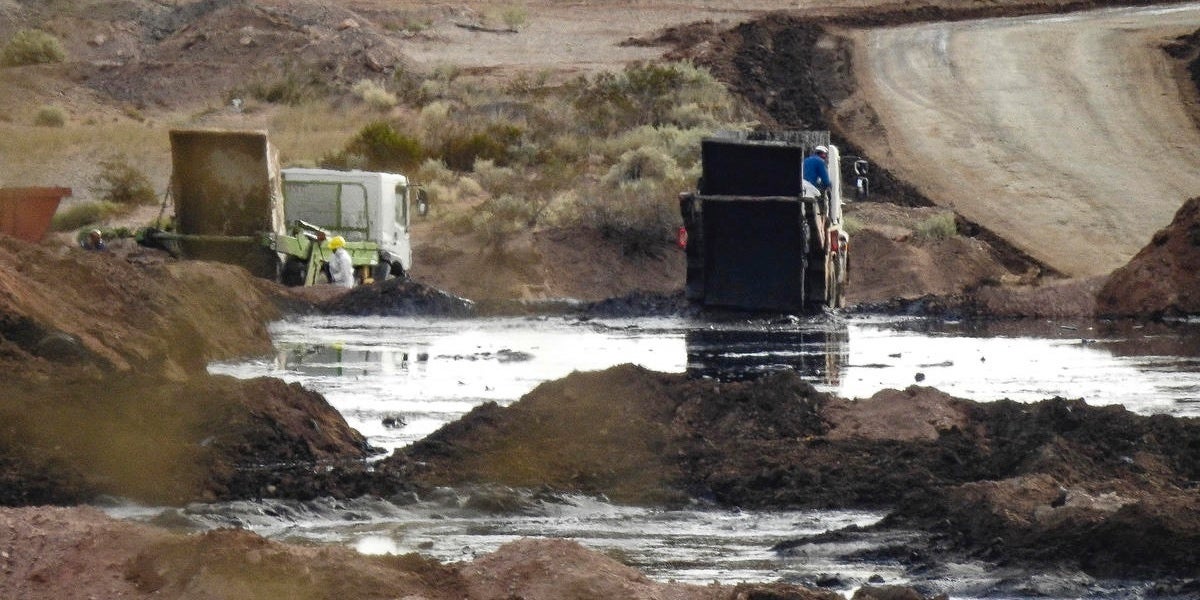 Fracking waste from the Vaca Muerta shale basin in Argentina being dumped into an open air pit. Greenpeace

A major indigenous group in the Argentine Patagonia is suing some of world’s biggest oil and gas companies over illegal fracking waste dumps that put the “sensitive Patagonian environment,” local wildlife and communities at risk, according to Greenpeace.

The Mapuche Confederation of Neuquén filed a lawsuit against Exxon, French company Total and the Argentina-based Pan American Energy (which is partially owned by BP), AFP reported. Provincial authorities and a local fracking waste treatment company called Treater Neuquén S.A. were also named in the suit.

The Mapuche accused the companies of contaminating the environment with “dangerous waste” due to “deficient treatment” close to the town of Añelo, according to AFP.

The waste comes from operations in the Vaca Muerta field, one of the largest deposits of shale oil and gas in the world that lies in the Neuquén province.

“We denounce the company Treater Neuquén S.A., responsible for environmental contamination with hazardous waste, for deficient treatment and disposal of the oil industry’s waste,” said Héctor Jorge Nawel, coordinator for the Xawvn Ko area of the Mapuche Confederation of Neuquén, in a press release. “It is critical that the state authorities and oil company executives who allowed this happen be held accountable, and that our right to a healthy environment be respected.”

On Monday, Greenpeace claimed Total and Royal Dutch Shell (which was not named in the lawsuit) are “dumping thousands of tonnes of toxic oil and industrial waste” from their fracking operations into illegal open waste ponds in Patagonia.

“The Vaca Muerta reserves house approximately 830 fracking wells, each one generating between 600 to 850 cubic meters of waste in a month of operation. To be transported to treatment plants, much of that waste must pass through cities, communities, drinking water sources, and agricultural fields,” Greenpeace said.

In its report released Monday, Greenpeace said their investigators found the dumps in November 2017 and started taking samples from them in May.

Some of the pits, including one that’s almost reached the size of “15 football fields,” are only 5 kilometers (approximately 3 miles) away from homes and families, Greenpeace said.

“The way these oil companies operate is pure environmental vandalism and demonstrates how little control local authorities truly have,” said Paul Horsman, spokesperson for Greenpeace Andino’s climate and energy campaign, in the press release. “Oil-soaked soils and polluted air may be business as usual for companies like Shell and Total, but the government of Argentina cannot afford to continue putting oil industry profits before the health of its communities. With climate scientists warning that the world has just 12 years to cut fossil fuel use by 50 percent, it is madness to spend billions of dollars fracking Patagonia into oblivion.”

In response to the report, Pan American Energy told Greenpeace they have no contractual relationship with Treater, the fracking waste company. However, the company is listed as a client on Treater’s website.

Treater also told Greenpeace that its operations are legal. Shell acknowledged a relationship with Treater, but said that the authorities are responsible for oversight. Total has requested a meeting with Greenpeace.

None of the other companies named in the Mapuche lawsuit have commented, according to AFP.

Unacceptable. The Trump administration offered more than 150,000 acres of public lands for fossil-fuel extraction near some of Utah's most iconic landscapes, including Arches and Canyonlands national parks. https://t.co/LezXCN3xC4