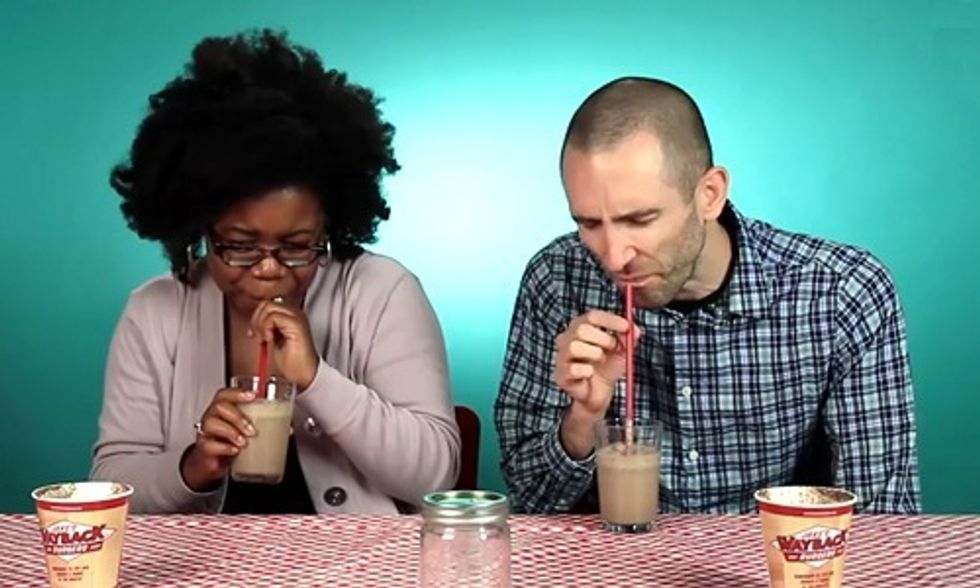 Eating insects has gotten a lot of attention in the U.S. lately. Bugs have been hailed as a climate-friendly superfood that can feed our crowded planet. Last month, Dr. Jenny Josephs gave a TEDx Talk in which she explained why eating bugs will soon become the new normal around the world. (She notes that 2 billion people already eat insects as part of their diet).

In her talk, Josephs discusses how dozens of companies in Europe and the U.S. are marketing their bug-filled products. One of those companies is Wayback Burgers. For the last few months, the nation-wide fast-food chain has been popping up again and again. It started as an April Fool's joke. The company was going to put out a fake press release about insect-filled milkshakes, but people were so excited to try them that the company decided to actually make the bug-laced shakes. They did a trial run at a Long Island location, and it was so popular that on July 1 they rolled out their Oreo Mud Pie Cricket Protein Milkshake.

The company uses an organic cricket protein powder, which can be added to any of the company's shakes if Oreo mud pie is not your thing. According to the company's website, the shake is "made with hand-dipped vanilla bean ice cream, Oreo Cookie Crumbles, Peruvian Chocolate Cricket Protein powder, and chocolate and coffee flavors blended to deliver 24 grams of protein."

Sounds pretty tasty to me. Maybe some of you aren't sold, though. "There won't be big pieces of cricket floating in your shake or anything," Gillian Maffeo, director of marketing for Wayback Burgers, told ABC News. "We use a protein powder that looks very similar to whey powder. So it's ground up cricket and you wouldn't even know the difference if you were drinking it, quite honestly."

Looks like eating bugs is really making some headway in the U.S: "Initially, we thought that we'd get a lot of backlash but the trend right now is that bugs are making their way into foods," Maffeo said, noting the appearance of burgers, energy bars, flours and other recent products to the market. "It's definitely a hot commodity."

Still not convinced? Buzzfeed enlisted some people to try out the new shake.