Are You Ready to Power Your Car With the Sun? 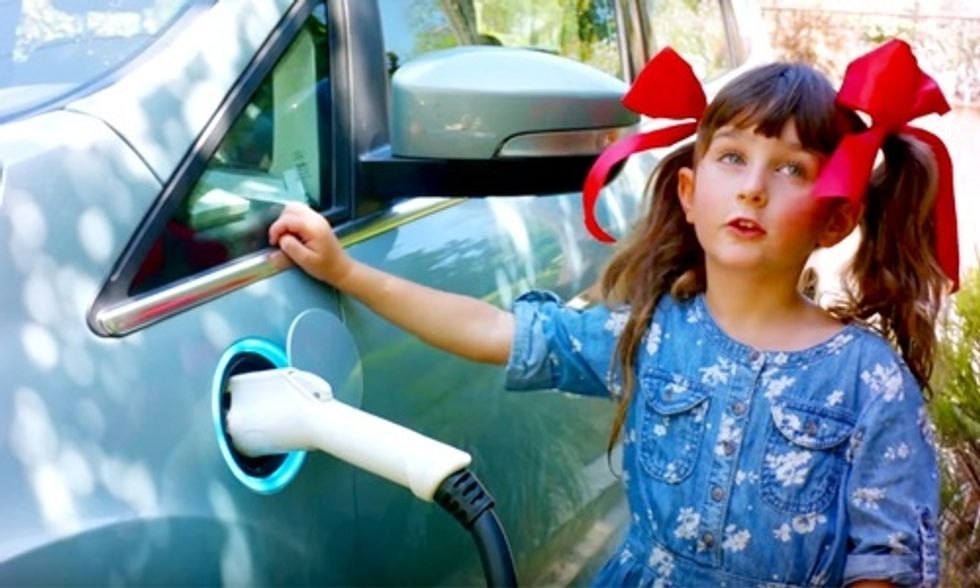 Even Eloise, who is four and three quarters years old, knows that certain things just go well together. Like peanut butter and jelly. Or solar power and electric vehicles (EV). In this newly released video, she tells us why.

The good news—the great news—is that the ability to power our cars by the energy of the sun is becoming increasingly easy and affordable. A partnership called Drive Green For Life formed among the solar installer SunPower, Ford Motor Company and the Sierra Club makes it easier for folks to drive on sunshine.

Here’s how it works: you visit your local Ford dealership and test-drive the plug-in hybrids C-Max Energi and Fusion or the full battery electric Focus—all great plug-in cars to consider. If you do purchase or lease a Ford EV, you can save in energy costs and slash even more carbon emissions by using a solar system to charge your vehicle and your home. If this sounds appealing to you, then contact SunPower to sign up for a free solar evaluation. If you do end up purchasing or leasing a solar system, then you'll get a $750 rebate and the Sierra Club will get a $500 donation from SunPower.

It's a five-way win for the consumer, SunPower, Ford, Sierra Club and our planet.

The partnership isn’t limited to new purchases. If you already happen to drive a Ford EV, then you can go right to contacting SunPower for a solar evaluation.

As the Sierra Club continues to build public support for 100 percent clean energy with our new #ReadyFor100 and Electric Vehicles campaigns, the Drive Green for Life partnership offers our supporters an incentive to go 100 percent clean themselves by powering their EVs with solar, all while also supporting our critical work urging cities, governments, businesses and local communities to commit to renewable power.

December 2015’s record-breaking EV sales (after a strong November showing, too) demonstrate that a clean transportation future is well on its way and 2016 could be a big year for EVs and their happy drivers. With more than a half a million U.S. households with rooftop solar, it’s not surprising that many of these people see the benefits of driving electric. When the Center for Sustainable Energy interviewed plug-in car drivers in California, they found that 32 percent of them had rooftop solar on their homes. That’s huge! But, with EV sales making up less than one percent of total U.S. auto sales, we have a long ways to go.

Fortunately, there are a lot of EVs on the market at different price points and federal and some state tax credits and rebates—coupled with lower fueling costs—make EVs a smart financial choice. Additionally, solar power is getting notably cheaper. If you lease a solar system, you can start reducing your energy bills right away. If you purchase solar, the pack-back period or the period of time it takes to make back the money spent on solar through electricity savings, is now faster than ever. In fact, from early 2011 to early 2014, the average price of household solar dropped 50 percent. Even with today’s low gas prices, the Department of Energy notes it’s much cheaper to power your car on electricity than gasoline.

"As an electric vehicle owner with solar panels on my home, I can personally attest to the satisfaction that comes from being able to power our family's car and home electricity needs at once," Sunwoo Kahng, a Sierra Club supporter who lives in Newton, Massachusetts told me. “It feels great to simultaneously slash our carbon emissions and energy costs.”

Solar drops the carbon footprint—or carbon skid marks—from your EV to nearly nil. In my region of New England, if you drive a plug-in Ford Focus and have conventional electricity, you're reducing your carbon emissions by about 65 percent compared to driving a Honda Civic. (See the Sierra Club's online EV Guide where you can calculate this for your own state and with any plug-in car in mind). But with solar, those emissions decrease astronomically.

There are a lot of wonderful EV options available, but Ford electric cars and SunPower solar systems are terrific examples of products that will help people live greener while saving some green. In signing up for the program, people will also support the Sierra Club's work to move beyond fossil fuels while expanding and accelerating our development of clean, renewable energy.

Even preschoolers like Eloise know that EVs and sunshine are a match made in heaven. Drive Green For Life makes moving toward 100 percent clean energy for our electricity and our transportation simpler than you think. To learn more about how you can drive on sunshine, check out more information on Drive Green For Life here.