Are There More Oil and Gas Wells in LA Than Movie Stars? 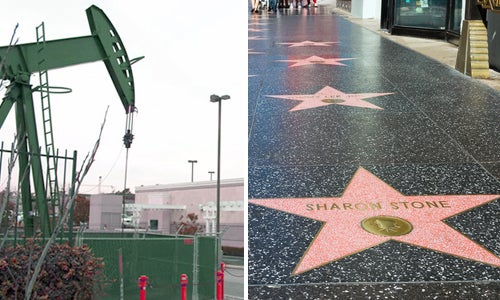 The story of the rise and fall of Edward Doheny, the first oil baron of Southern California, would seem the archetype of a LA noir tale: A man rises from rags to riches and presents a veneer of respectability to the outside world, but behind closed doors lurks corruption, even violence. Elaborate stagecraft—Hollywood’s specialty—hides the machinery and political machinations that fuel what boosters like to call “progress.” A kind of prosperity veils danger. Here’s how the story goes: 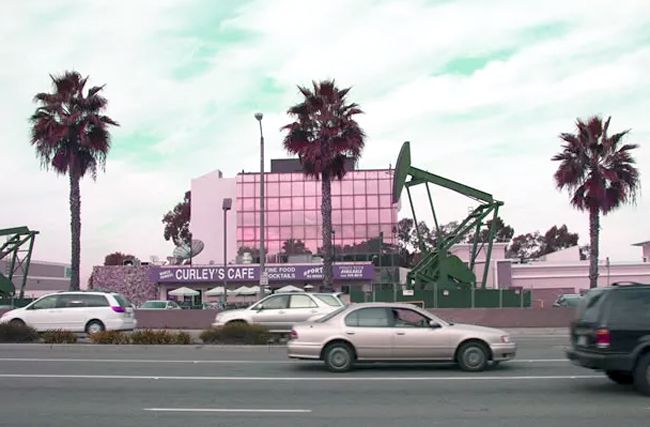 LA projects itself as a theme park of movie stars, ocean surf, and sunshine. Yet underneath and behind the beauty and glitz, the city and county of Los Angeles function as a gigantic oil field and processing facility. Photo credit: Heather Cleary

In 1892 Doheny, a failed silver prospector from New Mexico starting over in Los Angeles, observed a cart full of a foul-smelling brown substance—brea, or pitch—moving down the street. He soon found the source near what is now MacArthur Park, a Latino neighborhood north of downtown. “My heart beat fast,” Doheny later recalled. “I had found gold and I had found silver, and I had found lead, but this ugly looking substance … was the key to something more valuable than any or all of these metals.” By the 1920s Doheny ranked among the world’s richest men. The “Emperor of Oil” some people called him.

Then he got busted in the Tea Pot Dome Scandal. Doheny gave Secretary of the Interior Albert Fall $100,000 in exchange for transferring the Elks River oil reservoir in Kern County, north of LA, from the control of the U.S. Navy to the Interior Department, from which Doheny obtained leases to drill. The cash was delivered to Secretary Fall by Doheny’s son, Ned, and Ned’s sidekick, Hugh Plunkett. Federal criminal prosecutors charged Doheny and Fall with bribery, and eventually federal civil courts found the leases a violation of the Mineral Leasing Act. Fall went to jail. Doheny walked free, but his March 1929 acquittal came too late. A month earlier Hugh Plunkett had shot Ned to death and then killed himself. Edward Doheny, financially broken and heartsick, died in 1935. His three-story mansion in South LA—8 Chester Place—and the surrounding land eventually went to the Catholic archdiocese in Los Angeles and became the St. Mary’s College campus.

This dark saga of LA oil—the making and unmaking of elaborate facades—is not over. For decades companies pumped oil and natural gas from a small well pad on former Doheny land sandwiched between St. Paul’s Cathedral and a St. Mary’s College parking structure, leasing it from the Catholic archdiocese. Then, in the 1990s production stopped, as it did in many other LA urban oil fields. Existing extraction technology could not profitably recover any more petroleum. In 2009, though, new well stimulation techniques started to appear across Southern California, and the oil well on the old Doheny property was brought back into service. 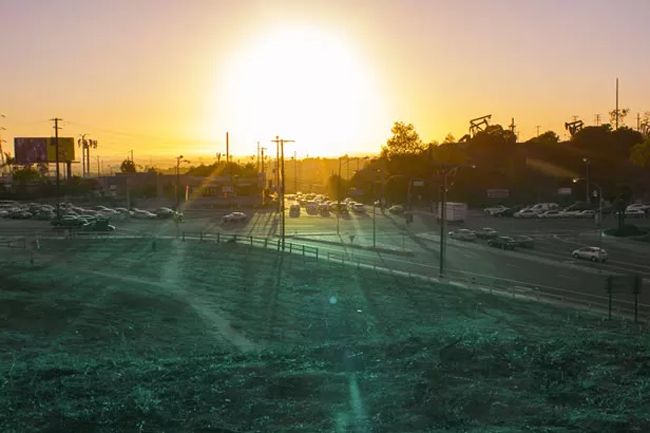 Within this metropolis exist some 3,700 active fossil fuel wells. Together, they extract 24 million barrels of oil each year and 18 million cubic feet of natural gas. Photo credit: Heather Cleary

On rare occasions the oil companies used high-pressure injection of water and chemicals—hydraulic fracturing, commonly known as fracking—to get at the oil. More often they used a technique called “well acidizing.” When an old oil or gas well is first treated, it typically requires 1,000 gallons of a solution containing water and 20 percent hydrochloric acid (an air toxic) for every foot of well pipe. Injected under pressure (but not as high pressure as in fracking), this fluid permeates a strata of rock roughly 200 feet long by 20 feet high and 20 feet wide, dissolving rock and mud and thus enhancing oil or gas flow. To keep the pipes clear from dissolved mineral deposits and sand, operators also routinely conduct “maintenance acidizing” and “gravel packing,” the pressured injection of gravel and crystal silica (another air toxic).

An oil company called Allenco Energy acidized the wells near the old Doheny estate for years before anyone grasped what was happening. The well pad is not visible from the street. It is situated behind a wrought-iron fence behind which grows a wide lawn laced with palm trees. Beyond that stands a 10-foot-tall brick and stucco wall. People in the community considered it a “normal” part of the urban landscape. Many thought that behind the beige wall stood just another one of the LA Department of Water and Power’s many facilities.

Then people began to get sick, and community organizers started agitating, providing the latest twist to what has become a perfectly LA story: Ground zero for the new Southern California resistance to the oil industry is the former estate of the region’s first petroleum mogul.