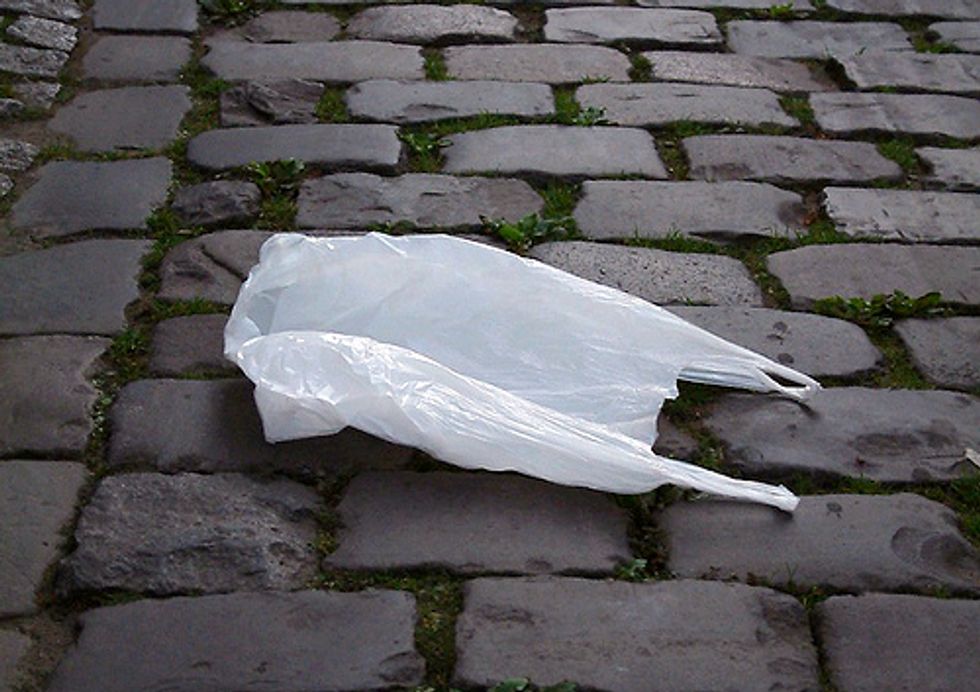 A national newspaper columnist wrote that “banning plastic bags will do exactly nothing to save the planet.” She went on to argue that they’re even environmentally friendly. Outright bans may not be the best solution, but plastic bags pose a big problem that must be addressed. The columnist appeared to be more interested in contrarianism for its own sake than in acknowledging the environmental harm these products cause.

Plastic bags are bad and for the most part unnecessary. Many of us older folks remember a time, only a few decades ago, when we didn’t have them. Sure, they’re convenient, but is that an excuse to damage the environment and the life it supports?

A University of British Columbia study found that 93 percent of beached northern fulmars (migratory seabirds related to the albatross) had bellies full of plastic—a substantial increase from the last time they were tested, in 1980. Head researcher Stephanie Avery-Gomm told the Globe and Mail that one bird had 454 pieces of plastic in its stomach. Eating plastic can severely harm or kill birds, as well as the 260 other marine species, including turtles and fish, that we know eat or get entangled in the stuff.

It’s not just bags, of course. We humans have become dependent on plastic for a range of uses, from packaging to products. Reducing our use of plastic bags is an easy place to start getting our addiction under control.

Canadians use between 9 and 15 billion plastic bags a year, enough to circle the Earth more than 55 times, according to the Greener Footprints website. (U.S. citizens use about 100 billion a year.) Few plastic bags are recycled. Most are used for a short time to carry groceries, and then maybe re-used as garbage bags or to wrap dog poop before ending up in the landfill or the ocean. Some people argue that, because they make up about one percent of the volume of waste in landfills, we shouldn’t worry. But one percent of the massive amounts of what’s in landfills is a lot, especially since plastic doesn’t biodegrade.

Because they’re lightweight, plastic bags are easily carried by wind and water. Besides accumulating in the ocean, they litter our streets and natural areas, often clogging drainage systems and contributing to flooding. They take at least 1,000 years to break down, and even then, they don’t biodegrade; rather, they fragment into smaller and smaller pieces, making them more likely to be eaten by marine and land animals.

Plastic is also a petroleum product, so continued and increasing use of it accelerates the depletion of valuable fossil fuels. According to Greener Footprint, 8.7 plastic shopping bags contain enough embodied petroleum energy to drive a car one kilometre.

Finding something to carry your groceries in is easy; inexpensive re-usable bags come in a variety of materials and sizes. Many are small and light and can be carried in a purse or daypack. I carry one in my back pocket and have refused dozens of plastic bags as a result. Some people worry about bacteria and other contaminants that may accumulate in the bags, but you just need to wash them regularly.

One of the bigger issues is what to put garbage in. Before the 1980s, no one used plastic bags for groceries or garbage, nor did we have composting or recycling programs, so we know that plastic garbage bags aren’t entirely necessary. The first step is to reduce the amount of garbage we produce. In fact, there’s really no such thing as garbage. It’s all resources, so we should more accurately refer to it as “waste.”

Buying products with less packaging and reducing overall consumption of unnecessary goods is a start. Re-using, recycling and composting also help you cut down what you send to the landfill. For the unavoidable waste, and the dog poop, use bio-compostable bags.

Outright bans on plastic bags may not be the best solution, but education and incentives to get people to stop using them are necessary. If we have any hope of finding ways for 7 billion people to live well on a planet with finite resources, we have to learn to use our resources efficiently. Plastic bags are neither efficient nor environmentally friendly.