Are Insects the Next Climate-Friendly Superfood? 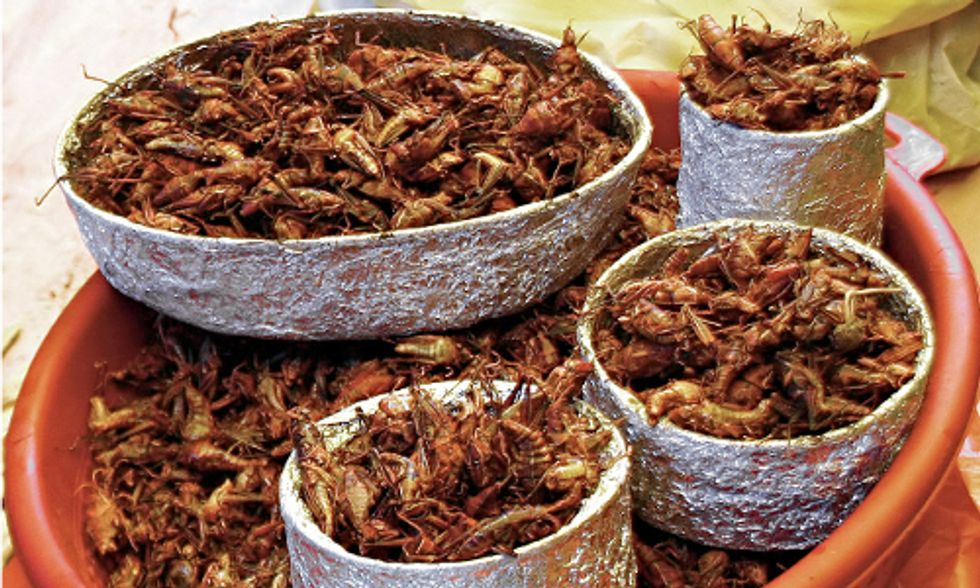 Maybe you've see little cans of chocolate-covered ants or grasshoppers in the exotic food section of your grocery and thought to yourself, "Yuck—who eats that?" Insects may not come to mind when you think of superfoods. But they could be the next hot "alternative" protein. They're low in fat and loaded with fiber.

You might be surprised to learn you may have been eating insects already. More than 30 companies are already using cricket flour in their products such as cookies and energy bars. And while eating insects is common in Latin America, southeast Asia and parts of Africa because they're a cheaply available commodity, in the U.S. food items containing cricket flour, which is still expensive to produce, are being marketed as artisan products intended for adventurous foodies eager to try something before everyone else.

Chapulines, a type of grasshopper, are a popular food in Mexico. Photo credit: Wikipedia

"Demand for food-grade insects is growing rapidly," says the website for Tiny Farms, a Silicon Valley-based start-up "pioneering the industry production of insects."

Currently, it admits, edible insects are a niche products with the cost of a pound of cricket flour ranging from $25-$45. But it says that's due to lack of scale and it hopes to change that.

"Right now in February 2015," said a recent post on the Tiny Farms blog "there are dozens of restaurants around the country experimenting with insects on their menus—from culinary hubs like San Francisco, Los Angeles and New York City to more conservatively palated Austin, Texas and Youngstown, Ohio. Food startups Exo, Chapul, Hopper Foods and Bitty Foods are ramping up production of their cricket flour energy bars and baked goods and growing their brick-and-mortar distribution networks in addition to serving up online sales. Exo's bars are even slated to be included in a snack box served on JetBlue Airlines flights. Boston-based Six Foods is preparing to launch their cricket chips, and dozens more new companies are developing products, business plans and marketing strategies to serve edible insects to the Western masses."

Youngstown, Ohio is mostly known for the death of its once-prosperous steel industry, which shrunk the city from 170,000 people to 65,000. But maybe it will become the edible insect capitol of the U.S. Big Cricket Farms, a project mentored by Tiny Farms, bills itself as "America's first urban cricket farm." Launched just last year, it says it's "devoted exclusively to raising human-grade entomophagical products" and that its crickets are fed high-quality, organic, sustainable feed. Founder Kevin Bachhuber first got the idea when he found himself snacking on bugs during a trip to Thailand and "found them to be delicious."

"So I raise bugs and I feed them to people," said Bachhuber in a recent TEDxYoungstown talk. "I'm shocked at how popular this has proven to be."

The farm raises European House Crickets, which it says "are considered to be tastiest, and are thus the most popular. They also offer a better nutritional profile than some of the other cricket species that humans typically consume."

The Washington Post referred to crickets as a "gateway bug" in an article titled How crickets could hook America on eating insects. What could they lead to? "Keep an eye on meal worms, fly larvae, caterpillars, black soldier flies and wax worms," says the Post.

With agriculture accounting for more than 8 percent of U.S. greenhouse gases, there's a great environmental benefit in going to insects as a source of protein. They require 1/12 as much feed as cattle, 1/4 as much feed as sheep and half as much feed as pigs and broiler chickens for the same amount of protein as well as a fraction as much water per gram of protein as all of these. And 80 percent of a cricket is edible, compared to 40 percent of a cow. A 2013 report released by the UN Food and Agricultural Organization (FAO), Edible Insects: Future prospects for food and feed security, focused on using insects as viable solution for feeding the world's growing population in a planet-friendly way as well as an engine for economic development.

"Insects as food and feed emerge as an especially relevant issue in the twenty-first century due to the rising cost of animal protein, food and feed insecurity, environmental pressures, population growth and increasing demand for protein among the middle classes," it says. "Edible insects have always been a part of human diets, but in some societies there is a degree of distaste for their consumption. Although the majority of edible insects are gathered from forest habitats, innovation in mass-rearing systems has begun in many countries. Insects offer a significant opportunity to merge traditional knowledge and modern science in both developed and developing countries."

So what kinds of insects are being consumed for the approximately 2 billion people worldwide who don't live in societies with that "degree of distaste?" Beetles lead the list by a large margin, followed by caterpillars, bees, wasps, ants, crickets, grasshoppers and locusts.

Even earthworms are edible, according to Mother Earth News, which gives instructions on how to get the dirt they consume out of their bodies and says, "After purging, their flavor can be a little bitter. Drying them mellows this flavor; incorporating them into various dishes helps as well. They can be added to stirfries, stews, anywhere your imagination wanders."

One big debate remains: can or should vegetarians eat insects? Opinions vary.

Can Insects Feed a Hungry Planet?

6 Things You Need to Know About Protein