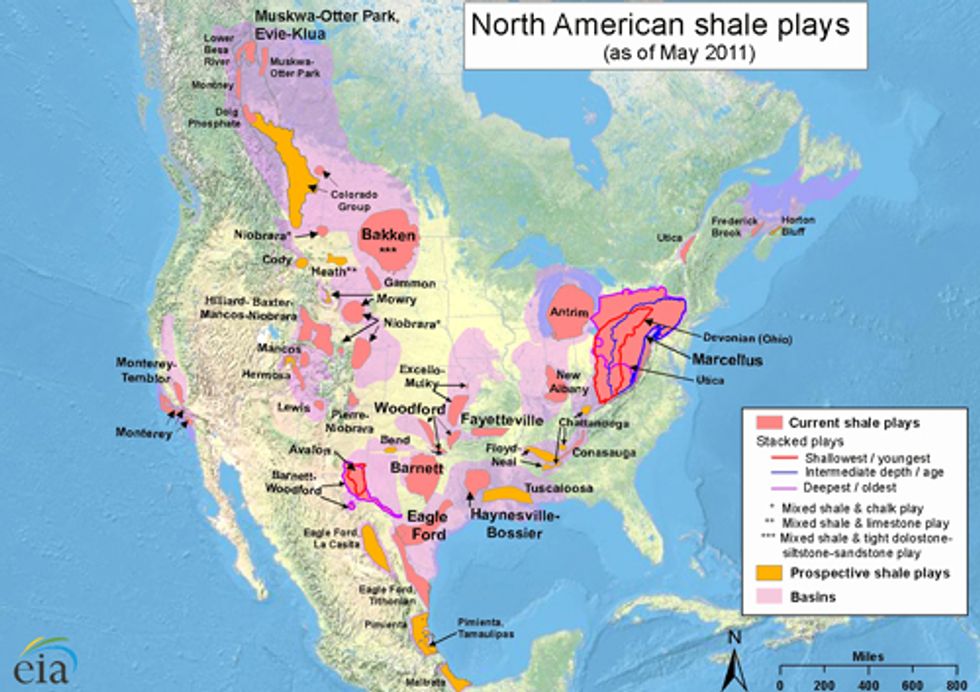 Two new papers tie a recent increase in significant earthquakes to reinjection of wastewater fluids from unconventional oil and gas drilling. The first study notes “significant earthquakes are increasingly occurring within the United States midcontinent.” In the specific case of Oklahoma, a Magnitude “5.7 earthquake and a prolific sequence of related events … were likely triggered by fluid injection.”

The second study, of the Raton Basin of Southern Colorado/Northern New Mexico by a U.S. Geological Survey (USGS) team, concludes "the majority, if not all of the earthquakes since August 2001 have been triggered by the deep injection of wastewater related to the production of natural gas from the coal-bed methane field here.”

Both studies are being presented at the annual meeting of the American Geophysical Union this week.

These studies, together with other recent findings, make a strong case that we need national regulations on wastewater injection to prevent induced earthquakes.

As hydraulic fracturing has exploded onto the scene, it has increasingly been connected to earthquakes. Some quakes may be caused by the original fracking—that is, by injecting a fluid mixture into the earth to release natural gas (or oil). More appear to be caused by reinjecting the resulting brine deep underground.

In August 2011, a USGS report examined a cluster of earthquakes in Oklahoma and reported:

In March 2012, Ohio oil and gas regulators said: “A dozen earthquakes in northeastern Ohio were almost certainly induced by injection of gas-drilling wastewater into the earth.”

In April, the USGS delivered a paper at the annual meeting of the Seismological Society of America that noted “a remarkable increase in the rate of [magnitude 3.0] and greater earthquakes is currently in progress” in the U.S. midcontinent. The USGS scientists pointed out that ”a naturally-occurring rate change of this magnitude is unprecedented outside of volcanic settings or in the absence of a main shock, of which there were neither in this region.” They concluded:

While the seismicity rate changes described here are almost certainly manmade, it remains to be determined how they are related to either changes in extraction methodologies or the rate of oil and gas production.

Now the USGS is building on that work in an invited paper presented this week, Present Triggered Seismicity Sequence in the Raton Basin of Southern Colorado/Northern New Mexico. Here is the abstract:

The occurrence of an earthquake of magnitude (M) 5.3 near Trinidad, CO, on 23 August 2011 renewed interest in the possibility that an earthquake sequence in this region that began in August 2001 is the result of industrial activities. Our investigation of this seismicity, in the Raton Basin of northern New Mexico and southern Colorado, led us to conclude that the majority, if not all of the earthquakes since August 2001 have been triggered by the deep injection of wastewater related to the production of natural gas from the coal-bed methane field here. The evidence that this earthquake sequence was triggered by wastewater injection is threefold. First, there was a marked increase in seismicity shortly after major fluid injection began in the Raton Basin. From 1970 through July of 2001, there were five earthquakes of magnitude 3 and larger located in the Raton Basin. In the subsequent 10 years from August of 2001 through the end of 2011, there were 95 earthquakes of magnitude 3 and larger. The statistical likelihood of this rate increase occurring naturally was determined to be 0.01%. Second, the vast majority of the seismicity is located close (within 5km) to active disposal wells in this region. Additionally, this seismicity is primarily shallow, ranging in depth between 2 and 8 km, with the shallowest seismicity occurring within 500 m depth of the injection intervals. Finally, these wells have injected exceptionally high volumes of wastewater. The 23 August 2011 M5.3 earthquake, located adjacent to two high-volume disposal wells, is the largest earthquake to date for which there is compelling evidence of triggering by fluid injection activities; indeed, these two nearly-co-located wells injected about 4.9 million cubic meters of wastewater during the period leading up to the M5.3 earthquake, more than 7 times as much as the disposal well at the Rocky Mountain Arsenal that caused damaging earthquakes in the Denver, CO, region in the 1960s. Much of the seismicity since 2001 falls on a 15km-long, NE-trending lineation of seismicity dipping steeply to the SE. The focal mechanisms of the largest earthquakes since mid-2001 are consistent with both the direction of the seismicity lineation and the regional tectonic regime of east-west extension centered on the Rio Grande rift.

A key point is that these aren’t just micro-quakes we are talking about. A Magnitude 5.3 can do real damage.

The second paper being presented at the AGU is Fluid injection triggering of 2011 earthquake sequence in Oklahoma [Keranen et al., 2012]. Here is the abstract:

Significant earthquakes are increasingly occurring within the United States midcontinent, with nine having moment-magnitude (Mw) ≥4.0 and five with Mw≥5.0 in 2011 alone. In parallel, wastewater injection into deep sedimentary formations has increased as unconventional oil and gas resources are developed. Injected fluids may lower normal stress on existing fault planes, and the correlation between injection wells and earthquake locations led to speculation that many 2011 earthquakes were triggered by injection. The largest earthquake potentially related to injection (Mw5.7) struck in November 2011 in central Oklahoma. Here we use aftershocks to document the fault patterns responsible for the M5.7 earthquake and a prolific sequence of related events, and use the timing and spatial correlation of the earthquakes with injection wells and subsurface structures to show that the earthquakes were likely triggered by fluid injection. The aftershock sequence details rupture along three distinct fault planes, the first of which reaches within 250 meters of active injection wells and within 1 km of the surface. This earthquake sequence began where fluids are injected at low pressure into a depleted oil reservoir bound by faults that effectively seal fluid flow. Injection into sealed compartments allows reservoir pressure to increase gradually over time, suggesting that reservoir volume, in this case, controls the triggering timescale. This process allows multi-year lags between the commencement of fluid injection and triggered earthquakes.

This paper explains one of the mysteries of how these earthquakes could be tied to injection but only start years after the injection started.

It is time for regulations on unconventional drilling and wastewater injection aimed at preventing induced earthquakes.