Are Dangerous Bomb Trains Rolling Through Your City? 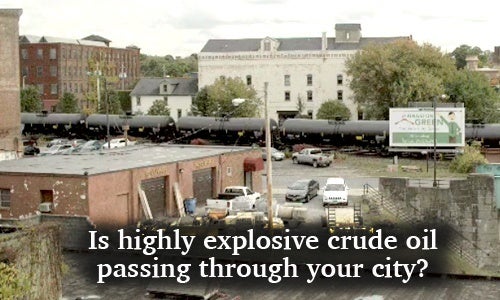 This week in Heimdal, North Dakota another “bomb train” derailed and exploded. These dangerous trains carrying crude-oil fracked in the Bakken Shale are rolling through the backyards of America, across rivers and streams and into major cities like Pittsburgh, Pennsylvania and Albany, New York.

Our Video of the Week from documentary filmmaker Jon Bowermaster exposes the daily threat that many Americans are now living with as the oil and gas industry continues its desperate and dangerous expansion of extreme fossil fuel development in America.

You can see if dangerous bomb trains are rolling through your town here.

Lee’s from Pittsburgh, so we looked them up first. Pittsburgh was the first city in the world to ban fracking and many of the most passionate fractivists on Earth come from Western Pennsylvania. Pittsburgh has bomb trains coming in and out on all sides.

It’s a terrifying map to look at.

We’ve been looking at a lot of maps recently. Maps of bomb train routes. Maps of proposed pipelines and other infrastructure projects like LNG ports and gas-fired power plants. Maps of fracking wells and areas where fracking earthquakes are popping up like crazy.

Looking at all these maps, We see each community that has been put on the fossil fuel chopping block and think about the people we know who are now forced to live their lives in these danger zones. Looking at map after map, we can also see the bigger picture of fossil fuel domination as it expands across our country, a dangerous web of pipelines and train tracks that connect fracking well pads to the rest of the world, threatening us all.

Seeing the bigger picture is a powerful thing. That’s why were starting a new series on our blog: Map of the Week. Our first post has a bunch of startling maps that show how these bomb trains may be running right through your town.

Coloradans Give Gov. Hickenlooper and State Legislature an ‘F’ for Failing to Address Fracking