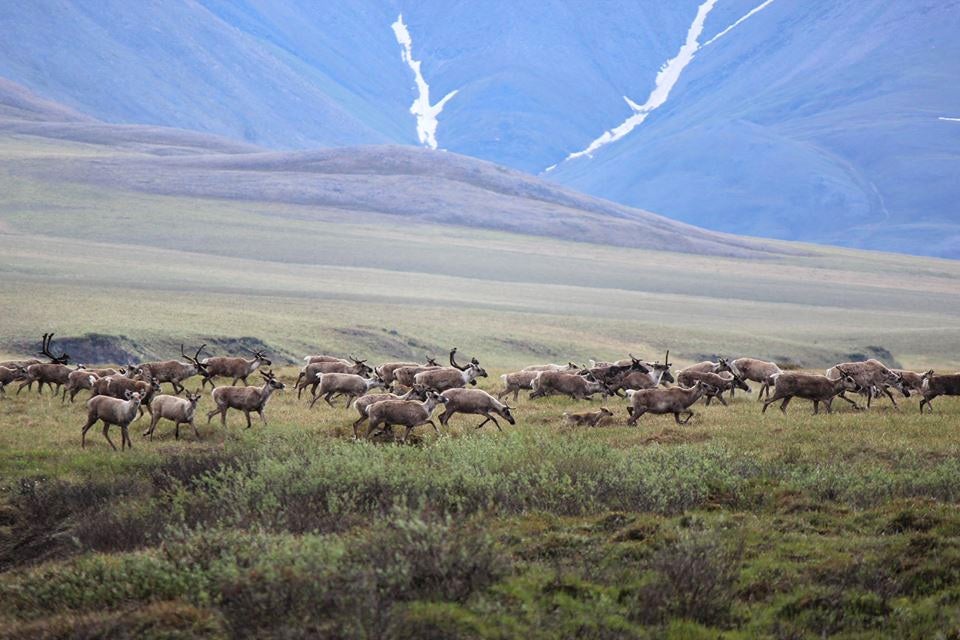 Migrations are the heartbeat of life in the Arctic National Wildlife Refuge. Groups of thousands of caribou course across the landscape as they complete the longest migration of any land animal in North America. Arctic terns appear to be avenging angels as they guard their nests on riverside gravel bars; these birds have traveled 12,000 miles from Antarctica to find the perfect nest spot and they will let you know you are not welcome nearby. And I just completed what has become my annual migration. For more than two decades I have been traveling north each summer to experience the endless daylight, vast landscapes and stunning wildlife of the coastal plain of the Arctic Refuge.

You don’t have to be a scientist to see that the coastal plain is the biological heart of our nation’s wildest refuge, but if you need the numbers—the coastal plain is the nesting ground for 200 species of birds (who traveled there from every state and six continents), the calving ground and nursery for the Porcupine caribou herd and the most important on-shore denning area in Alaska for polar bears.

Not every animal present on the coastal plain hightails it out once the snow begins to fall, some have amazing adaptations to allow them to overwinter in this severe climate. On my last trip this summer we discovered the skull of a musk ox, a prehistoric-looking shaggy critter that is able to survive the deep cold. A close examination of the skull showed the spiral nasal passages that allow the frozen air the animal breathes to travel further and have more time to warm up as to prevent perpetual brain freeze. Equally fascinating is one of my favorites, the Arctic Wooly Bear Caterpillar. These are the longest lived caterpillars on the planet. They spend 7-14 years as a caterpillar before metamorphosing into a moth. During that time they spend about seven to eight months of the year frozen like a caterpillar popsicle. The three to four months they are thawed out are spent busily munching on the Arctic tundra. It takes them all those “partial” years to store up enough energy to undergo their change.

It isn’t just the wildlife that are uniquely adapted to living in this landscape; the Alaska Native peoples who live above the Arctic Circle are intimately connected to the land and its rhythms. Every year Alaska Natives harvest, process, distribute and consume millions of pounds of wild animals, fish and plants through an economy and way of life that has come to be termed “subsistence.” Collectively, these varied subsistence activities constitute a way of being and relating to the world and thus comprise an essential component of Alaska Native identities and cultures.

The people and the wildlife of the Arctic Refuge are threatened by the double-whammy of climate change and oil development. Look at any of the recent maps that highlight where the world is warming the fastest and the Alaskan Arctic shows up as a fiery red blob. In fact the Arctic is warming twice as fast as the rest of the planet. The effects of this can be seen and felt on the ground—less water, more shrubs and trees and I’ve even noticed the change in the different species of birds showing up in the high north. Most important, the sea ice is disappearing. This disappearance spells trouble for wildlife like polar bears and the Alaska Native peoples who rely on the ice to hunt. It also has caused an increase in coastal erosion and a number of villages in the Arctic will have to be relocated or risk being washed into the sea. Scientists are telling us that the loss of this ice is leading to the unusual weather patterns we are experiencing in the rest of the world. What happens in the Arctic doesn’t stay in the Arctic.

The Canning River forms the western boundary of the northern portion of the Arctic Refuge, separating the land owned and managed by the state of Alaska around Prudhoe Bay from the coastal plain and other wildlands of the Arctic National Wildlife Refuge. It had been three or four years since I had last floated the Canning to the mountains, across the 30 miles of coastal plain to the coast of the Arctic Ocean. This is one of my favorite rivers, delivering a wide array of landscapes and incredible wildlife from wolves and grizzly bears in the mountains and plains, to snowy owls, yellow billed loons, golden plovers and eiders in the delta and coast. This summer I was dismayed to see a new oil field development rising ominously out of the tundra. Point Thompson is the newest and easternmost expansion of Prudhoe Bay and sits just a dozen or so miles from the edge of the Arctic Refuge. With the flat topography of the coastal plain this industrial site mars the wild character of the land.

This was a wake-up call for me. During the Bush presidency millions of Americans took action to protect the refuge and convinced the decision makes in Washington DC to say no to drilling in the refuge. This place has felt safe from drilling for the past 10 years, but here is a brand new oil field knocking on the door of the coastal plain. Now is not the time to be complacent; now is the time for action.

As a wilderness guide I have had the honor and good fortune to be able to share this special place with adventurers from across the U.S. Over the years I’ve traveled through this landscape with teachers, machinists, conservationists, veterans, musicians, artists, people from all walks of life and all corners of the country. To a person they have been moved by what they experienced. And many of them have been moved to take action and reached out to key decision makers to say that the coastal plain of the Arctic Refuge deserves to remain forever wild. A collection of their actions can be seen here.

Now is the time, before the oil fields creep one inch closer to this treasured landscape, to raise our voices and protect the this place once and for all.