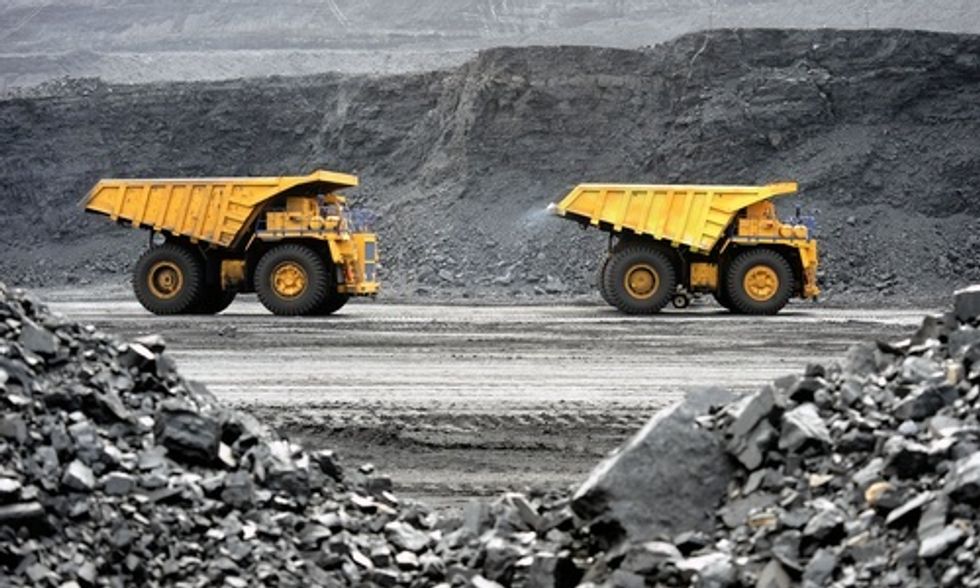 Today, Arch Coal, the nation's second-largest coal producer, filed for bankruptcy. The news comes after Arch Coal missed a debt payment on Dec. 15, 2015, triggering a 30-day countdown to a Chapter 11 filing. Arch was recently served with a delisting notice from the New York Stock Exchange after its trading priced dropped to less than one dollar per share.

The news is the latest in a series of blows to the coal industry. Alpha Natural Resources, Patriot coal and Walter Energy have all filed for bankruptcy protection recently. Fitch Ratings says that Peabody—the nation's biggest coal company—could be next.

Arch aims to restructure $4.5 billion worth of debt. Its stock price has fallen 99 percent over the last year. In November, it reported a $2.1 billion third quarter loss. Like most existing major U.S. coal companies, Arch made massive and ill-advised acquisitions at the zenith of the coal market, paying $3.4 billion for International Coal Group in 2011.

Let's hope that Arch employees and their families don't endure the same fate as those of Patriot coal, which was spun off by Peabody largely as a way to get rid of "legacy" obligations like pensions.

Arch claimed today it has reached a deal with creditors to help meet payments and that operations will not suffer.

Yet one thing that will certainly suffer is the company's ability to meet its obligations to reclaim land despoiled by mining. As Arch Coal begins the bankruptcy process, regulators and elected officials must do more to guarantee taxpayers are not left holding the bag for hundreds of millions of dollars in clean-up costs at Arch's coal mines, which have scarred the landscape, damaged critical watersheds and added to the carbon pollution problems the administration is working hard to address.

Mining companies are not being held accountable for failing to protect and restore public lands to their original state, as is required under federal law. Only 10 percent of disturbed lands mined in Wyoming, Montana and North Dakota have met reclamation requirements. The debt owed back on these lands is astronomical; the largest mines have reclamation bonds in excess of $300,000,000 a piece.

"In short, if the coal company goes bankrupt, the state or federal governments—that is, we, the people—might have to pay to clean up the company's messes," Clark Williams-Derry of sightline.org, writes.

More should be done to secure financial commitments from mining operations that are either one step away from—or in—bankruptcy. As of last week, Arch was still pushing for the right to strip coal from Montana. Earlier this month, the company announced its intention to pursue a permit for the controversial Otter Creek Mine located in Southeastern Montana. In the past, Montana's Department of Environmental Quality said the proposal won't move forward until the company addresses hundreds of deficiencies in their permit application. Yet in early December 2015, Arch resubmitted its mining permit application to the state agency, as if it's a good idea to give a company that can't pay its debts permission to mine the 1.4 million tons of coal found in Montana's beautiful Otter Creek Valley.

The odds of that mine getting permitted are so low that the Tongue River Railroad Company, which hoped to connect the coal from Otter Creek Mine to points west for export overseas, requested that the state suspend its permit application to build a railroad. Given the collapsing coal economy, there's simply no need for a railroad, especially given that this project is opposed by the many folks it would negatively impact, including ranchers, the Northern Cheyenne Tribe, local landowners and even coal miners who would lose their jobs at other mines if the Otter Creek Mine is permitted.

Even if Arch wasn't in bankruptcy, mining the coal found in Otter Creek and building the Tongue River Railroad is a bad idea for Montana and the world. Market forces and bad management are pushing big coal companies farther towards the margins.

Now is the time to reform America's coal program. We need to align our nation's long-term energy supply decisions with our climate objectives. And that means managing our federal lands—held in the public trust—to prioritize clean energy, not opening new areas to more fossil fuel extraction that digs the carbon hold deeper while degrading our natural heritage.