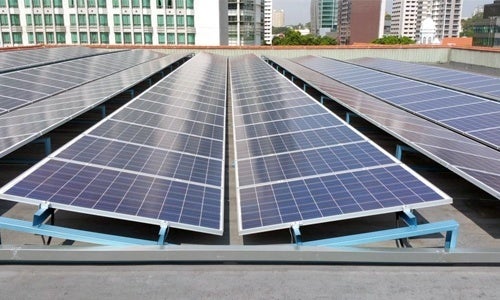 Apple’s operations in Singapore will be completely solar powered by January 2016. Solar energy developer Sunseap Group announced Sunday that it will partner with Apple to supply all of its energy needs from solar systems atop more than 800 buildings in Singapore.

This makes Apple the first company in Singapore to run entirely on renewable energy, marking yet another first for the increasingly green company. It eventually wants to operate its facilities around the world on clean energy.

“Climate change is one of the great challenges of our time, and it’s going to take determination and innovation to make the much needed transition to a green economy,” said Lisa Jackson, Apple’s vice president of environment, policy and social initiatives. “This deal will cover all of our electricity needs in Singapore, including our 2,500-person corporate campus and new retail store.”

One of Apple’s largest overseas presences is in Singapore. Now those facilities, plus the first Apple retail store in the city, will be powered by the sun. The rooftop solar panels will be placed on both public buildings and Apple’s facilities and will generate 50 megawatts of solar energy, or enough to power 9,000 homes.

Sunseap Managing Director Frank Phuan believes Apple’s leadership will inspire other companies to follow suit. “We expect a ripple effect for organizations in Singapore to incorporate sustainability practices in their businesses,” Phuan said.

“Many Asian countries such as Taiwan, South Korea and China have electricity supplies dominated by fossil fuels, and monopoly energy companies that offer little or no options for sourcing renewable energy. Apple’s innovative solutions to this challenge show how more companies can and should do the same.

“Singapore also hosts data centers from Microsoft, Google and Amazon, and as millions more internet users come on line in Asia every month, internet companies are looking to expand energy intensive infrastructure across the region. As important customers of energy utilities and prestigious projects for governments, these companies can use their influence to expand renewable energy in the region.

“By matching that expansion to demand for new renewable energy, Microsoft, Google, Amazon and others can play a critical role in showing how the Asian internet expansion can be a powerful force for a better planet.”

The move is just the latest among Apple’s sustainability efforts. Just last month, the company announced plans to build 200 megawatts of solar energy projects in China and vowed to help its suppliers to produce more renewable energy. Apple also partnered with First Solar to build a 280-megawatt solar farm in Monterey, California to power its Silicon Valley campus and other facilities.

All of Apple’s data centers, stores and offices in the U.S. run on 100 percent renewable energy. And the company’s current CEO Tim Cook has even told climate-denying shareholders to “get out of stock.”