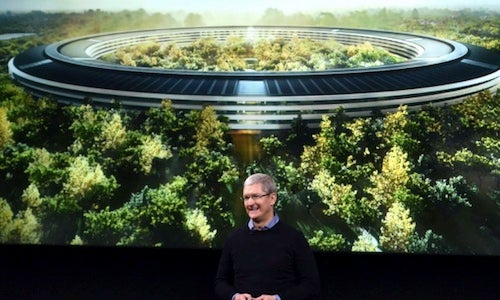 Apple is seeking to sell a whole different product. No, not cars—yet. Try renewable energy. The iPhone maker has created an energy subsidiary in Delaware called Apple Energy LLC to sell surplus electricity generated by its various renewable energy projects.

Documents seen by PV Tech show that Apple has applied to the U.S. Federal Energy Regulatory Commission (FERC) to sell excess power from solar panels on top of its Cupertino, California headquarters as well as energy generated by its solar farms, hydroelectric plants and biogas facilities across the country.

This is big news. Most corporations usually sell surplus energy to power companies, but the tech titan is basically creating a green energy pipeline to consumers.

“If Apple’s application is approved, it will be able to sell electricity directly to its customers—eliminating the need for utility power,” PV Tech observed.

In the FERC filing, Apple has requested to sell energy at market rates rather than wholesale since it’s not an major energy company and cannot influence electricity prices, PV Tech noted.

“Applicant seeks the same blanket authorization and waivers of the commission’s rules and filing requirements previously granted to other entities authorized to transact at market-based rates,” Apple’s tariff states.

Apple has requested the tariff be granted within 60 days of its June 6 filing, so we’ll have to wait until then to see if it takes off.

In recent years, Apple has worked hard to shrink its global carbon footprint, and CEO Tim Cook is known for being a green leader.

“Climate change is one of the great challenges of our time, and the time for action is now,” Cook said. “The transition to a new green economy requires innovation, ambition and purpose.”

The company boasts that all its data centers and most of its stores and corporate offices are now powered by green, renewable energy. Apple has plans for 521 megawatts of solar projects globally, as well as other investments in hydroelectric, biogas and geothermal power, which generates enough power to cover 93 percent of its worldwide energy usage. The company wants to eventually operate with 100 percent renewable energy.