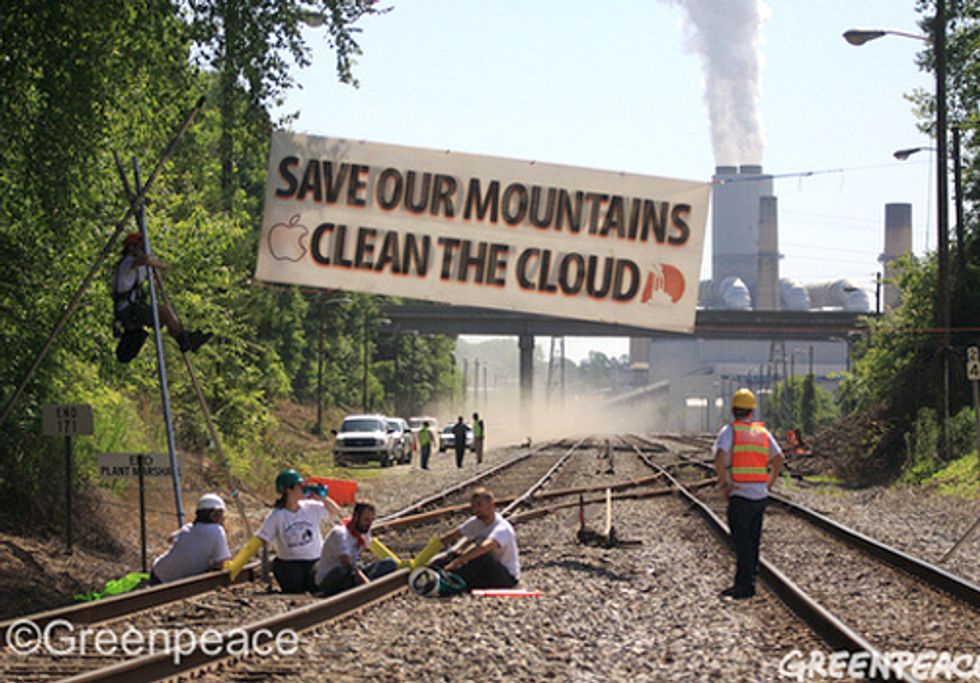 Apple’s clean energy policies have significantly improved, but the company still gets low scores for its energy choices when compared with sector leaders, a new Greenpeace International analysis reveals.

Despite a welcome commitment by Apple in May that its data centers will be coal-free and powered by 100 percent renewable energy, the analysis reveals that Apple still lacks a plan that outlines a realistic path to eliminate its reliance on coal to power its iCloud.

The analysis, “A Clean Energy Road Map for Apple” is a follow-up evaluation to Greenpeace International’s April “How Clean is Your Cloud?” report, which ranked companies such as Amazon, Microsoft and Apple on their renewable energy policies.

This latest analysis updates the scores to account for Apple’s new announcements and found that Apple’s plans to make its three existing data centers “coal-free” are still far from complete.

“Apple has the potential to set a new bar with its coal-free iCloud commitment, but its plans to reach this goal are still mostly talk and not enough walk,” said Greenpeace International senior IT analyst Gary Cook.

“Apple got a lot of kudos and positive attention for its clean energy commitments in May, but it now must explain to its customers how it plans to fully eliminate its dirty energy sources, and should extend that policy to new data centers as its iCloud expands.”

Apple’s clean energy score improved to 22.6 percent from 15.3 percent, and its grades in the “Renewables and Advocacy” and “Energy Efficiency and Greenhouse Gas Mitigation” categories correspondingly improved to Cs from Ds. However, Apple received a D for its “Energy Transparency” and a D in the “Infrastructure Siting” category.

Apple’s coal and nuclear energy scores decreased, but could go down more if Apple were to reveal viable plans for how it will power its rapidly expanding data centers without the use of coal. It now uses 33.5 percent coal energy to power its cloud, down from 55.1 percent in April, and 11.6 percent nuclear energy, down from 27.8 in April according to its own data.

The analysis includes a checklist for how Apple can make good on its coal-free iCloud pledge. Apple says solar panels and fuel cells will provide 60 percent of the electricity for the first phase of its data center in North Carolina, and will turn to regional renewable energy providers for the remaining 40 percent.

However, since Apple will have to buy that electricity from Duke Energy, the only electric utility in the area–and one which also relies heavily on coal–Apple cannot be coal-free without pushing Duke toward that goal as well.

Apple should instead use its buying power as one of Duke Energy’s anticipated top 10 customers to demand that Duke provide it with clean energy, not mountaintop removal coal.

In May, activists from Greenpeace and other organizations blocked a train carrying coal to a Duke Energy coal-fired power plant and branded the train cars with the Apple logo in order to draw attention to the fact that Apple’s growing iCloud will be powered by more coal as its Maiden, N.C., data center expands

“Apple, as a client of Duke Energy, is an accomplice to the health emergency caused by mountain top removal mining in Appalachia,” said Mickey McCoy, a mountaintop removal activist in Kentucky. “If Apple wants to be part of a clean energy future, it should demand that Duke abandon coal from mountaintop removal that is killing people and destroying communities in central Appalachia.”

“It’s great that Apple is putting up solar panels, but as long as they’re buying electricity from Duke, they’re part of the coal problem, and that means more bad air days for North Carolinians,” said Beth Henry, a Charlotte resident who has been actively fighting against Duke’s pollution. “We need Apple's help to push Duke away from coal and into clean renewable energy in North Carolina.”

More than 250,000 customers of Apple, Amazon and Microsoft have written to the companies asking for a cleaner cloud since Greenpeace launched its Clean Our Cloud campaign on April 18.