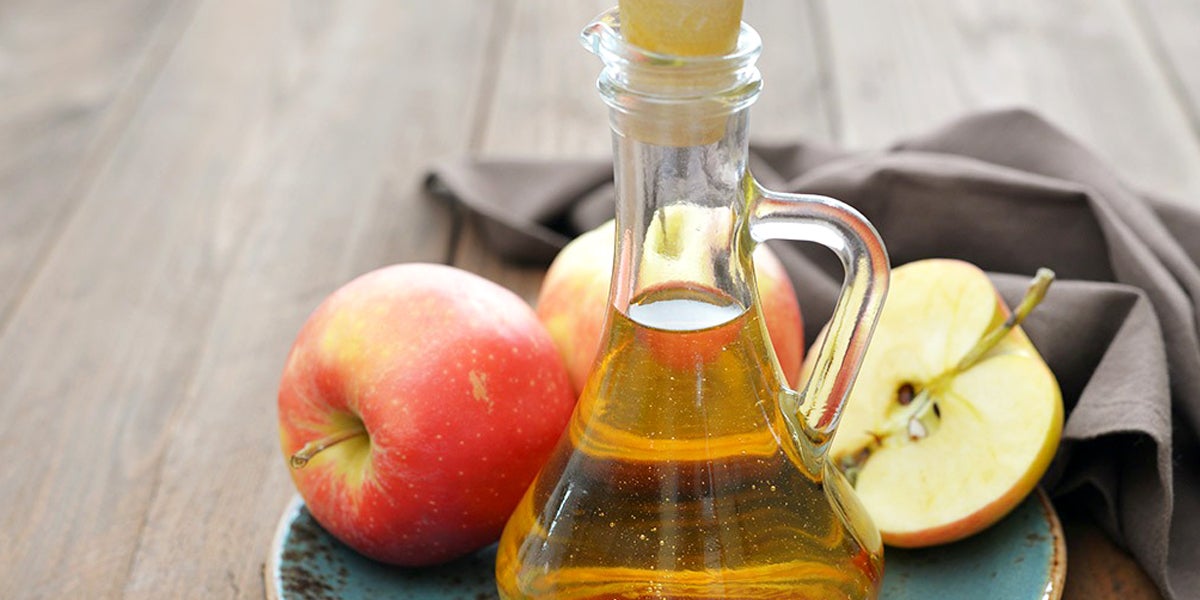 Apple cider vinegar is a kitchen staple that has several impressive health benefits.

Interestingly, it also has a ton of different beauty, household and cooking uses. 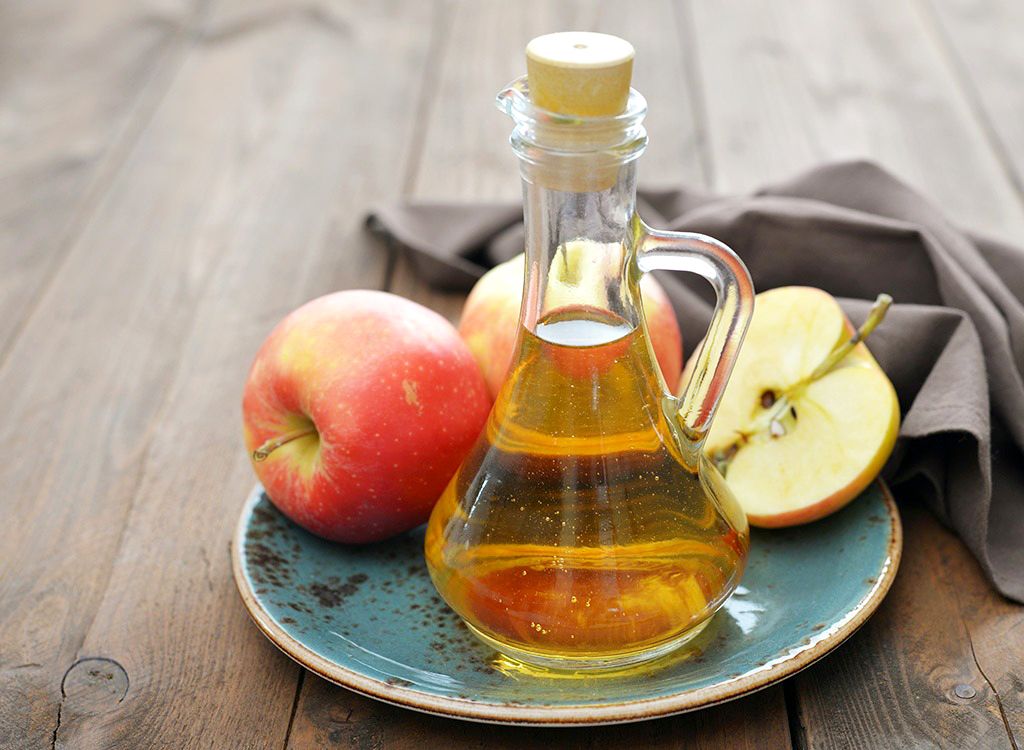 Apple cider vinegar is a kitchen staple that has several impressive health benefits.Shutterstock

It can also be used in all sorts of recipes, including salad dressings, soups, sauces, hot drinks and more.

Here are 30 ways to use apple cider vinegar.

However, if you’re on medication for diabetes, you should check with your doctor before taking apple cider vinegar.

2. To Help You Feel Full

This is because it may help you feel full.

However, its long-term effects on weight loss are unknown and likely to be small unless other dietary and lifestyle changes are also made (2).

Just like other types of vinegar, apple cider vinegar is an effective preservative.

In fact, people have used vinegar as a pickling agent to preserve foods for thousands of years.

It works by making the food more acidic, which deactivates its enzymes and kills any bacteria in the food that may cause spoilage.

Apple cider vinegar is known to have antibacterial properties.

Because of this, it’s often claimed that apple cider vinegar can eliminate bad smells.

There isn’t any research to back up these claims, but you can try it out by mixing apple cider vinegar with water to make a deodorizing spray.

This makes a natural alternative to odor neutralizers.

You can also mix it with water and Epsom salts to make a foot soak, like this. This may help get rid of unwanted foot odor by killing off odor-causing bacteria.

5. To Make a Salad Vinaigrette

One easy way to use apple cider vinegar is to make a simple salad dressing.

Homemade salad dressings can be much healthier for you than store-bought ones and they’re often tastier too.

6. To Lower the Risk of Cancer

Some observational studies, which can’t prove causation, have also linked consuming apple cider vinegar with a decreased risk of esophageal cancer. However, other studies have linked it with an increased risk of bladder cancer (16, 17).

Overall, there is insufficient evidence to make any claims regarding the effects of apple cider vinegar on the risk of cancer.

7. To Make an All-Purpose Cleaner

Apple cider vinegar is often a popular choice for a natural alternative to commercial cleaning agents. This is because of its antibacterial properties.

Mix 1 cup of water with half a cup of apple cider vinegar and you’ll have a natural all-purpose cleaner.

However, it’s worth noting that although vinegars such as apple cider vinegar can kill some bacteria, they aren’t as effective at killing harmful bacteria as commercial cleaning agents (18).

8. To Soothe a Sore Throat

It’s thought that its antibacterial properties could help kill off the bacteria that could be causing the problem. However, there is no evidence to support its use in this way.

If you try this at home, make sure you mix the vinegar with water before gargling.

This is because apple cider vinegar is very acidic and has been known to cause throat burns when consumed undiluted (19, 20).

9. As a Facial Toner

As such, many people like to use apple cider vinegar to make a skin tonic.

The general recipe is 1 part apple cider vinegar to 2 parts water. This is then applied to the skin using a cotton pad. However, if you have sensitive skin, you may want to make a more diluted solution.

Fruit flies can be a pest.

Simply pour some apple cider vinegar into a cup, add a few drops of dish soap (so that any trapped flies sink) and you’re good to go.

Adding vinegar to the water you use to boil or poach eggs can help you produce consistently good eggs.

This is because the protein in egg whites firm up more quickly when exposed to a more acidic liquid (21, 22).

When you’re poaching eggs, you want the egg whites to firm up as quickly as possible so that the eggs keeps their shape.

Using vinegar when boiling eggs can also speed up the coagulation or clotting, of the egg whites. This can be useful if the shell cracks while the egg is being boiled.

Another way to use apple cider vinegar when cooking is to make a marinade.

In fact, apple cider vinegar is a popular ingredient in many steak marinades, as it gives the meat a nice sweet and sour flavor.

Combine it with wine, garlic, soy sauce, onion and cayenne pepper, like in this recipe, to give your steak a delicious flavor.

13. To Wash Fruits and Vegetables

Pesticide residue on fruits and vegetables can be a concern for many people.

That’s why some people like to wash their fruits and vegetables in apple cider vinegar. The hope is that it’ll remove more of the chemical residues than water alone.

Although it’s not entirely clear if it will remove more pesticides than simply washing with water, it may help kill any dangerous bacteria on food.

For example, washing foods in vinegar has been shown to remove dangerous bacteria like E. coli and Salmonella (23, 24, 25).

You can also use apple cider vinegar to clean dentures.

Although there’s no consensus on the best method to clean dentures, it’s thought that the residues left by apple cider vinegar could be less harmful to the skin in your mouth than other cleaning agents (26, 27).

For the same reasons people like using apple cider vinegar as a homemade facial toner, they also like using it in the bath.

If you want to try it, add 1–2 cups of apple cider vinegar to your bath water and enjoy a soak in your tub.

An apple cider vinegar hair rinse is said to remove product buildup, detangle and add shine to your hair.

Try mixing 1 part apple cider vinegar with 1 part water and pour the mixture over your hair. Leave it in for a few minutes before washing it out.

If you have sensitive skin, then you should try doing this with a weaker dilution first, as the vinegar is quite acidic.

17. As a Dandruff Treatment

Massaging diluted apple cider vinegar into your scalp may help get rid of dandruff.

It’s unclear how effective this is, but the theory is that the acid in the vinegar could help stop the growth of the fungus Malassezia, which may contribute to dandruff.

Apple cider vinegar can be a great ingredient for a tangy sauce for your food. Try adding it to tomato-based sauces to give them a fuller flavor.

Adding vinegar to soup can help bring its flavors to life.

If your favorite homemade soup tastes a little bland, try adding a little vinegar to it at the end. Add it gradually until the soup tastes great.

Another great use for apple cider vinegar is as a homemade weed killer.

Spray undiluted vinegar on unwanted weeds in your garden to get rid of them. You can also try mixing it with soap and lemon juice to see if that makes it more effective.

21. In Homemade Cakes and Candies

Apple cider vinegar is a popular flavor and texture enhancer in baking, especially when making vegan treats that can’t include eggs.

It can also add extra flavor to homemade candy and caramels, like in this recipe.

Apple cider vinegar is often said to be a useful alternative to commercial mouthwashes.

Its antibacterial properties may help with bad breath, although there aren’t any studies examining how effective it is.

If you try this, make sure you dilute it well with water (the usual amount is 1 tablespoon for every cup or 240 ml, of water), as the acidity of the vinegar could damage your teeth (28).

24. To Clean Your Tooth Brush

To have really clean teeth, it’s worth considering how clean your toothbrush is.

Given that apple cider vinegar has antibacterial properties, you can use it as a homemade cleaner for your toothbrush.

To make your own toothbrush cleaner, mix half a cup (120 ml) of water with 2 tablespoons (30 ml) of apple cider vinegar and 2 teaspoons of baking soda and mix well. Leave the head of your toothbrush in the mix for 30 minutes.

Make sure you rinse your brush well before you use it, as the acidity of undiluted vinegar could damage your teeth.

Apple cider vinegar is acidic, so some people like to use it to remove stains and whiten their teeth.

To try this, rub a small amount of apple cider vinegar onto your teeth with a cotton swab. The results aren’t instant, but repeated use could remove stains over time.

However, be wary of this method for teeth whitening. Be sure to rinse out your mouth really well afterward, as the acid can damage the enamel on your teeth (29).

Dabbing small amounts of diluted apple cider vinegar onto pimples is claimed to be a good way to get rid of them.

However, undiluted apple cider vinegar is strongly acidic and putting it directly onto your skin can cause burns (30, 31).

As with acne, apple cider vinegar is claimed to be a natural agent for getting rid of warts. It’s likely effective for removing warts from skin due to its acidic nature.

However, be aware that this method is very painful and some people who’ve tried it have required a local anesthetic (32, 33).

28. As a Natural Deodorant

Wiping your underarms with diluted apple cider vinegar is said to be a homemade alternative to commercially produced deodorants.

That said, although it’s popular in some circles, it’s not clear how effective it is.

Rinsing your dishes in apple cider vinegar could help kill off any unwanted bacteria and keep them clean.

Apple cider vinegar may help prevent your pet from getting fleas.

It’s thought that spraying a mixture of 1 part water and 1 part apple cider vinegar onto your pet will create an environment that fleas won’t want to hang around in.

Apple cider vinegar is an extremely versatile household item that has a ton of different uses.

It can be a cheap and easy way to tackle many problems around your home.