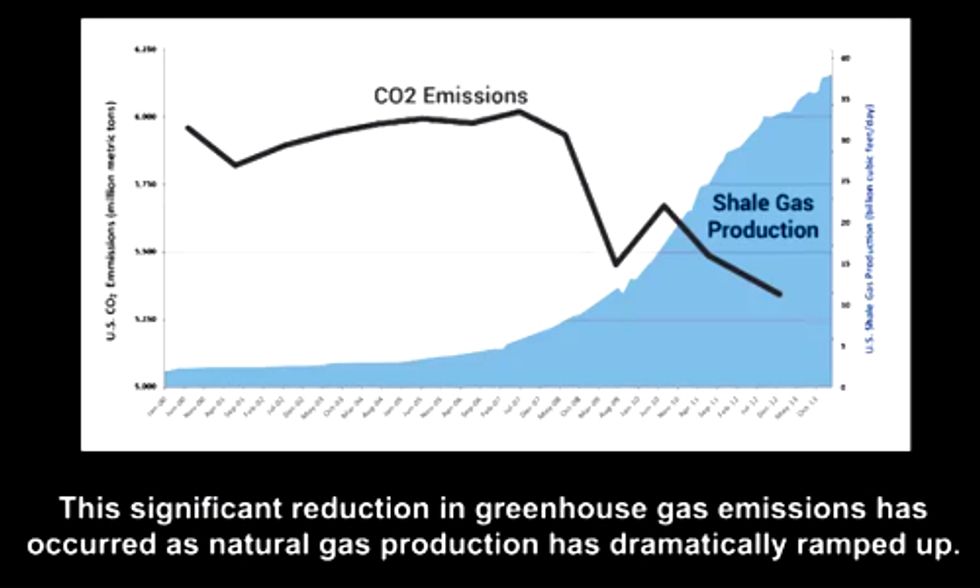 It would have been hard to miss the reports of earthquakes, explosions, lack of clean air, nosebleeds and more attributed to fracking.

These type of stories have been all over every form of media imaginable in recent years.

But according to Energy In Depth (EID), a campaign launched by the Independent Petroleum Association of America, those stories have apparently been drowning out the real story—that fracking is somehow responsible for the drop in carbon dioxide emissions.

Yes, this group actually released a video on Earth Day thanking shale gas and fracking for decreasing emissions. You have to see it—and its out-of-context remarks and data—to believe it:

The Natural Resources Defense Council also found the video to be off-base, tweeting as much Tuesday morning. That led to a back-and-forth between the organizations, in which EID revealed that it didn't understand the concept of fracking sacrificing communities.

Reducing CO2 is offensive? Odd. RT @NRDCYouth: This #EarthDay video from @EnergyInDepth is beyond offensive http://t.co/gGToDj21JV

@EnergyInDepth Didn't say that. Reducing CO2 is key. But connecting #fracking 2 #earthday when communities are being sacrificed is wrong.

.@NRDCYouth You claim our video is "offensive," then say communities are being "sacrificed" due to fracking? Fascinating.

The video in question includes commentary and data from the likes of President Barack Obama and the U.S. Energy Information Administration. While both have argued for natural gas, neither has noted fracking as a safe or responsible means of acquiring natural gas, likely because it isn't.

The Daily Show with Jon Stewart recently included pro-fracking arguments in a recent segment, but that was a parody. Sadly, this ill-timed video of gratitude dedicated to fracking was not.