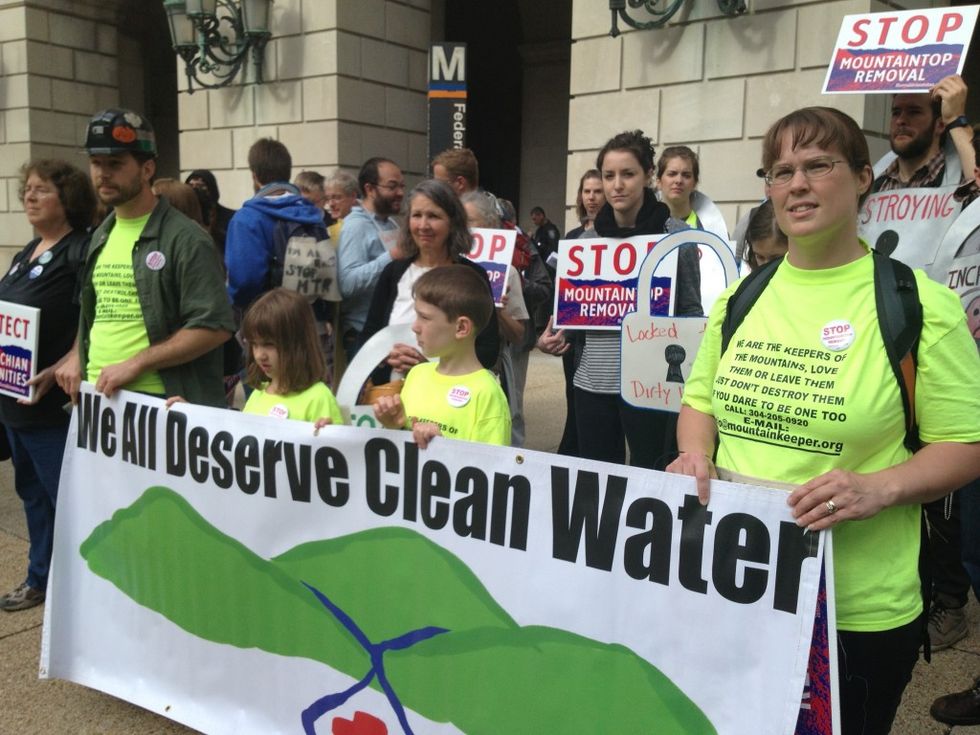 Citizens from across the country traveled to the nation’s capitol today to urge an end to mountaintop removal coal mining, a radical form of strip mining in Appalachia that has destroyed more than 500 mountains and buried or poisoned more than 2,000 miles of streams in Central Appalachia.

Today, dozens of Appalachians brought hundreds of gallons of toxic water from their homes to the U.S. Environmental Protection Agency in Washington, DC, demanding clean water and an end to mountaintop removal coal mining.

Citizens met with lawmakers on Capitol Hill as well as the Obama Administration agencies. This year they collected toxic water from their home communities, and brought containers of it to the U.S. Environmental Protection Agency (EPA). Citizens of Appalachia are sat on the U.S. EPA steps to demand that the EPA accept the water and acknowledge their demand for stronger water quality rules. There are more than 100 gallons of brown, black and red water that have been collected from water sources in Virginia, West Virginia and Kentucky.

“We want to show them exactly what the water situation is in the Appalachian region. This is what people deal with coming out of their faucets. We are being asked to use toxic water for drinking, washing and cooking,” said Laura Miller, who traveled from southwestern Virginia.

Citizens hope that bringing the dirty water to the EPA will alert agency officials to the urgency of toxic water in their communities. More than 20 peer-reviewed studies have shown devastating health impacts. Citizens near mountaintop removal are 50 percent more likely to die of cancer and 42 percent more likely to be born with birth defects compared with other people in Appalachia.

“There is no longer the luxury of time—we need the EPA to act now because people are sick and dying now,” said Dustin White, community organizer with Ohio Valley Environmental Coalition (OVEC) who traveled from West Virginia.

Water contamination from surface mining is widespread throughout the Appalachian region and state regulatory agencies continue to allow companies to further destroy water resources. In southern West Virginia alone, more than 22 percent of the streams can be classified as impaired under state guidelines due to surface mining. The state governments have lied about the widespread pollution and continually fail to hold the coal companies accountable.

In a response to the state governments’ willful neglect to protect these waterways, a host of organizations, many represented in Washington this week, are petitioning the EPA for a rule-making that would set a water quality standard on mountaintop removal pollution.

“Sometimes the water runs orange, and you wouldn’t want to touch it, much less drink it. But what’s more dangerous is when toxic water from your tap looks and smells totally fine," said Josh May of Magoffin County, KY, a member of the Stay Together Appalachian Youth (STAY) Project. "People sometimes drink it for years without knowing that they’re drinking toxic water and that’s what’s making them sick. We are bringing this water to the EPA as a way of holding them accountable. We’re having them sign for it so that they can formally acknowledge the problems that we’re living with everyday in the mountains.”

Citizen pressure for the EPA to increase action on the issue comes shortly after Senators introduced legislation that would limit EPA’s authority to protect Appalachia’s water quality. An appeals court recently overturned a lower court ruling, affirming the EPA’s power to retroactively veto the Corps’ mountaintop removal pollution permits. This ruling revokes a permit that would have buried nearly seven miles of streams at a 2,300-acre mountaintop removal mine in Logan County, WV.

“We are here today to stand up for Appalachia, but the struggle for safe environment crosses all boundaries. Our fight is the one and the same as the Navajo Dine’ resisting coal mining on Black Mesa and inner-city communities of color fighting coal-fired power plants. Everyone deserves clean air and water,” said White.

This event comes at the end of several days of meeting with numerous agencies in the Obama Administration as well as Congressional offices, where citizens encouraged lawmakers to support the Clean Water Protection Act, a bill which would enact some basic protections for Appalachian streams.

This year's event was the eighth annual trip to Washington, D.C. In 2012, dozens of citizens took part in sit-ins in their legislators offices demanding that they take action to end mountaintop removal and protect citizen health. Twenty-one people were arrested as a result of the sit-ins last year.