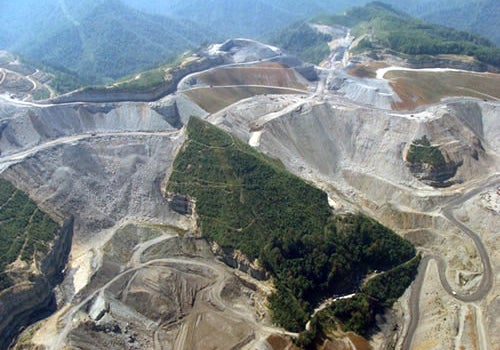 After serving her country as a major in the U.S. Army for 22 years, tending to injured soldiers as a case manager in other parts of the country, registered nurse Marilyn Mullens is now leading a group of her fellow Appalachian women to the West Virginia state capitol on Memorial Day to protest the growing humanitarian crisis of mountaintop removal mining (MTR).

In a dramatic action to symbolize that “our mountains that have been stripped of everything living on them, and in solidarity with our people, who are sick and dying and dead because of this practice,” Mullens and a group of coalfield mothers, daughters and activists will shave their heads to call out the bald face complicity of Big Coal-bankrolled state politicians and the denial of the devastating health and human rights violations in coal mining communities.

“We’ve gone through all the official channels of every level of our state government, we’ve been to DC, nothing is being done,” Mullens said in a press release. “Silence is louder than words. We’ve talked and talked and talked, but it hasn’t gotten us where we need to be with this issue. You have air pollution, water pollution, the destruction of so many living things—it’s a bigger deal than people think. I mean they are actually destroying a culture of people. It’s not what my grandparents would have wanted. And I know, the old coal miners, they don’t like it—they think it is horrible. We are the majority but our voices are drowned out by big coal money. It’s like they shove their money down our throats. The politicians completely ignore us.”

While state politicians, including Gov. Earl Ray Tomblin, often cry that President Obama has carried out a “war on coal” in central Appalachian states, the truth is that coal mining jobs have actually increased to ranks not seen since 1993, and mountaintop removal operations have not slowed to a trickle, as Big Coal sycophants claim.

The real casualties in coal mining communities, as Mullens and other mothers point out, are children, women, the elderly and other residents living on the toxic frontlines of strip mining fallout.

In advance of Monday’s silent protest, Mullens agreed to answer a few questions on her coal mining community and background, mountaintop removal, and the role of women in Appalachia today:

Jeff Biggers: Can you describe your Boone County community, the level of strip mining and the general impact of MTR on your daily lives?

Marilyn Mullens: The community I grew up in is your typical coal mining hollow in Appalachia. The hollow was four miles long and many people lived in row houses that side almost side by side. Being a child there was wonderful. The mountains were our playgrounds. We built cabins, played in creeks and did a lot of exploring. I moved back to this hollow in 1993 with my two young children. In the latter part of the 90’s the coal companies began doing MTR on both mountains that surrounded the hollow. There were extremely loud blasts that would shake pictures right off your walls. Large trucks traveled the once quiet road carrying heavy equipment. There was a fine gray dust that covered everything. It was even hard to have any flowers on your porch in the summer because the dust would just cover the leaves. You literally had to pressure wash your house about every two weeks to get the dust off of your windows, etc. People’s homes were damaged and even though the coal companies said they would “make good” on any damage when it came down to it they would usually find a way to say they were not responsible. In 2001 we had a heavy rain. The hollow flooded and many of my friends and family lost their homes. Most people know it was due to the MTR. Not many people there have education past high school but we are not stupid. We know that when you clear cut all the trees and vegetation then get rid of the top soil and bury the natural course of the streams there is nothing there to hold or guide the water. Plus they build big “ponds” back on the mountain that are held back by earth and these broke free. Once again the coal company said the floods were “an act of god.” Honestly sometimes you feel as though you are in a war zone when you live in the middle of MTR.

JB: What’s the symbolism of shaving your head? A reference to cancer corridors in the coalfields—as you know, a door to door survey of 769 adults found that the cancer rate was twice as high in a community exposed to mountaintop removal mining compared to a non-mining control community—or a broader view of the denuding and stripping of the Appalachian mountains or something else?

MM: For me shaving my head will show the pain I feel when I see what is being done to not only our mountains but our people. These mountains have so much life in them and when they do MTR ALL of that life is stripped away. Studies show that MTR is making our people sick. They are sick and dying and it seems that for most our lives are not worth their electricity and the money that “big coal” puts into people’s pockets. I guess I am hoping that by shaving my hair I will show that I will do something very drastic to get someone’s attention that might be able to help us stop this horrible practice.

JB: How do you see this action as part of a long-term movement to raise awareness of the egregious impacts of MTR and the need to abolish the practice?

MM: There have been Appalachians fighting this for many years before I got involved. People like Larry Gibson, Maria Gunnoe, Judy Bonds, Bo Webb, Lorelei Scarbro. These are the people that have been in the trenches paving the way for the rest of us. Giving us the courage to have a voice. I only see the movement growing. I had a coworker approach me early this week that had never seen MTR up close. She and her friends happened upon a site and when they questioned the guard that was blocking the road due to blasting why they could not travel a road that they always travel to a friend’s house he responded, “I guess you’re some of the activist people.” Her response was, “no actually I not until now.” So there are still Appalachian people that have no idea the extent of the devastation. I think the more eyes we get open the more the movement will grow. Sooner or later the shear volume of those of us will have to make someone listen.

JB: Considering that MTR effectively began in 1970 in Raleigh County—of course, strip mining has been going on for over a century—do you consider yourself a daughter and a mother of the “mountaintop removal generation” and its fallout in your communities, and how do you discuss it with your children and family?

MM: Yes, I consider myself a daughter and a mother. My parents still live in the coal fields where this is happening. Their lives are in danger every time they go to Whitesville to grocery shop. At any time I expect to hear that the Brushy Fork impoundment (coal slurry earthen damn holding over 8 billion gallons of toxic coal slurry) has broken free and people are dead. My children lived right in the middle of the MTR breathing the dust for several years. I wonder what long term affects it will have on their respiratory system. I have always taught my children to live a healthy lifestyle. I never let them be exposed to cigarette smoke, encouraged a healthy low fat diet and exercise but I had no control over the dust they breathed for many years. The underground miners are provided with respirators but the people living in the valleys where the dust settles are not afforded that luxury. My immediate family is against MTR and they support me being active in stopping it but they are afraid for me. There have been threats and acts of violence towards many people in this fight. I worry sometimes about repercussions towards my parents who are getting along in years and still living in the middle of it all but I explain to them that I feel compelled to fight this not only for them but for all the people in West Virginia. Especially the children. I want our children to be able to live here and know the mountains I knew them growing up.

JB: Speak a little about the role of Judy Bonds and other women in taking a leading role to stop strip mining and MTR, and confront corruption in West Virginia?

MM: Very hard to speak of Judy without tears in my eyes. I did not know her personally but as heroes go she is a TRUE HERO. She was brave enough to stand up when standing up was out of the question. She, Maria Gunnoe and Lorelei Scarbro are all from my community and I have more admiration for them than I can put into words and I thank them for their bravery. Appalachian women have always held a strength beyond measure. My grandmother was born and raised in West Virginia and she never backed down from a fight and I know she would be mad as hell about what is going on here. So part of what I do I do in her memory and I hear her saying, “you stand up for what is right no matter what because at night time you have to be able to lay your head down and sleep.” I feel like there is so much corruption in this state in all aspects of our government and law enforcement and the root of all of it is the money that the coal industry keeps putting in their pockets. It will come out sooner or later though. We will see to it.

JB: During the 2008 presidential campaign, Hillary Clinton told West Virginians she was concerned but that perhaps we could find ways to reclaim the land after MTR operations. How would you respond to her now?

MM: “Wreck” lamation is a joke. There is no reclamation. I am convinced that if a value were put on the diverse vegetation that grows in our mountains it would far outweigh the coal that lies within them. We have a bio diversity only second to the Rain Forests and it’s being destroyed. My grandmother told me once when we were in the mountains digging ramps that these mountains are magical. She said, “they have everything you need to survive in them” and I don’t think she was talking about coal. When you strip them of their topsoil and use “spray on” grass to cover the mess you might fool some people but if you take a closer look it just looks like death all over the place. Nothing grows for very long on an MTR site.

MM: I would hope that any person reading this educates themselves as to what is going on. If nothing else know that everything goes downstream and these mountains filter a lot of water for a lot of people and it’s being destroyed. So even if you think that the people in Appalachia are “dumb hillbillies” take a minute to think about what is being sacrificed so you can turn on a light. Take a minute to see what your role is in not only destroying ancient mountains but a culture of people. Take a minute to care.