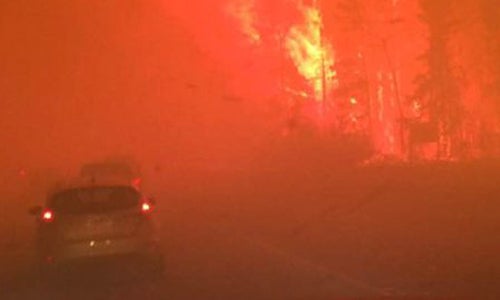 A raging wildfire in a Canadian tar sands town has forced tens of thousands of evacuations and destroyed several residential neighborhoods, offering a bleak vision of a fiery future if the fossil fuel era is not brought to an end. 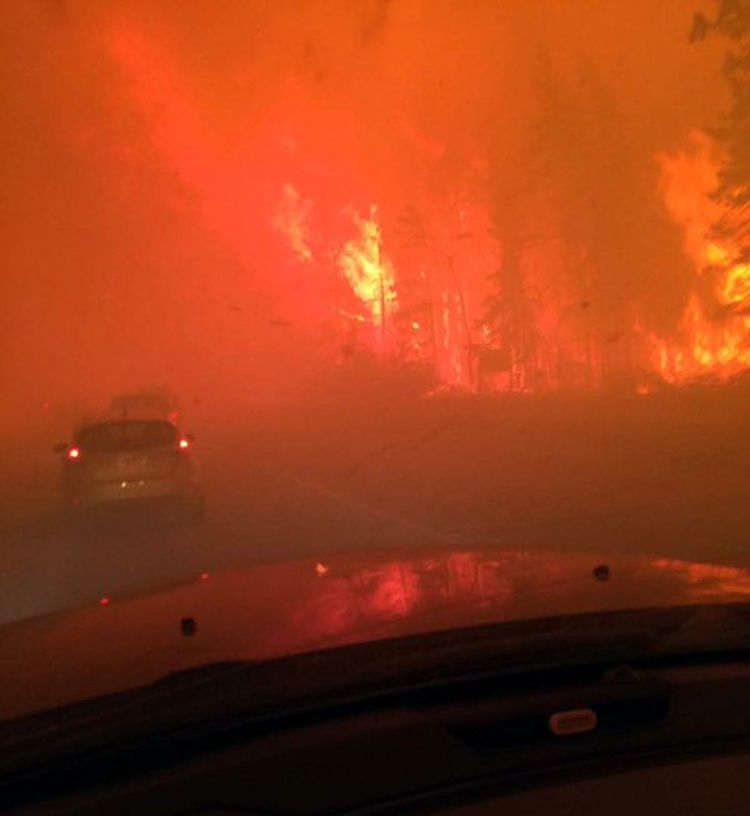 The blaze in Fort McMurray, Alberta, started over the weekend, doubled in size on Monday, and grew into an inferno on Tuesday. It is expected to worsen on Wednesday as strong wind gusts and record high temperatures persist.

“It’s apocalyptic,” John O’Connor, a family physician who has treated patients with health problems in the region related to tar sands pollution, told the National Observer.

“There was smoke everywhere and it was raining ash,” evacuee Shams Rehman said to the Globe and Mail after he and his family reached an evacuation center in the resort town of Lac La Biche, Alberta. “I’ve never seen anything like it.”

Brian Jean, the leader of Alberta’s opposition party and a resident of the city, said much of downtown Fort McMurray was going up in flames: “My home of the last 10 years and the home I had for 15 years before that are both destroyed.”

According to the Edmonton Journal:

Traffic was bumper-to-bumper as people packed families and pets into cars, trucks and campers. Line-ups snaked around gas stations and late in the evening, RCMP were advising they would travel the highway with gas to assist stranded motorists. Wednesday morning, the Alberta government took to social media to say that it would be escorting a fuel tanker along Highway 63 to help people who were still waiting for gas.

No casualties have been reported.

Now a wall of flame along highway 63. #cbc #ymmfire pic.twitter.com/geObPv6wqK

Fire season came early to Western Canada this year; already there have been 311 fires in Alberta, according to the province’s Ministry of Agriculture and Forestry, and approximately 192 fires in British Columbia.

Experts attribute the early onset and extremity of the fires to human-caused climate change, exacerbated by a strong El Niño effect, which led to a drier and warmer winter with lower-than-average snowfall.

“Because spring came about a month early here, we are already in the middle of our prime fire season for the spring,” Mike Flannigan, a wildfire expert at the University of Alberta, told Global News. “Given the already dry conditions means it’s easier for fires, once they sustain themselves, to go underground until it gets windy and they re-appear.”

Furthermore, University of Lethbridge professor Judith Kulig told the publication, “the whole aspect of climate change and global warming…is then interrelated [to] things such as insect infestation, so pine beetle increases because it’s not a cold enough winter. The trees are infested and drier and more prone to fire.”

#ymmfire Us getting out of Beacon Hill! My childhood home and everything I've ever known is burnt to the ground. 🙁 pic.twitter.com/eY1KmCVIvi

The wildfire is the latest in a lengthening lineage of early wildfires in the northern reaches of the globe that are indicative of a changing climate. As the planet continues to warm, these types of fires will likely only become more common and intense as spring snowpack disappears and temperatures warm.

Fort McMurray is home to the Athabasca tar sands, the largest single oil deposit in the world, containing an estimated 174 trillion barrels of bitumen. Tar sands oil production is the fastest growing source of greenhouse gas (GHG) emissions in Canada, and greatly increases the country’s contribution to global warming.