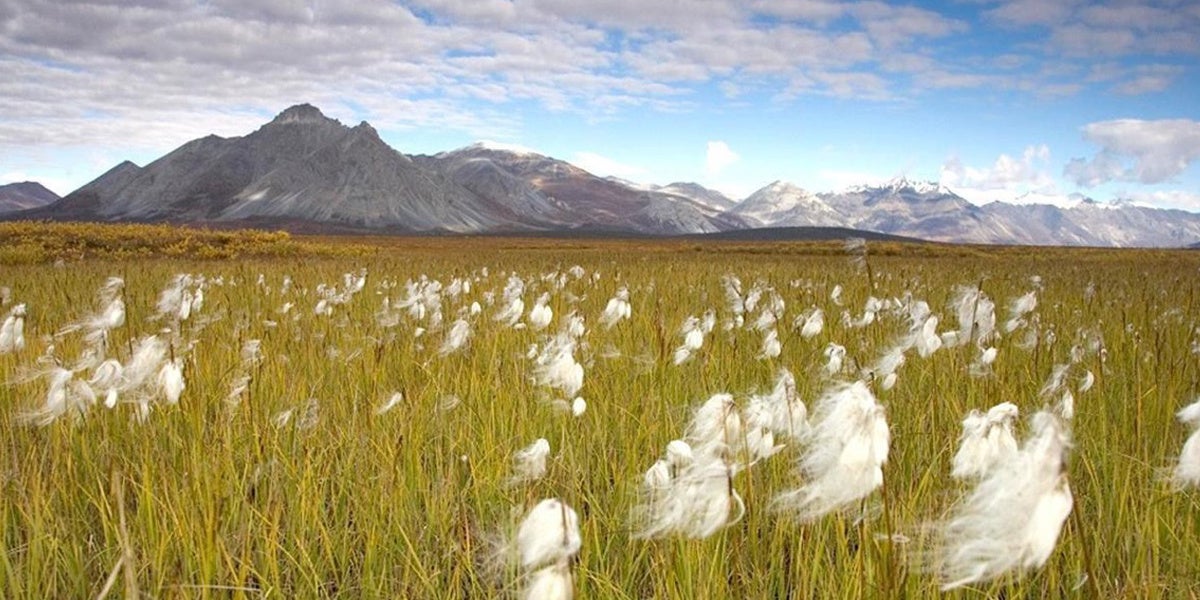 After decades of bitter struggle, the Arctic National Wildlife Refuge (ANWR) seems on the verge of being opened to the oil industry. The consensus tax bill Republicans are trying to pass retains this measure, which was added to gain the key vote of Alaska Sen. Lisa Murkowski.

This bill, however, stands no chance of being the final word. ANWR has been called America’s Serengeti and the last petroleum frontier, terms I’ve seen used over more than a decade studying this area and the politics around it. But even these titles merely hint at the multifold conflict ANWR represents–spanning politics, economics, culture and philosophy.

Differing Views From the Start

Little of this debate, which stretches back decades, makes sense without some background. Let’s begin with wildlife, the core of why the refuge exists.

With 45 species of land and marine mammals and over 200 species of birds from six continents, ANWR is more biodiverse than almost any area in the Arctic. This is especially true of the coastal plain portion, or 1002 Area, the area now being opened up to exploration and drilling. This has the largest number of polar bear dens in Alaska and supports muskoxen, Arctic wolves, foxes, hares and dozens of fish species. It also serves as temporary home for millions of migrating waterfowl and the Porcupine Caribou Herd which has its calving ground there.

All of which merely suggests the unique concentration of life in ANWR and the opportunity it offers to scientific study. One part of the debate is therefore over how drilling might impact this diversity. 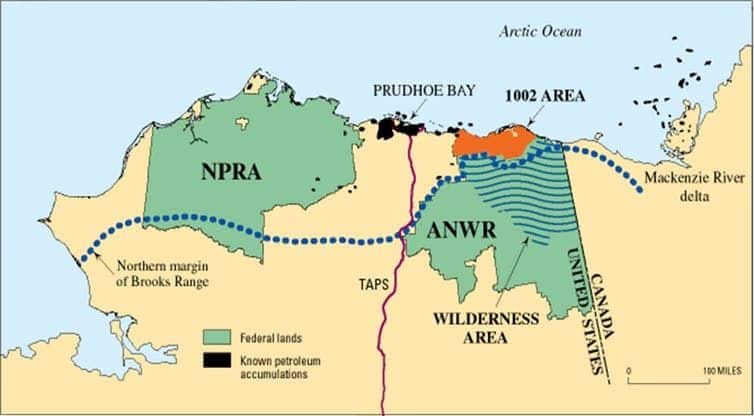 Map of northern Alaska showing locations of the Arctic National Wildlife Refuge, including. the 1002 Area, which is slated to be opened for oil and gas drilling, and the National Petroleum Reserve–Alaska (NPRA). U.S. Geological Survey

At the same time, debate over this area’s mineral resources has existed since even before Alaska’s founding. An effort by the U.S. Fish and Wildlife Service to withdraw part of northeast Alaska from mining (later drilling) was eventually passed by the House in 1960 but then killed in the Senate, on the urging of both Alaska senators. It was resurrected by President Eisenhower through an executive order establishing a wildlife range (not refuge, which requires government protection and study).

ANWR thus began as a battleground over state versus federal control of resources. Change came with the oil crises of the 1970s. After much debate, Congress passed and President Carter signed the Alaska National Interest Lands Conservation Act in 1980, increasing the size of the area to 19.4 million acres and changing it to a “refuge.” ANILCA also mandated an evaluation of wildlife, oil and natural gas resources, and impacts if drilling occurred.

Map shows the 1002 Area, which will be opened up to oil and gas exploration, along with existing drilling sites in the region.U.S. Geological Survey

Such evaluation was delivered to Congress in 1987, with three principal conclusions. First, the 1.5 million-acre 1002 Area, had “outstanding wilderness values.” Second, it also had large hydrocarbon resources, likely tens of billions of barrels. Third, oil development would bring widespread changes in habit, but adequate protection for wildlife was achievable and leasing should proceed.

Made public, these results ignited major opposition from environmental groups. However, low oil prices meant that no companies would be interested in drilling so no action toward leasing was taken. Over the next 20 years, Congress and the president traded blows over drilling, with Republicans passing or proposing legislation in favor and Democrats voting down or vetoing or the relevant bills.

These struggles added support to a larger view: that wilderness is incompatible with any level of development. The stance is often referenced to the 1964 Wilderness Act, a venerable law protecting wildlands but one whose definition of “wilderness” is ambiguous: “an area of undeveloped federal land retaining its primeval character … [that] generally appears to have been affected primarily by the forces of nature, with the imprint of man’s work substantially unnoticeable.” The vagueness here allows for ANILCA’s position that drilling could happen so long as protection of wildlife and reclamation of land occurred. 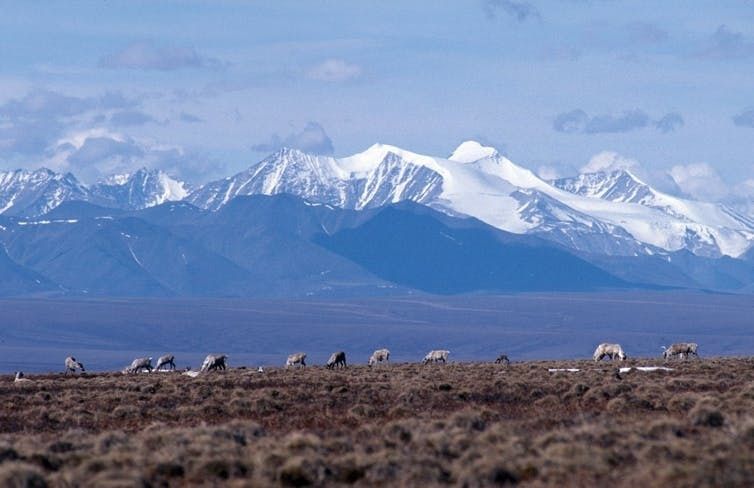 Caribou grazing on the Arctic National Wildlife Refuge. The area is more diverse than any area on the Arctic.U.S. Fish and Wildlife Service

Today, however, no such allowance is accepted by pro-wilderness organizations and the FWS. “You can have the oil. Or you can have this pristine place. You can’t have both. No compromise,” said Robert Mrazek, ex-chair of the Alaska Wilderness League.

Saving ANWR has thus become an effort to save the very idea of wilderness, culturally and philosophically.

The most recent comprehensive assessment of oil and gas in the 1002 Area was by the U.S. Geological Survey (USGS) in 1998. This work shows a mean estimate of 10.4 billion barrels of oil and 35 trillion cubic feet of natural gas, which at today’s prices ($57/bbl oil, $3/kcf) equals a total value of about $600 billion before drilling.

If well costs were $50 a barrel (low for onshore Arctic drilling today but possible with cost reductions spurred by 1002 development), the value after extraction would be $100 billion, from which a federal royalty of 12.5 percent must be subtracted, yielding $87.5 billion–a significant sum. Obviously if well costs are higher, this figure would be lower. Note that Alaska gets 90 percent of that federal royalty and pays a yearly dividend to every state resident–one reason many Alaskans favor drilling and reject the uncompromising wilderness position.

When considering how oil and gas is available, the USGS estimates should be considered low, even minimal. This is because they were made well before the current era of shale oil and gas and tight oil and gas development. New discoveries and use of fracking to the west of ANWR suggest there is more accessible petroleum. How much more? It’s impossible to say, given the many uncertainties.

Though only one well has ever been drilled in the 1002 Area, dozens have been sited in surrounding onshore and offshore areas. These have resulted in a number of limited discoveries and one substantial field, Point Thomson, which is estimated to have recoverable reserves of up to 6 trillion cubic feet of gas and 850 million barrels of oil plus condensate. It began producing in 2016, yet its reservoir is geologically complex, challenging and insufficiently understood, causing difficulties and raising costs.

But Point Thomson’s larger significance could stem from its location: Close to the northwestern margin of 1002, it has brought a pipeline connection to the Trans-Alaska Pipeline right to ANWR’s doorstep.

But Will They Come?

Given the substantial possible reserves and at least some pipeline access, how interested might energy companies actually be in ANWR? The answer for now seems to be: not very. This comes from my own discussions with industry personnel and from the results of a recent lease sale in NPR-A, the National Petroleum Reserve in Alaska to the west of ANWR: Out of 900 tracts offered, only seven received bids (0.008 percent). A Dec. 7, lease sale on state lands did only somewhat better (0.04 percent), with a single company bidding on tracts near the 1002 Area, adjacent to the Point Thomson field, and in the immediate area of two small, undeveloped discoveries (Sourdough and Yukon Gold) made by BP in 1994.

If this be any indication, another multiyear period of high oil prices–in a range, say, more than $80 per barrel–needs to arrive before 1002 looks attractive. Leasing and drilling in an area with extreme weather, little detailed data on the subsurface geology, no discoveries or production, and no existing infrastructure is considered high risk, all the more so in an uncertain price environment like today’s.

My own guess is that the estimated $1.1 billion revenue from an ANWR leasing program has roughly the same probability of coming true as the discovery that climate change is indeed a Chinese hoax. Similarly, we should probably view with a dash of skepticism Sen. Murkowski’s statements that opening ANWR will “create thousands of good jobs … keep energy affordable for families and businesses … reduce the federal deficit and strengthen our national security” by reducing foreign oil. Regardless of what claims are being made now, one can say the measure would undoubtedly deliver on a long-standing promise to Alaskan voters.

Meanwhile, from an environmental perspective, climate change continues to alter and damage the Arctic, even if no development happens. As such, it is hard not to hope that we will never need the oil that lies beneath the refuge.

In the end, whichever way we turn, no stable compromise exists in this conflict. Opening the area to leasing now will not prevent a closing or ban later on. Even native voices are divided on the issue. The Inupiat who live in Kaktovik and depend on sea life for sustenance, would welcome the work that drilling could bring, while the Gwich’in to the south, who rely on the caribou, see development as jeopardizing their culture.

Legal challenges to any level of leasing are certain, including those intended to slow the process until drilling opponents will win later elections, if they can.

The one truth all can agree on is that ANWR has never been a “refuge” in the landscape of American society.