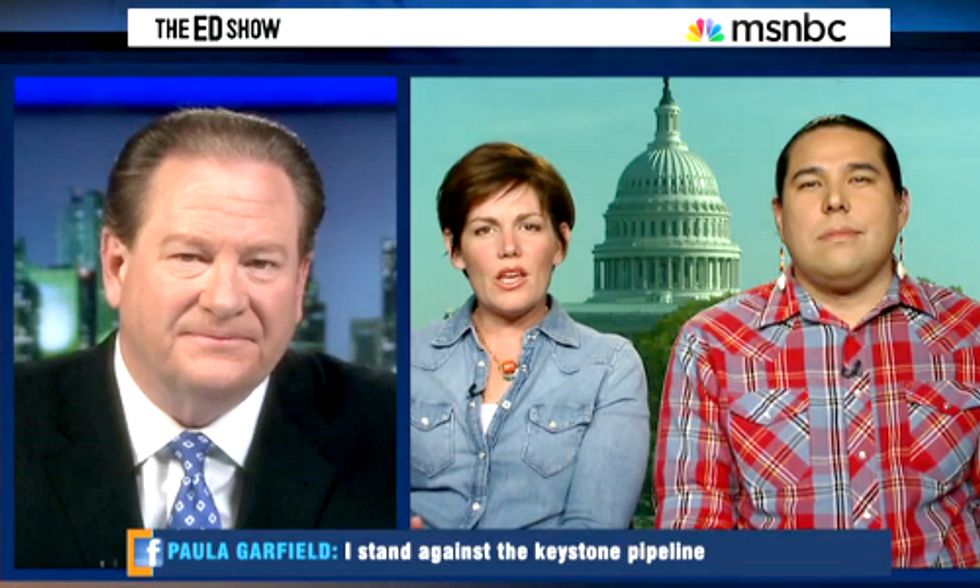 The longer the Keystone XL decision is delayed, the more attention it gets.

The Obama Administration began Easter weekend by announcing that a decision had been postponed indefinitely. The fallout from that announcement trickled into the cable TV talk-show cycle on Monday and Tuesday. Bold Nebraska founder Jane Kleeb took to MSNBC's Reid Report to discuss the Cowboy and Indian Alliance Reject and Protect campaign this week in Washington.

Host Joy Reid asked Kleeb what her specific opposition was to the pipeline. After all, a recent survey from the Pew Research Center found that 61 percent of Americans actually support construction of the 1,179-mile pipeline.

"The more you learn about tar sands and the more you learn about TransCanada, the company that wants to build this pipeline, they are bullies," Kleeb said. "They are forcing landowner to sign contracts that are very one-sided and shift a lot of the liability of oil spills when they happen ... If you're an [agricultural] community like Nebraska, you rely on your land and clean water. So, for us, this isn't about red and blue fights, this is about clean or polluted water."

KXL opposers still have a mountain to climb in changing public perception of the proposed pipeline. Video screenshot: MSNBC

The MSNBC tour continued for Kleeb on The Ed Show. There, she discussed many of the same issues, but was accompanied by Dallas Goldtooth of the Lower Sioux Dakota Nation. He said the delay should be viewed as a "huge victory" and signal that Washington is listening to the concerns of his group and many others who have been fighting against the pipeline for years.