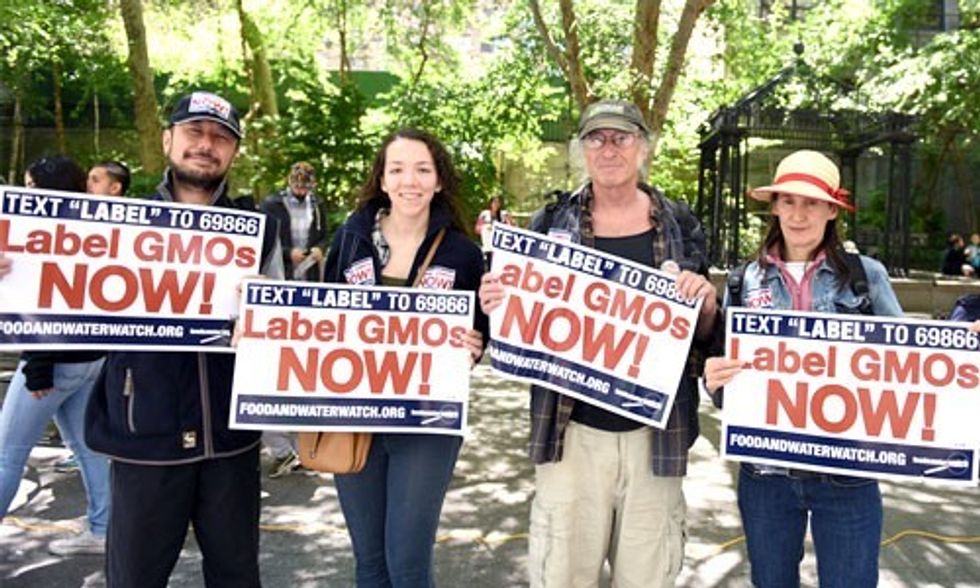 This week the House Agriculture Committee is expected to mark up and vote on a bill that would take away the right of states to label food with genetically modified ingredients, or GMOs. According to Environmental Working Group (EWG), the latest draft of the measure shows it to be a bad bill that keeps getting worse.

The global day against Monsanto in New York City on May 23.
a katz / Shutterstock.com

The bill originally only prevented states from labeling products with GMOs. The version to be considered this week goes a step further, prohibiting state and local governments from protecting the environment and public health from the side effects of the production of GMO crops. The bill also allows companies to make “natural” claims on foods with GMOs and blocks state efforts to prohibit these misleading claims. These are more reasons that clean food advocates call the bill the Deny Americans the Right to Know, or DARK Act.

“This bad bill just keeps getting worse,” said Mary Ellen Kustin, EWG senior policy analyst. “The DARK Act has always been an infringement upon the well-established rights of states to regulate food labeling, but the most recent versions of the bill takes that overreach to a new level.”

Use of herbicides linked to cancer, especially glyphosate, has exploded alongside the increase in production of GMO crops engineered to withstand the application of these toxic chemicals. In the last 20 years, use of glyphosate, which was recently identified as a probable human carcinogen by the world’s leading cancer researchers, has increased 16-fold.

As glyphosate use has increased, weeds have started to develop resistance to it. In response, Dow Agrosciences has produced Enlist Duo, a combination of glyphosate and another herbicide, 2,4-D, which was recently labeled a possible human carcinogen. The U.S. Environmental Protection Agency has approved the use of Enlist Duo in 15 states, though the agency has not examined the safety risk of the two active ingredients when combined together.

“Because of the risks to human health posed by the widespread application of herbicides linked to cancer and other terrible diseases, like Parkinsons, of course local governments would want to keep farmers and farmworkers safe from exposure,” said Kustin. “If the federal government isn’t going to protect public health, responsible local officials will want to step up—but the DARK Act wants to make it impossible for them to do so. Backers of the bill keep adding more ways to keep Americans in the dark.”

How Monsanto Gained Huge Control of the World’s Food Supply