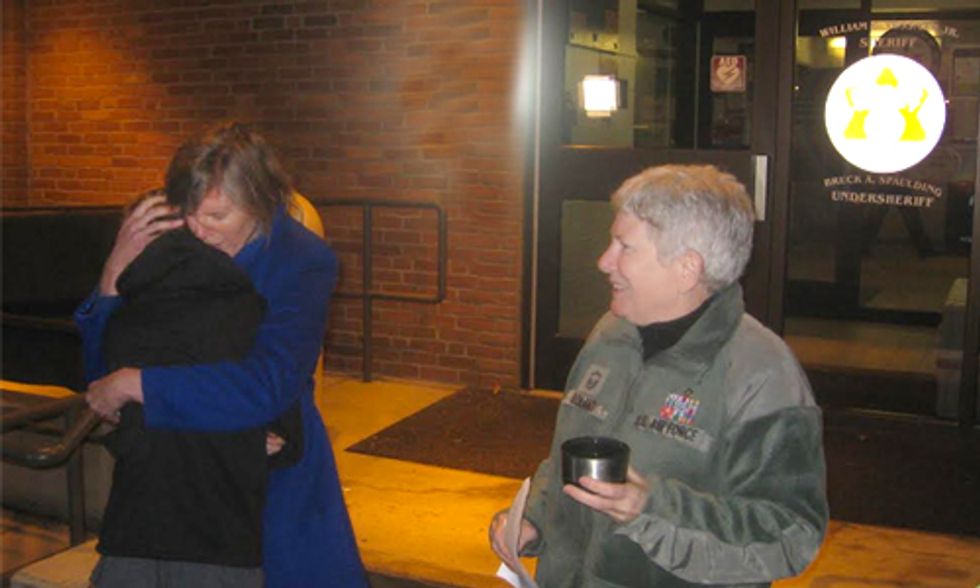 [Editor's note: On Nov. 26 at 12:01 a.m., Sandra Steingraber and Colleen Boland were released from jail after serving eight days of a 15-day sentence for trespassing at the gates of Crestwood Midstream on the banks of Seneca Lake. They were immediately greeted by a crowd of supporters outside the Schuyler County Jail in Watkins Glen. Below are transcripts of their speeches.

Sandra Steingraber and Colleen Boland right after they were released from jail on Nov. 26 at 12:01 a.m., after serving eight days of a 15-day sentence for trespassing at the gates of Crestwood Midstream on the banks of Seneca Lake. Photo credit: Chris Tate

Steingraber and Boland are among the first wave arrests as part of a sustained, ongoing, non-violent civil disobedience campaign against the storage of fracked gas along the shores of Seneca Lake, a source of drinking water for 100,000 people. There have been 73 arrests so far. Calling themselves "We Are Seneca Lake," those risking arrest—and their supporters—wear blue during blockades. Donations to the jail fund are greatly appreciated and make a perfect holiday gift.]

But I’m also glad to have spent this past week in the 24/7 company of my co-defendant and Seneca Lake co-defender, Colleen Boland. Thanks to the kindness of our booking officer, Colleen and I were placed in adjacent cells.

For five days we talked through the wall between us and passed notes back and forth. After our TB tests came back negative, we were reclassified and then could speak to each other face-to-face in the cell block and walk together in circuits together around the rec yard.

Colleen, there is no person I would rather be imprisoned with than you.

One document that we passed back and forth between us was a copy of Martin Luther King’s 1963 “Letter from a Birmingham Jail.” In it, Dr. King makes the case for civil disobedience as a tool of social change when all other lawful efforts to attain justice have failed.

It was interesting for me to learn that the civil disobedience trainings during the Civil Rights Movement included how to cope with “the ordeals of jail."

Likely, for King and his fellow civil rights workers, continuing their civil disobedience witness in jail was not a choice, as it is for us, who landed in jail because we respectfully refused to pay our court fines.

Nevertheless, enduring the ordeals of jail still has value. Among other benefits, a jail sentence offers time for reflection.

Here is one insight I’ve had during my own week of reflection. It comes from a fellow inmate who is struggling mightily to overcome a lifetime of drug addiction and sexual abuse that extends back into her early childhood. Abuse is what’s normal for her. She has never lived without it. So, how to move forward? She told us, “I’m not trying to find myself. I’m trying to CREATE myself.”

I think that’s our challenge, too. We’ve been living so long under the tyranny and abuse of the fossil fuel industry that it’s come to seem normal to us. We have never experienced life without it.

So, when a Texas-based gas company buys our lakeshore in order to store vast quantities of explosive hydrocarbon gas in the old salt mines underneath—imperiling drinking water, the climate and everything in between—we don’t know what to do. All we know is that Big Oil and Gas has always had its ravaging way with us.

We can’t find the path to victory; we have to CREATE it.

That’s going to require a lot of work from all of us over a sustained period of time. What Colleen and I just did is only a tiny part of the struggle. So, please don’t thank us. Tell us what YOU are going to do.

Sandra Steingraber and Colleen Boland in orange jumpsuits and shackles as they were brought to the Schuyler County jail from the Chemung County jail for release.

Thank you all for braving the cold and coming out at such a late hour to welcome Sandra and me home.

As many of you know, a little over a month ago, and with the full support of many of you here tonight, I chose to embrace my military past and take on Crestwood Midstream and the oil and gas establishment. I was arrested for trespassing on October 29.

For this action, I donned pieces of my Air Force uniform, and, I have to say, it has served me well. Recalling the hardships and dehumanization that came with basic training long ago helped me immeasurably to endure the discomforts of a seven–day jail stay.

Drummed into us, over and over again, throughout basic training, was one fundamental principle: leave no one behind. On the obstacle course, before we could move onto the next barrier, we had to stop, look back, and make sure no one was in trouble behind us.

During last few hours in lock-up tonight, I couldn’t help but feel that I was about to leave new comrades behind: my fellow cellmates in cell block C. With the exception of my next-door neighbor in cell number 3 (Sandra Steingraber), I knew that I would soon be leaving behind women who told us they believe in what we are doing and wholeheartedly support us.

And they thanked us.

Due to their circumstances and the heart-wrenching life stories they freely shared with us, I understand they can’t join us on the front lines—now or anytime in the near future—even though they said they gladly would. They’ve got life-saving work to do—on themselves and for their children. So, I give them a pass.

But, as I sat in my locked cell, day after day, I realized I’m growing less patient towards those who are quick to thank and painfully slow to step up. We are in a crisis here—along Seneca, and in Horseheads, and Lowman, and Painted Post, and in other communities throughout the region that are threatened with fracking and fracking infrastructure.

Time is ticking out. Call me cranky at this late hour if you wish, but I believe it’s high time for those who know the perils we face to find a way to contribute.

Not everyone needs to go to jail. But for those Seneca Lake Defenders who are considering trading in their blue garb for orange, I encourage them to do so. It is important to keep the spotlight on what is happening here, and I believe filling the jails with physically able folks will help do that.

A special note to women who are considering accepting a jail sentence in lieu of paying fines: I can say with confidence that Sandra and I have cleared the minefields inside the Chemung County jail. The women inmates there are prepared to welcome you, watch over you and show you the ropes. From their cells, they are prepared to help us in our fight in the only way that is available to them.

The Crappy Mom Manifesto: Letter to Fellow Mothers from the Chemung County Jail