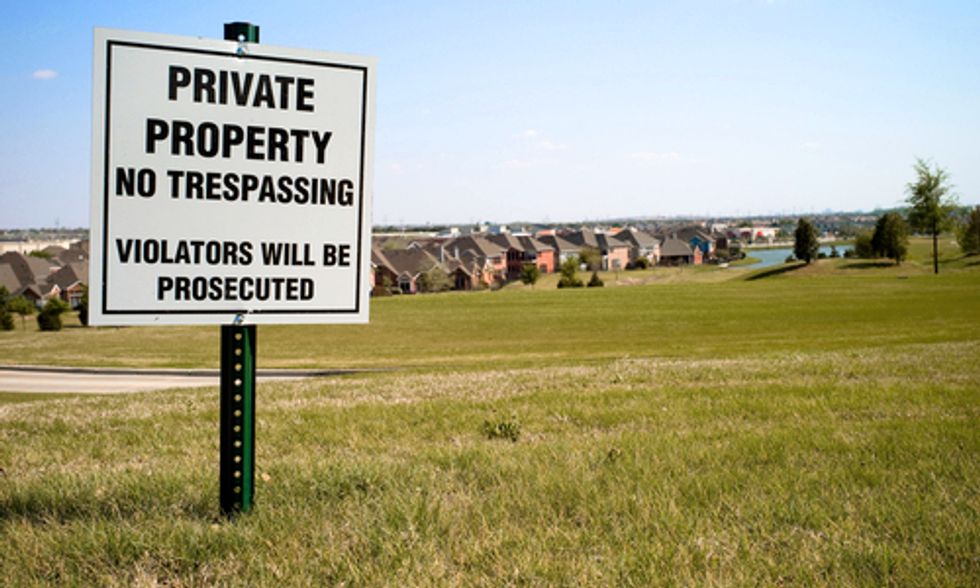 Today the No Toxic Trespass—No Fracking Way tour rolled into Sanford, NC. At a press conference at the Lee County Courthouse, the Blue Ridge Environmental Defense League called upon Gov. McCrory (R-NC) to defend the state’s rural and suburban communities from the fracking industry’s seizure of landowners’ rights.

Homeowners face forced pooling, split estates and seized property at the hands of the fracking industry.
Photo courtesy of Shutterstock

Lou Zeller, executive director of the Blue Ridge Environmental Defense League, spoke about the injustices of forced pooling and split estates, and said, “We know that mineral rights under hundreds of homes in North Carolina have been severed and retained by developers hoping to cash in on hydrofracking.”

Lois Gibbs, executive director of the national Center for Health, Environment and Justice, spoke of the human consequences of fracking she has seen in states which allow the practice: “Fracking will kill the environment. Fracking will poison the water. And fracking will rob you of your right to privacy in your own home.”

Zeller gave examples of homeowners in North Carolina who have already had their mineral rights taken without their knowledge and added, “This may be just the tip of the fracking iceberg.”

Thousands of acres of such property have been identified in Lee County alone. There are housing developments in Moore, Chatham and Harnett counties, the Triangle, the Triad, and the Charlotte-Mecklenburg areas that may have severed properties, which could add thousands of acres more.

In a letter to the Gov. McCrory delivered today, the league requested a meeting with him to determine what his administration is prepared to do to protect residents living in the potential fracking zones of North Carolina, asking: “Will you take action to protect the property rights of citizens of this state?”

“Blue Ridge Environmental Defense League is now working with landowners in the identified shale basins, as well as those in unexplored areas," concluded Zeller. "We help them find out if the mineral rights to their property have been severed. If you want help, give us a call.”

Forced pooling is the practice of compelling private landowners to have oil or gas under their homes and farms extracted and sold to commercial oil or gas production companies. Another practice, known as severed property or split estates, allows developers to keep or obtain mineral rights underneath privately owned land.

Tomorrow the No Toxic Trespass—No Fracking Way tour will be in Pittsboro for a public forum at Central Carolina Community College. The Center for Health, Environment and Justice and the Blue Ridge Environmental Defense League launched the four-day barnstorming tour of cities and towns across North Carolina’s potential fracking zone on Monday.

Spanning the state with a series of local events, the tour features the nationally-recognized mother of the grassroots environmental movement, Lois Gibbs, who organized her community of Love Canal, NY, and triumphed in establishing the Superfund for toxic chemical cleanups.