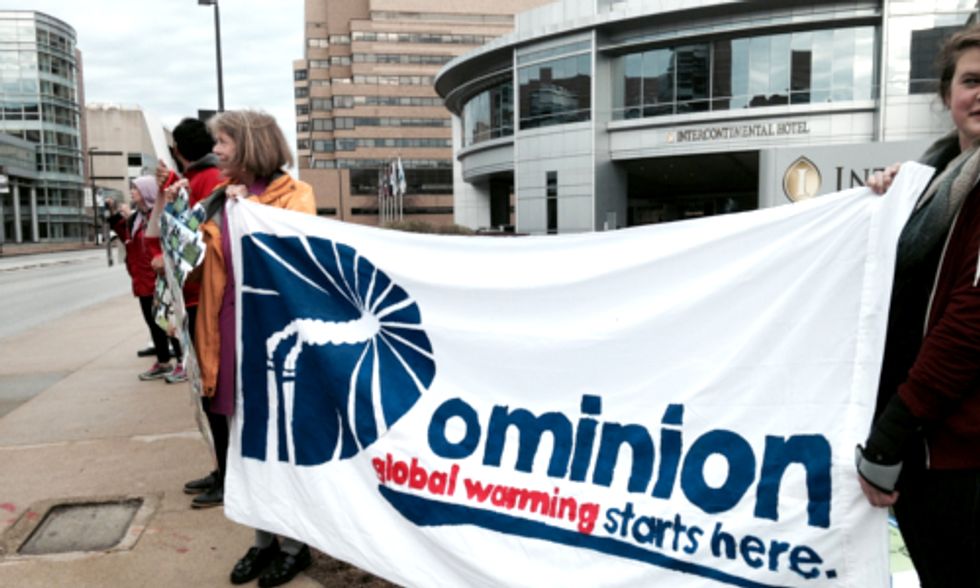 Dominion executives may have been hundreds of miles away from the site of the controversial Cove Point export facility Wednesday, but they couldn't escape the ire of those fighting against the liquefied natural gas (LNG) proposal.

The anti-fracking activists voiced their opinions outside of Dominion's annual shareholders meeting in Cleveland, OH. The Ohio Sierra Club, Ohio Student Environmental Coalition and the Energy Action Coalition organized the protest of the $3.8 million LNG site in Maryland. Activists and shareholders also presented resolutions centered around the company reducing its climate risks.

“Climate change is already impacting Dominion’s bottom line. In fact, the company recently moved to raise electric rates for Virginia customers by over 4 percent due to rising gas prices linked to this winter’s extreme weather,” said Emily Heffling, Virginia field organizer at the Chesapeake Climate Action Network (CCAN) who presented a financial risk resolution. “If Dominion refuses to be part of the solution, the least the company should do is come clean on the costs to shareholders. Many other large U.S. companies are conducting assessments of business risks posed by climate change, and our resolution simply asks Dominion to provide the same transparency.

"Many other large U.S. companies are conducting assessments of business risks posed by climate change, and our resolution simply asks Dominion to provide the same transparency.”

Before the meeting, a Dominion shareholder and the CCAN in filing an official complaint with the U.S. Securities and Exchange Commission regarding the company's failure to adequately disclose significant financial and environmental risks associated with LNG export project. Dominion is seeking SEC approval to raise project funds through a public stock initial offering.

“I have been involved in shareholder advocacy with Dominion since 2008, and I am saddened and frightened by their continued negligence on climate change,” said Ruth McElroy Amundsen, a shareholder from Norfolk, VA. “Dominion is the largest carbon emitter in a state where coastal cities like mine already see regular and costly flooding due to sea level rise. The resolution I presented this year asks Dominion to set a clear goal for reducing its greenhouse gas pollution, as opposed to the nearly 60 percent increase they are projecting over the next two decades.”

There were six resolutions presented by company shareholders, including four by Virginia residents. Here's what they want Dominion officials to do: