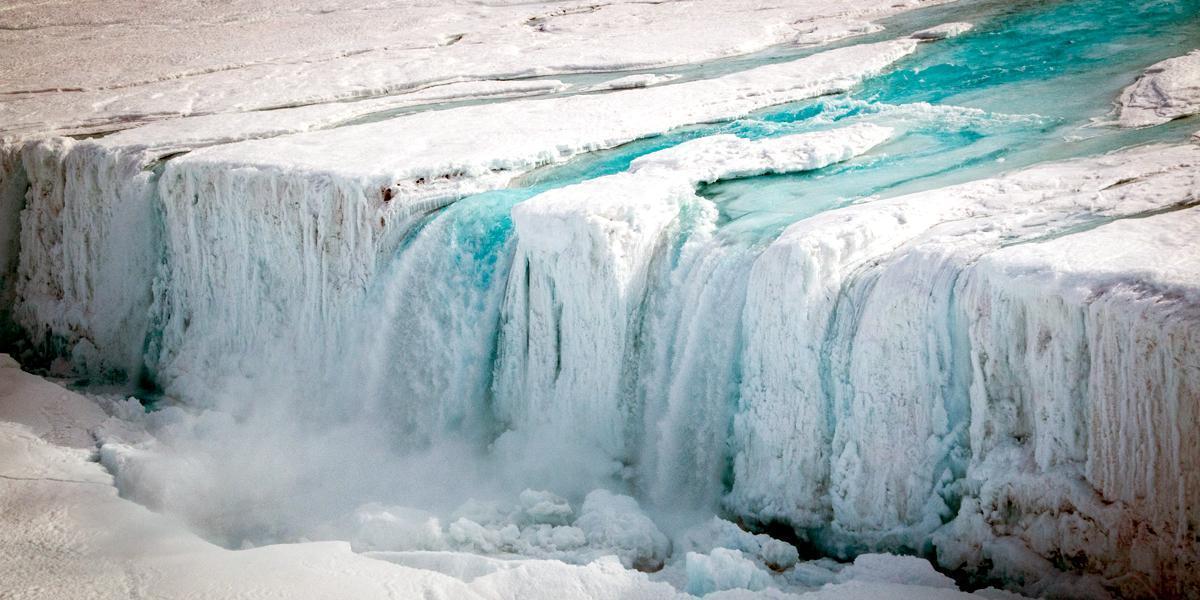 A 130-metre-wide waterfall drains meltwater from the Nansen Ice Shelf into the ocean. Stuart Rankin via Flickr

Scientists poring over military and satellite imagery have mapped the unimaginable: a network of rivers, streams, ponds, lakes and even a waterfall, flowing over the ice shelf of a continent with an annual mean temperature of more than -50C.

In 1909 Ernest Shackleton and his fellow explorers on their way to the magnetic South Pole found that they had to cross and recross flowing streams and lakes on the Nansen Ice Shelf.

Now, U.S. scientists report in the journal Nature that they studied photographs taken by military aircraft from 1947 and satellite images from 1973 to identify almost 700 seasonal networks of ponds, channels and braided streams flowing from all sides of the continent, as close as 600km to the South Pole and at altitudes of 1,300 meters.

And they found that such systems carried water for 120km. A second research team reporting a companion study in the same issue of Nature identified one meltwater system with an ocean outflow that ended in a 130-meter wide waterfall, big enough to drain the entire surface melt in a matter of days.

In a world rapidly warming as humans burn ever more fossil fuels, to add ever more greenhouse gases into the atmosphere, researchers expect to observe an increase in the volume of meltwater on the south polar surface. Researchers have predicted the melt rates could double by 2050. What isn’t clear is whether this will make the shelf ice around the continent—and shelf ice slows the flow of glaciers from the polar hinterland—any less stable.

“This is not in the future—this is widespread now, and has been for decades,” said Jonathan Kingslake, a glaciologist at Columbia University’s Lamont-Doherty Earth Observatory, who led the research.

“I think most polar scientists have considered water moving across the surface of Antarctica to be extremely rare. But we found a lot of it, over very large areas.”

The big question is: has the level of surface melting increased in the last seven decades? The researchers don’t yet have enough information to make a judgment.

“We have no reason to think they have,” Dr Kingslake said. “But without further work, we can’t tell. Now, looking forward, it will be really important to work out how these systems will change in response to warming, and how this will affect the ice sheets.”

Many of the flow systems seem to start in the Antarctic mountains, near outcrops of exposed rock, or in places where fierce winds have scoured snow off the ice beneath. Rocks are dark, the exposed ice is of a blue colour, and during the long days of the Antarctic summer both would absorb more solar energy than white snow or ice. This would be enough to start the melting process.

The Antarctic is already losing ice, as giant floating shelves suddenly fracture and drift north. There is a theory that meltwater could be part of the fissure mechanism, as it seeps deep into the shelves.

But the companion study, led by the polar scientist Robin Bell of the Lamont-Doherty Observatory suggests that drainage on the Nansen Ice Shelf might help to keep the ice intact, perhaps by draining away the meltwater in the dramatic waterfall the scientists had identified.

“It could develop this way in other places, or things could just devolve into giant slush puddles,” she said. “Ice is dynamic, and complex, and we don’t have the data yet.”