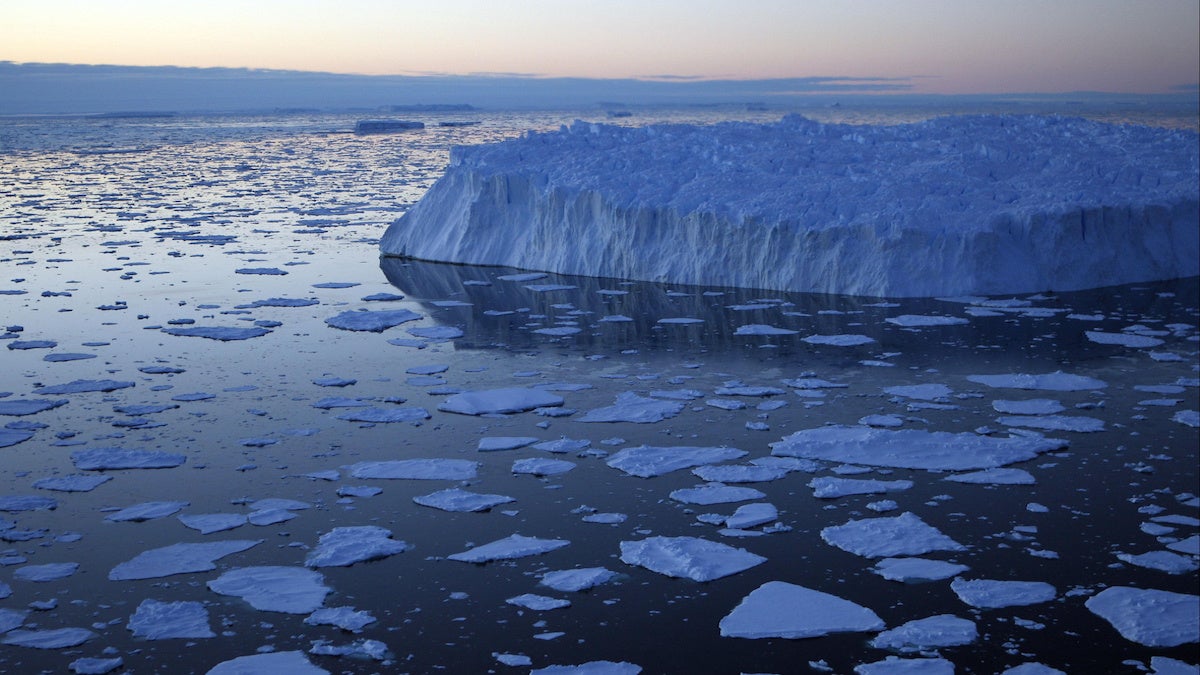 Icebergs and sea ice in the waters off the Australian Antarctic Division on Jan.17, 2008. Fairfax Media via Getty Images

For the first time, microscopic plastic pollution has been found in Antarctic sea ice samples collected more than a decade ago, suggesting that microplastic concentrations in Southern Sea ice may be higher than previously believed.

A total of 96 microplastic particles from 14 different types of polymer were discovered in an ice core sample collected from Casey Station located in East Antarctica in 2009. As ice freezes in the region, scientists believe that small pieces of plastic may become trapped in ice, which acts as a reservoir for pollution until it is released again by ice melt.

“The remoteness of the Southern Ocean has not been enough to protect it from plastic pollution, which is now pervasive across the world’s oceans,” said lead study author Anna Kelly who published her findings in Marine Pollution Bulletin.

Plastic particles measuring less than 5 millimeters have become common in remote marine habitats, from nearly every corner of the world to the bellies of the world’s most remote organisms. Since researchers began tracing microplastics six years ago, they have found plastic pollution in Antarctic surface waters and sediments as well as in Arctic sea ice. Though these regions are remote, concentrations of microplastics have been found to rival those found in more urban settings.

“Forming from seawater, around 80 percent of Antarctic sea ice melts and reforms each year, providing seasonal opportunities for microplastics on the sea surface to become trapped in the ice,” said Kelly, who worked with a team of scientists from the Institute for Marine and Antarctic Studies and the Australian Antarctic Division. Researchers wore a Tyvek suit both when collecting the ice core and when processing it, and a cotton lab coat was worn 11 years later to prevent potential cross-contamination.

An average of nearly 12 particles of microplastic were found in every examined liter of coastal land-fast sea ice, which is sea ice “fastened” to the coastline, according to the Polar Science Center. This number is slightly lower than what previous studies in polar regions have detected, but the overall size of each was larger, which indicate that the pollution came from local sources as it had “less time to break down into smaller fibers than if transported long distances on ocean currents.”

“Local sources could include clothing and equipment used by tourists and researchers, while the fact that we also identified fibers of varnish and plastics commonly used in the fishing industry suggests a maritime source,” Kelly said.

It could be that tourists or scientific researchers visiting the continent contribute microplastic pollution from their clothing fibers and other equipment, especially considering that the ice core sample was collected near a research facility that sees a steady stream of visitors. Microplastics trapped in ice rather than sinking to the deep ocean allows the pollutants to “persist for longer near the surface,” making them more likely to be consumed by small marine organisms like krill who mistake it for food. Additionally, the findings suggest that sea ice could serve as a reservoir for microplastic debris in the Southern Ocean, posing potential biogeochemistry consequences.

“It is worth noting that plastic contamination of West Antarctic sea ice may be even greater than in our ice core from the East, as the Antarctic Peninsula hosts the bulk of the continent’s tourism, research stations and marine traffic,” said Kelly.

The researchers conclude that the findings present a “crucial need for stringent methods” when it comes to both to recovering and measuring microplastic particles from polar regions.