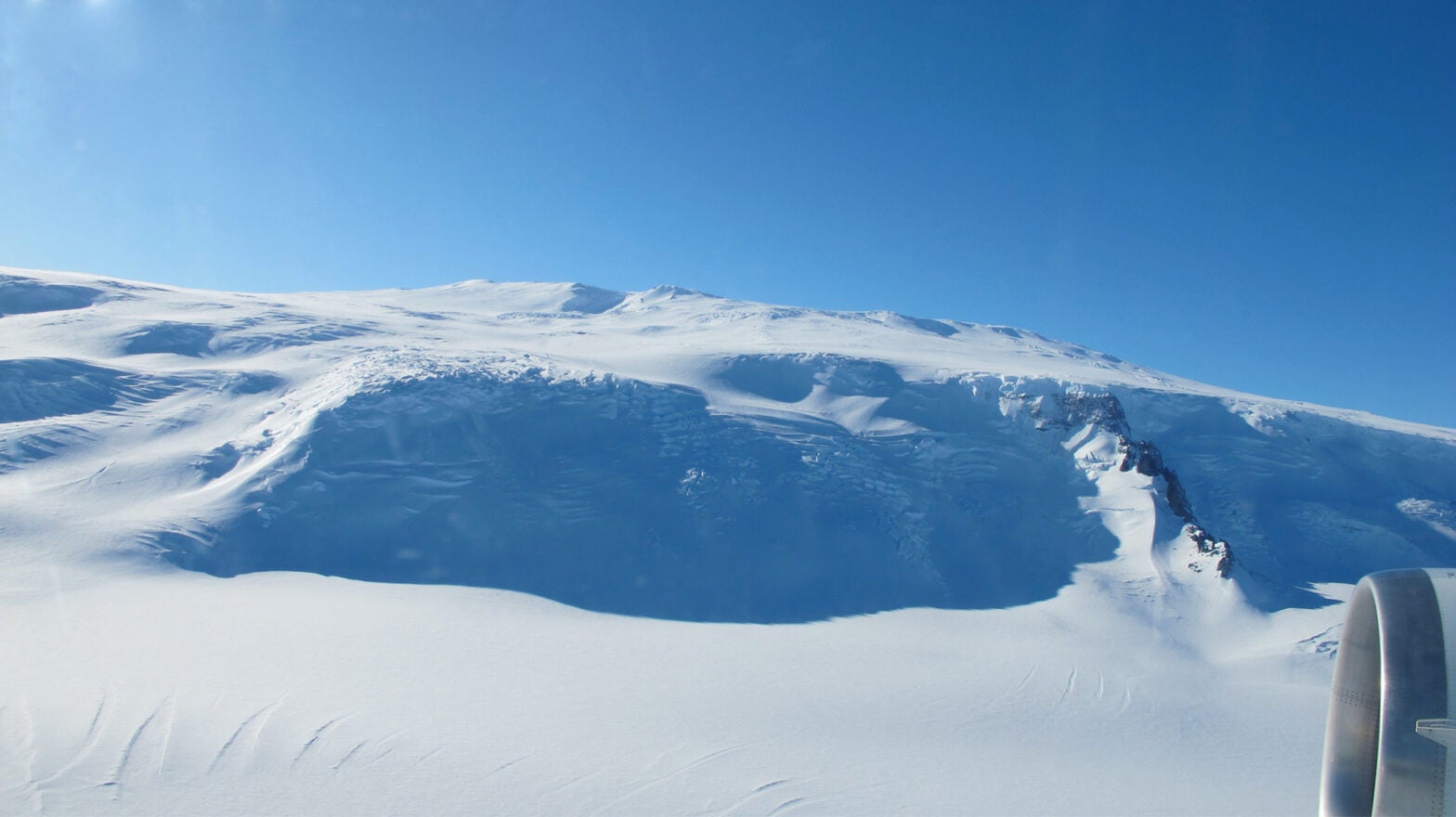 Deep in the last Ice Age, 17,700 years ago, the ancient Antarctic suddenly began to warm. Climate change, unexpectedly, made itself felt in the Southern Hemisphere.

Glaciers in Patagonia and in New Zealand began to retreat. Lakes in the Bolivian Andes began to swell with meltwater. Rain fell in the desert of Australia, and the gusts of dust that normally leave a trace in polar snows began to diminish.

The ocean waters warmed, the sea ice retreated, and the westerly winds that normally circled the southern continent began to veer further south, towards the pole.

And 29 scientists from six nations have worked out why. A series of volcanic eruptions on the Antarctic continent that lasted for almost two centuries began to pump vast quantities of sulphates, and chloride and other halogen gases, high into the air, to create—long before humans were to do the same thing—a huge hole in the stratospheric ozone layer, bringing more intense radiation and rapid warming to a vast area of the frozen south.

The researchers reported in the Proceedings of the National Academy of Sciences that they have identified the geophysical equivalent of a smoking gun: tiny traces of once-massive discharges in ice cores that tell a story of dramatic climate change long before humans had begun to smelt metal, or plough fields.

So while retreat of the Northern Hemisphere ice sheets at that time could be linked to an increase in the sun’s intensity as a consequence of shifts in orbit and planetary axis, other forces were at work far to the south.

The discovery in the mid-1980s of a hole in the protective ozone layer—it blocks ultraviolet radiation but is vulnerable to a class of gases known as chlorofluorocarbons, once used in refrigeration systems—shook the world, and triggered a global ban on such gases. But the evidence from the latest study is that such things have happened before, thanks to volcanic violence.

“We postulate that these halogen-rich eruptions created a stratospheric ozone hole over Antarctica that, analogous to the modern ozone hole, led to large-scale changes in atmospheric circulation and hydroclimate throughout the Southern Hemisphere,” said Joseph McConnell, of the Desert Research Institute in Reno, Nevada, who led the study.

“Although the climate system already was primed for the switch, we argue that these changes initiated the shift from a largely glacial to a largely interglacial climate state. The probability that this was just a coincidence is negligible.”

In effect, the scientists have confirmed something everybody knew anyway: that climate change occurs naturally, and has done so throughout planetary history.

But the study illustrates why basic research is so vital: to be sure that humans are indeed precipitating potentially catastrophic climate change—driven by fossil fuel combustion that spills billions of tons of carbon dioxide and other greenhouse gases into the atmosphere—geophysicists, oceanographers, glaciologists and atmospheric scientists need to identify those other mechanisms that must have been at work to change climate without human help in the past, or might be making contemporary climate change even more certain.

So in addition to understanding the ways in which human impact on the planet translates into shifts in temperature, wind and snow or rainfall, researchers have become increasingly interested in explaining some of the crises of the distant past.

And to do that, they have had to unravel the intricate shifts of wind and water, sunshine and cloud, dust and atmosphere, deserts and ice sheets over many millions of years, to understand what is a natural mechanism for climate change, and why human influence on the climate is of a different scale and kind.

In recent years, they have confirmed the basic orbital machinery that drives Ice Ages and interglacial warm spells. They have established limits to how low planetary temperatures could fall: fortunately, the earth will never become a snowball.

Unfortunately, they have yet to set a limit to how hot the climate could become: in theory, at least, the notorious greenhouse effect linked to fossil fuel combustion could boil the oceans dry and make the planet uninhabitable.

They have used dramatic natural climate shifts in the past to confirm that oxygen levels in the ocean could fall, with dramatic consequences for marine life. They have evidence that ever-greater levels of carbon dioxide can make the seas more acidic, and once again threaten marine life.

They have confirmed that, because of human actions now, temperatures could rise and mammalian body sizes dwindle, because such things have happened in other warm spells.

The pressure is on, not just to measure the impact of humankind on modern climate, but to understand in fine detail all the mechanisms at work that could turn forest into grassland, or grassland into desert, or send the glaciers back uphill, or swell the sea levels and drown low-lying coasts.

So the latest evidence that Mt Takahe in Antarctica erupted repeatedly over a period of 192 years, dramatically changed the climate and sent the ice into retreat, and dumped trace evidence of heavy metals and hydrofluoric acid across 2,800 kilomters (approximately 1740 miles) of sea and ice, as far as South America, is just another piece in the mosaic of fundamental research.

The science behind such studies is testament to the care taken in exhuming the past. Scientists drilled 3,405 meters (approximately 2.11 miles) into the West Antarctic ice sheet to begin making a record of the evidence preserved in ice layers that preserved the annual falls of snow, in the form of 30 different elements and chemical compounds. Some of these existed in concentrations as low as one part in a million billion.

The result is a clearer picture of natural violence in a landscape far from any Stone Age human settlement. It is also a reminder that the Earth remains a dangerous place.

“Imagine the environmental, societal and economic impacts if a series of modern explosive eruptions persisted for four or five generations in the lower latitudes of the Northern Hemisphere where most of us live,” said Michael Sigl, a Swiss scientist who worked at the Desert Research Institute.