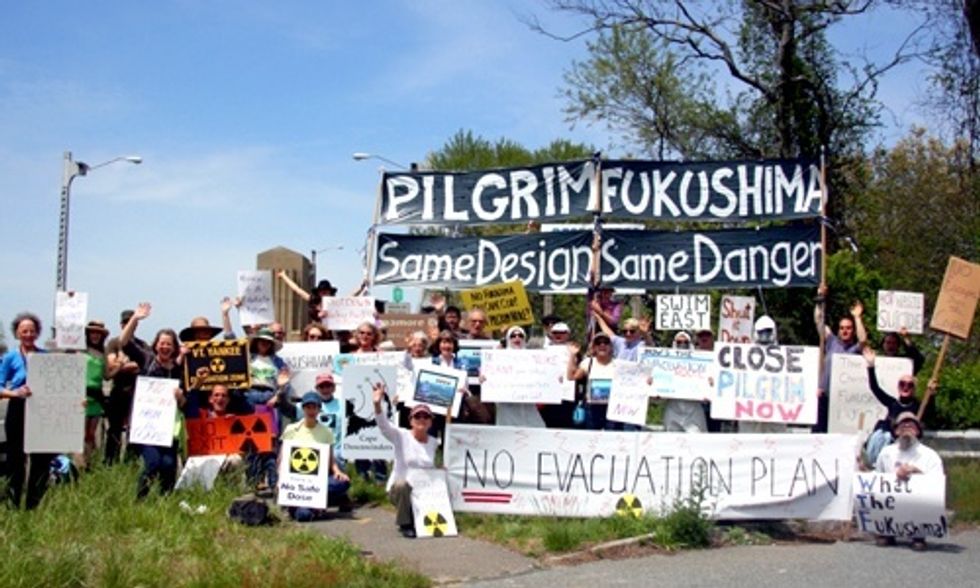 The chain reactor operator Entergy has announced it will close the Pilgrim nuke south of Boston. The shut-down will bring U.S. reactor fleet to 98, though numerous other reactors are likely to face abandonment in the coming months.

But Entergy says it may not take Pilgrim down until June 1, 2019—nearly four years away.

Entergy is also poised to shut the FitzPatrick reactor in New York. It promises an announcement by the end of this month.

CapeDownwinders rally at the Sagamore Bridge, May 13, 2012.

Meanwhile California’s two reactors at Diablo Canyon are surrounded with earthquake faults. They are in violation of state and federal water quality laws and are being propped up by a corrupt Public Utilities Commission under fierce grassroots attack. With a huge renewable boom sweeping the state, Diablo’s days are numbered—and hopefully will shut before the next quake shakes them to rubble.

Meanwhile, like nearly all old American nukes, both Pilgrim and FitzPatrick are losing tons of money. Entergy admits to loss projections of $40 million/year or more at Pilgrim, with parallel numbers expected at FitzPatrick. The company blames falling gas and oil prices for the shortfalls.

Owners of King CONG (Coal, Oil, Nukes and Gas) facilities hate renewables. But in fact the boom in wind, solar, increased efficiency and other Solartopian advances are at the real core of nuke power’s escalating economic melt-down.

The plummeting prices of green power are fast undercutting the economics of America’s aging reactor fleet. They are also chopping into the use of coal and gas, whose costs are rising. Renewables are essentially free at the margin. So green power voids the “baseline” function of both nuke and fossil fuel generators.

The situation at Pilgrim has long been critical. Nearly a quarter-century ago the Nuclear Regulatory Commission (NRC) was forced to advise Pilgrim’s owners (back then it was Boston Edison) that the plant did not meet basic safety standards. The nuke opened in 1972. The commission recently renewed its license for 20 more years.

But its fire protection apparatus has long been illegal. Entergy recently announced it would hire two new employees whose job it would be to watch for fires!

Various estimates confirm Entergy would have to spend tens of millions merely to bring Pilgrim up to basic code. The NRC has labelled it one of the nation’s most dangerous nuke.

So the announcement that it will shut down has been widely welcomed throughout the region, especially by activists who’ve fought 40 years and more to get it down.

But the idea that this ancient, substandard reactor would operate nearly four more years has people shaking. “They want to gamble with the health and safety of the public for these coming years,” says Paul Gunter of Beyond Nuclear. “It’s not right.”

There is unfortunate precedent. At Vermont Yankee, Entergy trashed a decade’s worth of agreements with the state and went to court to stay open despite a host of safety and fiscal violations.

Oyster Creek’s owners cut a deal with the state of New Jersey to operate seven additional years despite being in violation of water quality standards.

Indian Point 2’s lack of a license has been ignored by the NRC. The NRC is expected to do the same when Unit 3’s license expires in December.

It’s presumed that Entergy will want special dispensations for FitzPatrick if it decides to announce a shut-down there.

FirstEnergy wants Ohio to hand it a massive bailout to keep Davis-Besse open despite extremely dangerous safety violations and millions in operating losses. Exelon wants millions in public bailouts from the state of Illinois for five money-losing reactors that are also falling apart.

So Entergy’s decision to shut Pilgrim is welcomed by safe energy activists everywhere as part of the rapid collapse of the atomic power mis-adventure.

But across the U.S. some two dozen Fukushima clones still operate. The entire industry is a decayed, money-losing tombstone for the failed lies about “too cheap to meter.”

So it’s great another shut-down has been announced. But four more years of yet another decayed, increasingly dangerous and hugely unprofitable reactor being kept open is not acceptable.

The no nukes movement will not take it lying down. Stay tuned.