Another State Fights War on Solar and Energy Efficiency 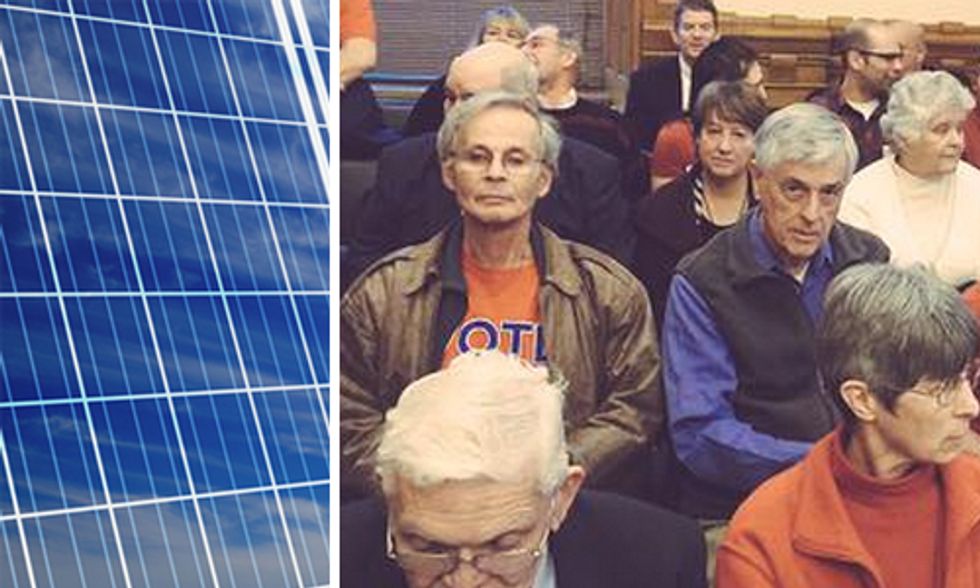 Despite poll after poll showing that Americans want more clean energy, Indiana legislators are pushing bills that would reduce energy efficiency and make it harder for Hoosier state residents to go solar, just as the solar industry is getting on its feet in the state.

Last week, Indiana's Senate Utilities Committee heard from a packed room about its bill that would let utilities set energy efficiency goals. Last year the state decided to end the popular Energizing Indiana efficiency program. Now some in the legislature have created Senate Bill 412, which is very one-sided in favor of utilities who sell electricity and doesn't protect the average person from monopoly interests.

Energy efficiency is a proven tool to lower electricity bills and save money for people across the state. Handing control of these programs over to companies that are in the business of selling more electricity jeopardizes Indiana’s progress on energy efficiency.

And many Indiana residents spoke their mind and delivered that message during the hearing.

"We need state leadership that actually leads, engaging all of the state energy providers, community organizations, businesses, landlords and homeowners in a broad partnership that incentivizes broad-based investment in a more efficient, affordable and broadly-distributed energy future, instead of just pitting the utilities in an adversarial role against the ratepayers," said Rich Van Dyke, of the group NESCO, which represents 32,000 residents on the Indianapolis East Side.

People from many backgrounds spoke out against the utility's plan to control energy efficiency goals, including many from the faith community.

"This bill could be improved if it provided for mechanisms to encourage local governments and non-profit groups to develop energy efficiency programs for the poor in their communities," said Jack Hill, a minister in the Secular Franciscan Order of the Catholic Church in Indiana, in his written testimony submitted to the committee. "More than anyone else, the poor must spend extra money to pay for homes that are poorly insulated and appliances that waste too much energy."

HB 1320 is not fair to current and future owners of rooftop solar and small-scale wind, and threatens to drive up costs for all ratepayers—not just those who own solar—by allowing utilities to increase everyone's fixed monthly charges to feed their bottom line.

Sierra Club Indiana activists were part of the coalition of groups testifying, as Indiana Beyond Coal has long been working getting the state to switch to clean energy and energy efficiency.

"Energy efficiency means lower energy bills and less reliance on expensive power plants, creating savings for all Hoosier families and small businesses," said Jodi Perras, Indiana representative for Sierra Club's Beyond Coal Campaign. "It's time for our elected officials to stand up for the interests and financial security of ordinary Hoosier families by keeping energy efficiency strong and out of the total control of those who sell electricity."

What's more, there's also a bill being proposed that would severely hamper solar's growth in the Hoosier state as well.

Electricity customers in Indiana who use solar power receive credits for selling excess power back to the grid, but HB 1320 would minimize those credits, and allow utilities to set fixed charges for solar users.

Brad Morton, owner of Morton Solar in Evansville, says it would increase the cost to install solar power, effectively killing it as an energy option in Indiana.

Indeed, our Indiana experts say this bill is clearly designed to make residential rooftop solar and small-scale wind more expensive, rig the game in favor of electric utility control and restrict residents’ freedom to generate their own electricity.

HB 1320 is not fair to current and future owners of rooftop solar and small-scale wind, and threatens to drive up costs for all ratepayers—not just those who own solar—by allowing utilities to increase everyone's fixed monthly charges to feed their bottom line.

You can help fight for energy efficiency and clean energy in Indiana—take action today!