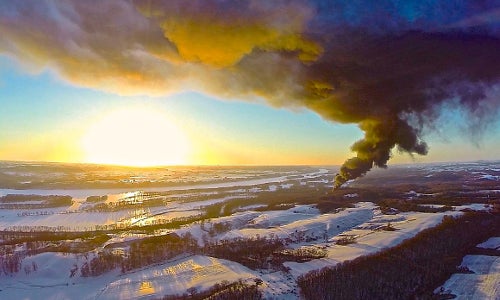 Yet another train carrying volatile crude oil from the Bakken shale formation in North Dakota derailed yesterday, this time in northwestern Illinois near the historic tourist area of Galena overlooking the Mississippi River. It follows recent derailments in West Virginia and Ontario. The area in which it occurred was not as remote as the Ontario derailment. However, it did not require as extensive evacuation as the one in West Virginia in which hundreds were forced from their homes in the bitter cold. According to the Chicago Sun-Times, firefighters were allowing the fireball to burn itself out.

Picture from @scandbq of most recent explosion from the @BNSFRailway derailment fire south of Galena pic.twitter.com/KJWoPb2jow

The 105-car train included 103 cars loaded with the crude oil, with eight derailing. It’s not known yet if any oil spilled into the Mississippi River.

Residents of the Galena area might be especially uneasy about trains rolling through their area. A month ago, a train carrying ethanol derailed in Dubuque, Iowa 15 miles away, with a dozen cars going off the tracks and several landing on the frozen Mississippi River. That fire burned for a day before it went out.

So far this year, these derailments, followed by explosions and fires, have happened only in unpopulated and sparsely populated areas. But their frequency is alarming to more densely populated communities on the rail paths of these trains with many saying it’s only a matter of time until a derailment causes a disaster like the one that killed 47 in Lac-Mégantic, Quebec in July 2013—or worse.

“Rail transport of crude oil has increased 4000% in the past six years,” said Marc Yaggi, executive director at Waterkeeper Alliance. “Many of these trains travel along and over our waterways, putting our communities, first responders and drinking-water sources directly in harm’s way. This latest derailment shows yet again how explosive this practice can be. Urgent action is needed by the federal Department of Transportation to put the brakes on the unsafe transport of crude oil.”

The train that derailed yesterday had passed earlier through the Minneapolis-St. Paul area as well as the Upper Mississippi River National Wildlife Refuge.

In 2008, railroads carried 9,500 carloads of crude oil; in 2013, they carried more than 435,000 carloads. In the first half of 2014, 258,541 carloads were delivered. Rail imports of Canadian crude oil to the U.S. have increased 20 times since 2011. And as carloads skyrocketed so did accidents. As a result, more oil was spilled from railroad cars in 2013 than the entire period from 1975-2012. Bakken crude, with its exceptional volatility, caused some of the most spectacular derailments, including the one in West Virginia. But there’s evidence that Alberta tar sands oil, the cargo involved in the Ontario derailment, could be just as dangerous. 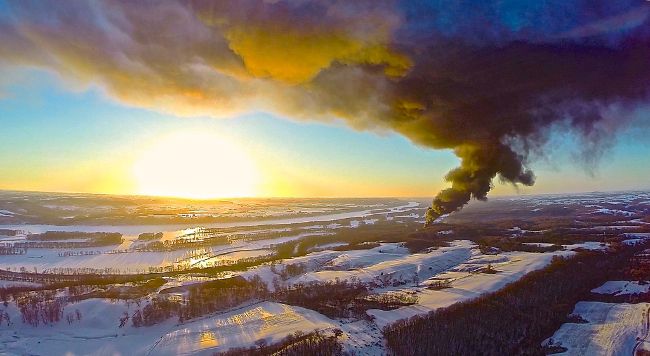 Center for Biological Diversity, which has been tracking the derailments, said more aggressive action is needed to prevent these disasters.

“The only thing more mind-boggling than three such accidents in three weeks is the continued lack of action by the Obama administration to protect us from these dangerous oil trains,” said Center for Biological Diversity senior scientist Mollie Matteson. “The government has the authority to take immediate action to address this crisis which puts homes, waters and wildlife at risk–and yet it has sat back and watched. The fact that these trains are still moving on the rails is a national travesty. The next explosive wreck—and there will be more, so long as nothing changes—may take lives, burn up a town or level a city business district and pollute the drinking water of thousands of people. Enough is enough.”

While the U.S. Department of Transportation has proposed new rules for trains carrying dangerous cargo, they would allow the easily ruptured DOT-111 tankers to remain in use for another two-and-a-half years and the industry continues to lobby for a longer phase-out period. However, the cars that derailed and burned yesterday were the supposedly safer newer CPC-1232 tankers.