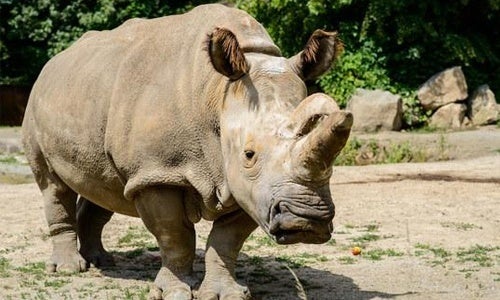 After the deaths of a male Northern White Rhino at the San Diego Zoo last year and now a female, Nabiré, at a Czech Republic zoo Monday, the Northern White Rhinos are truly on the brink of extinction. Nabiré was 31 when she died from complications of a ruptured cyst, according to a statement from the zoo.

“It is a terrible loss. Nabiré was the kindest rhino ever bred in our zoo. It is not just that we were very fond of her. Her death is a symbol of the catastrophic decline of rhinos due to a senseless human greed. Her species is on the very brink of extinction,” said Přemysl Rabas, the director of the zoo.

BREAKING: Death of northern White #rhino Female Nabire yesterday.Only 4 remaining.This may be the end of the species pic.twitter.com/QzyUGaGAd9

Nabiré was one of the only four Northern White Rhinos bred in captivity. The species is now extinct in the wild due to poaching and conflicts in their native home in Africa.

“The four remaining rhinos include Nola, an elderly female living at a zoo in San Diego, and Sudan, an elderly male living with two females—Najin and her daughter Fatu—on the Ol Pejeta reserve in Kenya,” reports The Guardian.

The Czech zoo still hopes to be able to breed the remaining Northern White Rhinos. Nabiré could not conceive naturally due to a large amount of cysts in her utero. But the zoo staff saved Nabiré’s one healthy ovary as “it was hoped she might become a donor of eggs for in vitro fertilization which could result in an artificially made embryo,” says the zoo.

“It is our moral obligation to try to save them,” said Rabas. “We are the only ones, perhaps with San Diego Zoo, who have enough of collected biological material to do so. We are aware that our chances are slim, but the hopes are still alive.”

The prospects for other species of rhinos are not a whole lot better. There are fewer than 5,000 Black Rhinos left in the wild as of the beginning of this year. They are being poached to extinction, losing 96 percent of their population between 1970 to 1992. Like the Northern White Rhinos, conflicts in countries like Sudan, Rwanda and Somalia have only hampered conservation efforts. And the Javan Rhino is only a few years away from where the Northern White Rhinos are today. There are a mere 57 Javan Rhinos remaining in Ujung Kulon National Park in Java, Indonesia, according to the World Wildlife Fund. 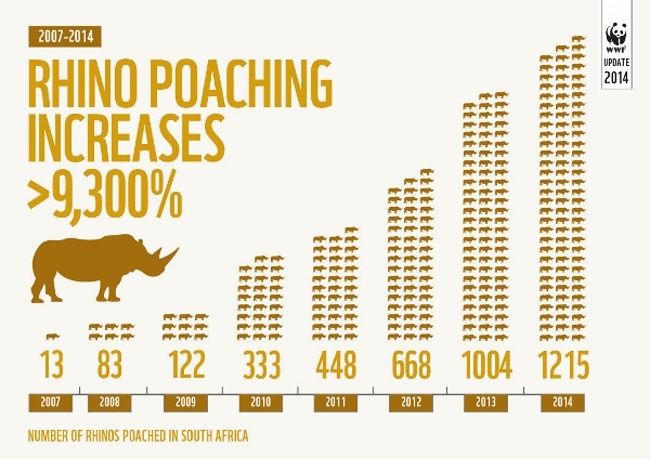 Rhino poaching along with poaching of all animals has skyrocketed in recent years. Figures released earlier this year by the South African Department of Environmental Affairs show that 1, 215 rhinos were illegally killed last year, an increase of 21 percent over the 1,003 killed in 2013, and an overall increase of 9,300 percent since 2007. Most of the illegal activity takes place in Kruger National Park, where 827 rhinos were killed in 2014. To address the wildlife poaching crisis, World Wildlife Fund enlisted actor/director/musician Jared Leto, who’s also a dedicated human and animal rights activist, to draw attention to and hopefully stop the crisis.

In response to the report put out by the South African government, Dr. Morné du Plessis, CEO of World Wildlife Fund South Africa, said: “We … will need everyone to work together to combat these threats if we are to achieve a tangible reduction in rhino losses. There is no time to lose.”