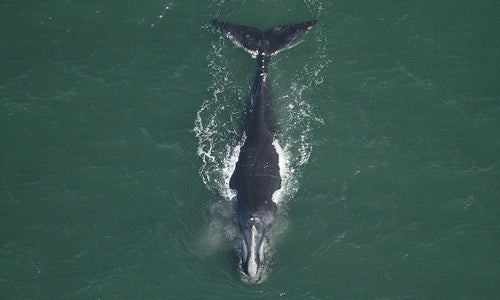 Kill Devil Hills, a small coastal town located in North Carolina’s Outer Banks, has joined the mounting opposition towards seismic airgun blasting along the Atlantic Coast. In early June, the Town of Kill Devil Hills’ Board of Commissioners passed the strongest resolution in opposition to date, which outlined specific economic and ecological consequences of offshore drilling. Kill Devil Hills commissioners have adapted resolutions to oppose offshore drilling for nearly 30 years. 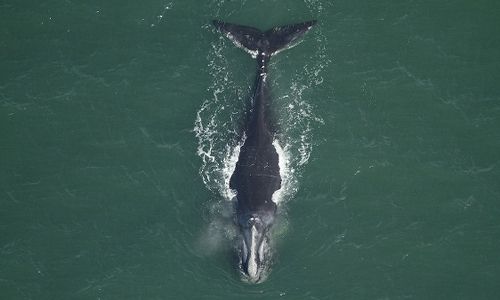 A North Atlantic right whale swims off the Georgia coast, an endangered species that would be affected by seismic airgun testing. Photo credit:

“The 20 counties that comprise North Carolina’s coastal region generate more personal and commercial income, public revenues and employment opportunities, than the petroleum and natural gas industry is estimated to bring into the state,” the resolution said.

The commissioners stated that revenue generated by tourism—totaled at a record $20.2 billion for 2013—far outweighs that of offshore drilling, estimated to be at $118 million annually over the first seven year build-up period. After that initial period, tourism would still generate more revenue than offshore drilling, estimated to then bring in $1.9 billion annually over a 30-year period. The commissioners noted that seismic airgun blasting threatens the very ecosystems—vast, beautiful beaches—that drive the economy in North Carolina coastal counties.

This resolution also mentioned how offshore drilling could result in disastrous oil spills along the North Carolina coast, citing the 1989 Exxon Valdez spill and 2010 BP oil spill disaster as examples. The commissioners also noted that the same beaches that attract tourists are also breeding and foraging grounds for marine mammals, sea turtles and migratory birds, and that North Carolina waters also provide some of the best wild-caught seafood.

“The inherent risks to our region from off-shore oil and natural gas exploration and drilling have the potential to irrevocably harm our natural environment, our economic well-being and our overall quality of life, proven by considering just two massive oil spills in waters contiguous to the U.S.,” the resolution stated.

Kill Devil Hills’ resolution shows that not only is seismic opposition growing, but the resolutions are getting stronger and more specific. Recently, 14 other coastal towns passed resolutions opposing or voicing concern with the use of seismic airguns along the East Coast. An additional 78 local elected officials, 163 conservation and animal welfare organizations, and groups like The Billfish Foundation and The International Game Fish Association have also joined the mounting opposition against their use. The Mid-Atlantic Fishery Management Council, as well as more than 50 members of the U.S. Senate and House of Representatives, have also called on President Obama to stop the use of seismic airguns.

Seismic airguns create one of the loudest manmade sounds in the ocean in order to locate oil and gas deposits on the seafloor, each blast 100,000 times more intense than a jet engine. Impacts to marine mammals include temporary or permanent hearing loss, disruption of vital behaviors and masking of biologically important sounds. According to the Department of the Interior’s own estimates, these dynamite-like blasts could injure and possibly kill more than 138,200 marine mammals, while disrupting the necessary activities of millions more.

Oceana has also delivered more than 100,000 petitions opposing seismic airguns to the director of the Bureau of Ocean Energy Management and continues to campaign against their use. Click here to learn more.

This article was originally published on Oceana’s blog.