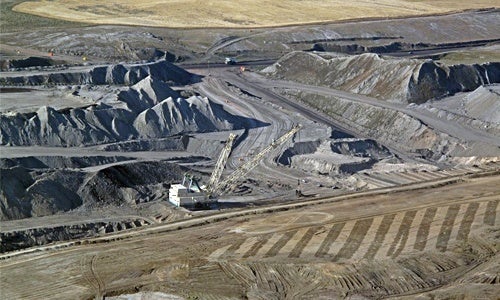 The Obama administration announced today new rules for how the federal government manages and leases coal reserves on public lands. The move adds significant momentum to the growing campaign by climate activists to stop new fossil fuel extraction on public lands and calls to “keep it in the ground.”

“The only safe place for coal in the 21st century is deep underground—these reforms will help keep more of it there,” 350.org co-founder Bill McKibben said. “And they’ll set the precedent that must quickly be applied to oil and gas as well.”

Early reports suggest that the new regulations include a moratorium on new coal leases, or an increase in royalties paid by coal mining companies to the federal government.

“This announcement is another nail in the coffin for the coal industry, and a warning to all fossil fuel companies that the era of unrestrained development is coming to an end,” 350.org policy director Jason Kowalski said. “The fossil fuel industry already has five times more carbon than they can safely burn and keep global warming from running out of control. It’s high time the U.S. government got out of the business of climate destruction.”

Fresh off their victory against the Keystone XL pipeline, over the past few months activists have been organizing protests at government fossil fuel auctions across the country, forcing the Obama Administration to cancel auctions in Utah, Washington, DC, Montana and elsewhere. Activists say the president’s State of the Union address and these new regulations will add momentum to the effort and encourage future protests.

“This new attention to fossil fuels on public lands can’t stop with coal,” said Kowalski. “Over the coming months, the president will come under increasing pressure to stop offshore drilling, get tougher on fracking, and end all new fossil fuel leases on our public lands. How well he keeps fossil fuels in the ground has quickly become the new test for climate leadership.”

The movement has picked up momentum in Congress and on the campaign trail, as well. Last November, Senators Sanders, Merkley, Warren, Boxer, Gillibrand and more backed a new “Keep It In the Ground” bill that would ban new coal, oil and gas development on public lands.

The “keep it in the ground” effort is based in the reality that half the fossil fuels under U.S. soil are on public lands, managed by the current president and their administration. The vast majority of these “public” fossil fuels have not yet been sold to the industry. A report from Ecoshift Consulting showed that ending the policy of selling oil gas and coal to the fossil fuel industry would keep 90 percent of these fossil fuels in the ground, forever—keeping 450 billion tons of carbon dioxide out of the atmosphere.

Used for decades by indigenous communities and environmental justice advocates around the world, the “keep it in the ground” mantra gained steam over the last year as part of a wave of growing campaigns to take on the fossil fuel industry and a growing awareness that the world only has a limited carbon budget it can afford to spend and still keep global warming below 2°C, let alone the 1.5°C that many countries are now calling for. This “climate math” has formed the basis of campaigns like the fight against Keystone XL, which aimed to stop the development of the Canadian tar sands, and the growing fossil fuel divestment campaign.