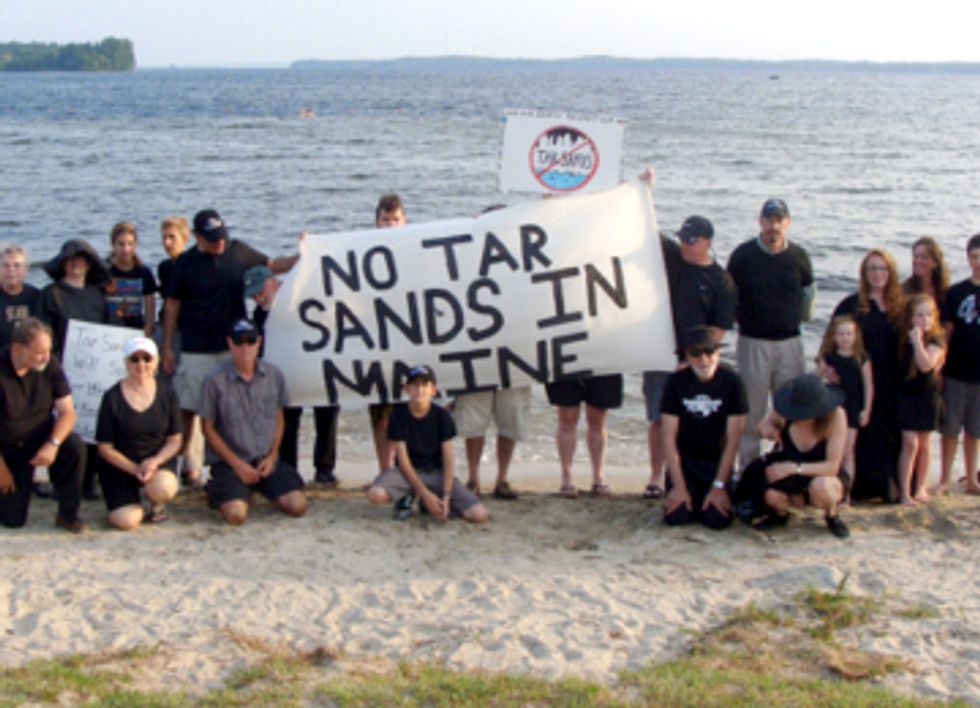 Otisfield residents voted overwhelmingly at a town meeting Saturday to pass a municipal resolution stating opposition to sending tar sands oil through ExxonMobil’s Portland-Montreal Pipeline, making it the seventh Maine town to publicly and officially oppose the proposal. The 63-year-old pipeline, which stretches 236 miles from Montreal to South Portland, is being considered for the transport of tar sands, a form of toxic, thick oil that is associated with higher incidence of pipeline spills and can be nearly impossible to clean up. The pipeline stretches six miles through Otisfield near Pleasant Lake and both Saturday and Moose Ponds.

“This is an important stand for Otisfield to take to ensure the health and viability of our community,” says Moose Pond residents Scott and Zizi Vlaun. “A tar sands oil spill in the Crooked River would be a complete disaster to our environment and tourism-based economy. As organic farmers, much of our customer base comes from visiting tourists, so it would definitely hurt our business.”

The resolution states serious concerns about the environmental and public health hazards of tar sands oil in the context of a town and region heavily dependent on a clean environment for recreation, tourism and the economy at large. Concerns about threats to water quality also motivated the resolution.

“I am pleased so many Otisfield residents took the time to learn the facts about tar sands oil and were not swayed by unsubstantiated industry claims,” says Jeff Stern, chair of the Otisfield Conservation Commission. “Many Otisfield residents attended panel discussions, public presentations and movie showings to learn the facts before today’s vote. Today’s vote makes it clear that Otisfield does not want to run the risk of transporting this heavy toxic oil through our community.”

The resolution calls upon elected leaders to help ensure any tar sands pipeline proposal gets a complete environmental impact review, something that can be required by the U.S. State Department for cross-border pipelines. More than 30 towns along the pipeline have already passed similar resolutions including Raymond, Casco, Waterford, Harrison, Bridgton and Portland.

“As a Canadian citizen and a 30 year resident of Cape Bretton, I’ve seen the emergence of the tar sands extraction rush in Alberta and the devastation it has caused across a widening expanse of the Boreal forest,” says Otisfield resident Pixie Williams. “I’ve also seen the citizen resistance forming in Canada and the U.S. as people learn the facts about tar sands extraction and transportation. Ultimately our children and grandchildren will need to live with this pipeline in their backyards for years to come. We should not put their future at risk by sending toxic tar sands oil through the pipeline.”

“We congratulate the town and citizens of Otisfield on passing this important resolution,” says Todd Martin, outreach coordinator for the Natural Resources Council of Maine. “Once you learn about tar sands and pipelines, it’s not hard to see that it would be a bad deal for Maine."