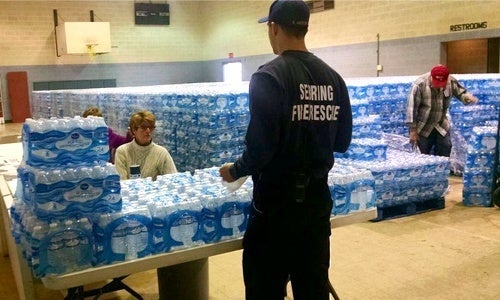 Amid the Flint, Michigan water crisis, experts warned that what’s happening in Flint could happen elsewhere. And now it appears it already has. The town of Sebring, Ohio outside of Youngstown learned Thursday that high levels of lead were detected in some residents’ water last summer.

Residents are now demanding to know why they have been left in the dark for months. According to the AP, schools have been closed for three days, children are being tested for lead poisoning, bottled water is being handed out and state regulators are calling for a criminal investigation of the town’s water plant manager.

Another water poisoning scandal has erupted in the US #Sebringhttps://t.co/HLzb3GkK1W pic.twitter.com/VLPVPbntW9

“How long has this been going on and how much did we drink it?” Sebring resident Nina McIlvain asked. “I’m sure there’s more to it than we know.”

According to AP, last summer, seven of 20 homes where the water is routinely tested showed excessive levels of lead. The Ohio Environmental Protection Agency (EPA) said the manager of the small water system failed to notify the public within the required 60 days and submitted “misleading, inaccurate or false reports.” Plant manager James Bates said the allegations were an “outright lie.”

But Bates does not have the best record. The Ohio EPA accused him in 2009 of “repeatedly violating state rules over the previous several years and operating the plant in a manner that endangered public health,” the AP reported. In those previous violations, he attempted to ignore poor water readings and submitted misleading, inaccurate or false reports.

The Ohio EPA issued an emergency order Monday prohibiting Bates from working at the Sebring village water treatment plant and informing him that the agency intends to revoke his operating license. According to CBS News, the Ohio EPA had been asking Bates for months when he would alert the public.

Village manager Richard Giroux claimed that he did not know about the elevated lead levels until last week, but a letter released by the Ohio EPA showed that Giroux knew since December.

At a town hall meeting on Monday, Sebring residents expressed their frustrations. “A lot of us have kids at home, and we’re extremely afraid, and we need a mayor to stand up, be honest with us, hold people accountable and fix this problem,” one resident told city council at the meeting.

“They need to fix the problem,” resident Tonya Ludt told the AP. “Forget about the finger-pointing and blaming. Fix it.”

Schools have been closed since Friday after tests revealed that two drinking fountains at separate schools contained lead levels that exceeded the EPA standards. School officials said they have shut off the drinking fountains, and classes resumed today.

State regulators believe the water became contaminated after becoming too corrosive, causing lead pipes to leach the heavy metal into residents’ drinking water. Regulators asked the water plant to treat the water to reduce its corrosiveness.

The most recent round of testing at the homes that had elevated lead levels over the summer showed that only one still had detectable levels, Ohio EPA spokeswoman Heidi Griesmer told the AP.

“That tells us what the village is doing to treat the water is starting to work,” she said.

Watch a clip from Fox 8 News Cleveland of the Monday town hall meeting in Sebring: