Another Fully Loaded Coal Vessel Sinks of Coast of Bangladesh 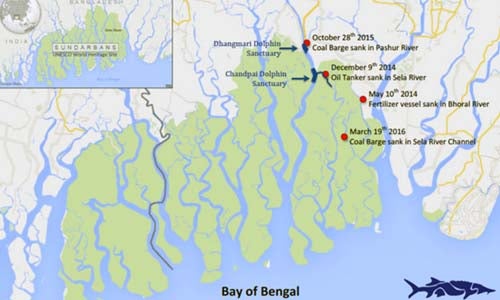 The Sea Horse, a large bulk cargo vessel carrying 1,245 metric tons of coal, sank in the Shela River Saturday inside the Sundarbans in southern Bangladesh. In addition to the large amount of coal, hundreds of gallons of fuel oil, batteries and other toxic contaminants may now be polluting the Shela River.

Waterkeepers Bangladesh in Mongla, Bangladesh Poribesh Andolon (BAPA) and Pashur River Waterkeeper have been on site working with communities to demand immediate measures to protect the Pashur and Shela Rivers and the Sundarbans. 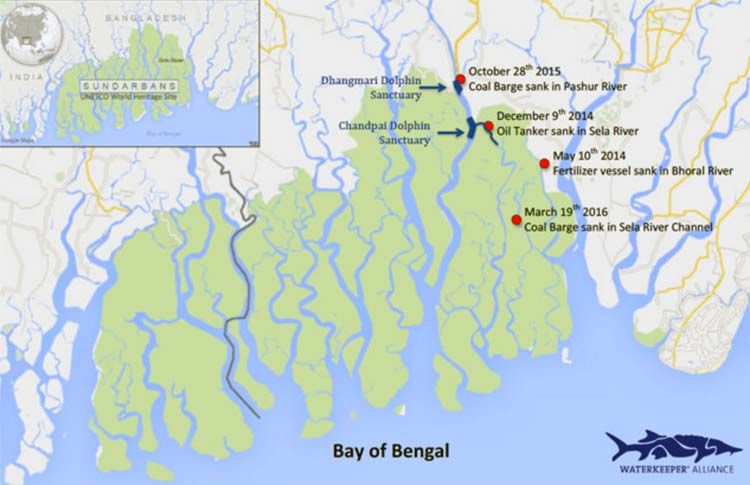 The sinking coal barge marks the fourth incident over the course of two years where there have been devastating impacts to the waters of Bangladesh. Last October, a fully loaded coal barge sank in Passur near the Sundarbans and in May 2015, a vessel filled with 500 tons of toxic fertilizer sank in the Bhola River. And in December 2014, an oil tanker carrying 350,000 liters of furnace oil collided with a cargo vessel and sank in the Shela River, spilling oil into the Dhangmari and Chandpai dolphin sanctuaries created to protect the rare Irawaddy and Ganges dolphins. The oil spread more than 37 miles throughout a network of canals in the Sundarbans, blackening the shoreline and threatening trees and vast populations of fish and dolphins. In each of these instances, government did not adequately protect these precious waterways or regulate shipping business in the waters of the Sundarbans.

The governments of India and Bangladesh are aggressively moving forward with the construction of the proposed Rampal coal-fired power plant which will dramatically increase the shipping of coal, coal ash and gypsum through the Sundarbans. Bangladesh is also moving forward to approve a second coal plant—Orion Khulna—that will be even closer to the Sundarbans than Rampal.

“These recent developments show that the leaders of India and Bangladesh are not taking steps to protect the Sundarbans, rather they are taking multiple joint actions that will result in greater damage and destruction,” Sharif Jamil, Buriganga Riverkeeper, council member of Waterkeeper Alliance and joint secretary of BAPA, said.

“This accident again proves the carelessness of the government towards the protection of the Sundarbans and justifies the call to stop construction of Rampal and Orion Power Plants by the bank of River Pashur.”

A United Nations monitoring mission to Bangladesh began on Monday and will continue through March 28. The monitoring mission is being conducted due to concerns about the potential damage to the Sundarbans as a result of pollution, development and shipping if the proposed Rampal and Orion coal-fired power plants are constructed.

“If the Rampal and Orion coal-fired power plants are built, the resultant dramatic increase in ship traffic will further imperil the Sundarbans.”

Waterkeeper Alliance supports recommendations by the UN, the Bangladesh Parliamentary Standing Committee for the Ministry of Environment and Forest and civil society groups to stop commercial shipping through the Sundarbans in order to protect the site from additional damage and the risk of yet another capsized ship spewing toxicity into one of the world’s most important water dependent world heritage sites.

Waterkeepers Bangladesh and Pashur River Waterkeeper will continue to monitor the situation to assess whether proper clean-up, mitigation and enforcement is completed by the government of Bangladesh.

On Sunday, Waterkeepers Bangladesh took the below video on the Shela river at the site where the Sea Horse sank. In the video you can see many large bulk cargo ships still traveling through the Sundarbans World Heritage site after the ship sank.

Waterkeepers Bangladesh filmed the arrival of government officials as they began investigating the scene of the accident more than 18 hours after it occurred. The video shows that the vessel was fully submerged under the murky waters of the Shela River deep in the eastern part of the Sundarbans. Government officials in the video did not deploy any lighted floating marker buoys to warn other ships away from hidden danger of the sunken ship. They relied on a long wooden stick to probe the water in an attempt to locate it.

No safety, salvage or pollution control teams were dispatched to the capsized ship to prevent additional collisions, begin salvage operations or stop leaks of fuel oil or coal from the sunken ship. The Sea Horse was more that double size of another coal barge that sank in the Sundarbans just six months ago.