Another Developer Pulls Investment From Controversial Pebble Mine Project 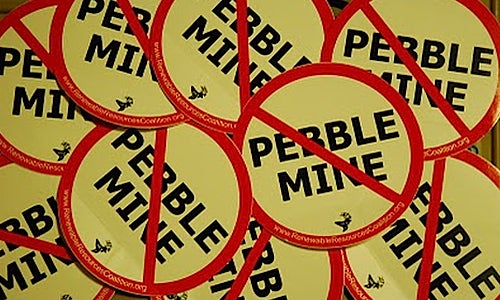 Plans to dig a massive open-pit gold and copper mine in Alaska’s Bristol Bay continue to falter. Yesterday, the latest axe fell when mining goliath Rio Tinto joined other major investors in deciding to withdrawal its 19 percent share from the project. 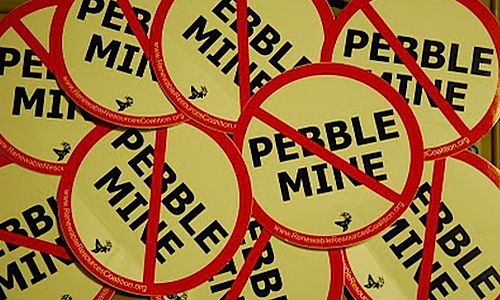 In Sept. 2013, Anglo American announced it was withdrawing from the project, leaving Rio Tinto and Northern Dynasty Minerals as the two sole investors.

If built (which looks increasing less likely—yay!), Pebble Mine would span 186 square miles—the size of 90,000 football fields—and threaten the most productive salmon fishery on the planet, along with the native groups and fishermen who depend on it. Ongoing efforts by locals and conservationists to highlight the potential damage have led to a number of setbacks for the would-be developers, including:

Rio Tinto’s move is yet another sign “that the risks of the project are too great and the opposition of the region’s residents too strong,” said Joel Reynolds, western director of Natural Resources Defense Council (which publishes OnEarth).

Rio Tinto will donate its shares in Northern Dynasty Minerals—the Canadian company developing the mine on its own after Anglo American’s pullout—to two charities: the Alaska Community Foundation and Bristol Bay Native Corporation Education Foundation. “We are ensuring that Alaskans will have a say in Pebble’s future development,” said Jean-Sebastien Jacques, a Rio Tinto Copper chief executive, in a statement.

Northern Dynasty CEO Ronald Thiessen said in January that the company still plans to submit a proposal to the Army Corps of Engineers, the agency that would issue a “discharge permit” allowing the project to move forward. (The Corps can’t issue a permit, however, until the EPA review is complete.) Jacques also says Rio Tinto continues to see Alaska “as an attractive location for potential future investment.”

Does he mean Bristol Bay? Not necessarily, but there’s nothing to stop the company from proposing other mines there—except for local opposition, the EPA and concerned conservationists. And they appear to be on a roll…

100+ Jewelers Say ‘No’ to Dirty Gold for Valentine’s Day