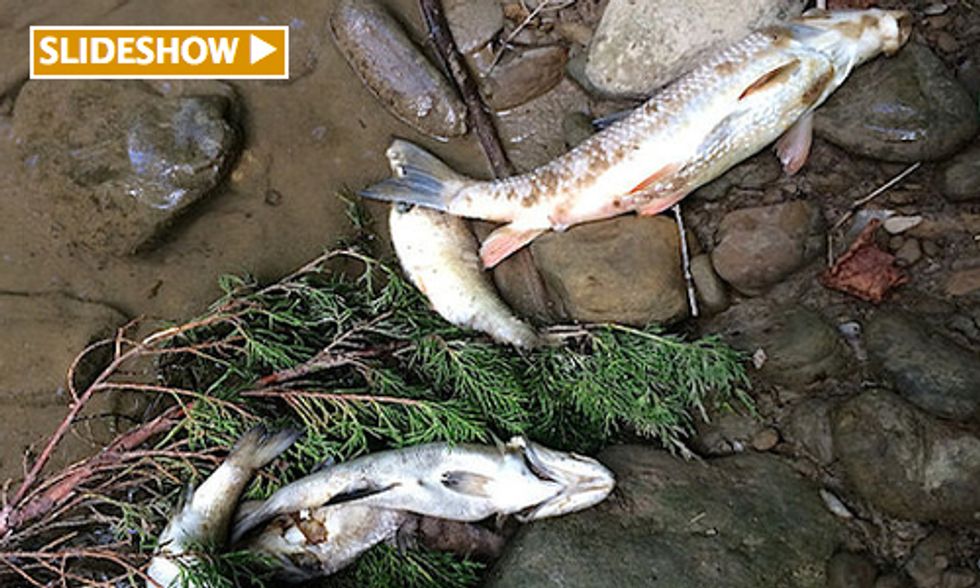 On Friday, May 30, another coal-related chemical spill polluted a public waterway in Central Appalachia, killing hundreds of fish and alarming local residents.

The chemical spill happened at a Cumberland Coal Company prep plant in Harlan County, KY. This time, the spill was not of coal slurry or a coal-washing chemical, but of a flocculant—a type of compound usually used to control other substances in sediment ponds or clean up spilled material in creeks.

Reminiscent of the slurry spill from the Patriot prep plant in February, the spill began when a pipe carrying slurry between the prep plant and an impoundment failed. This time, however, the slurry was contained by the facility’s sediment ponds. Due to concerns about the slurry entering the river, a flocculent called Praestol A6291 was used to help settle the spilled material and prevent it from leaving the pond.

Unfortunately, too much of the chemical was used, causing it to spill into Kelly’s Branch, a tributary of the Clover Fork River. This particular flocculant is toxic to aquatic life and it killed hundreds of fish and other wildlife in the Clover Fork in the days following the spill.

The Harlan County Emergency Management was notified first, but the state Division of Mine Reclamation and Enforcement (DMRE) was not notified until the next day. When DMRE arrived, there was no evidence that any coal slurry spilled into the creek and water samples taken at that time complied with applicable mining laws. Unfortunately, it does not seem that water samples were taken on the day the spill occurred.

A Kentucky Fish and Wildlife employee told a local reporter that the chemical spilled was not harmful to humans. However, the material data safety sheet lists two components of this particular Praestol that are known carcinogens in laboratory animals: diethanolamine and coco diethanolamide. Though this spill was not near a drinking water intake, local residents still expressed a great level of concern about both their own safety and the loss of local wildlife.

Cumberland Coal Company has already been cited for a violation of general hydrologic compliance. Although fines cannot erase the damage done to a community and an ecosystem, hopefully further investigation will result in sufficient fines to compel Cumberland and other companies to prevent future spills. They have been, and remain, far too commonplace.