Annual Beach Report: Is Your Beach Safe for Swimming? 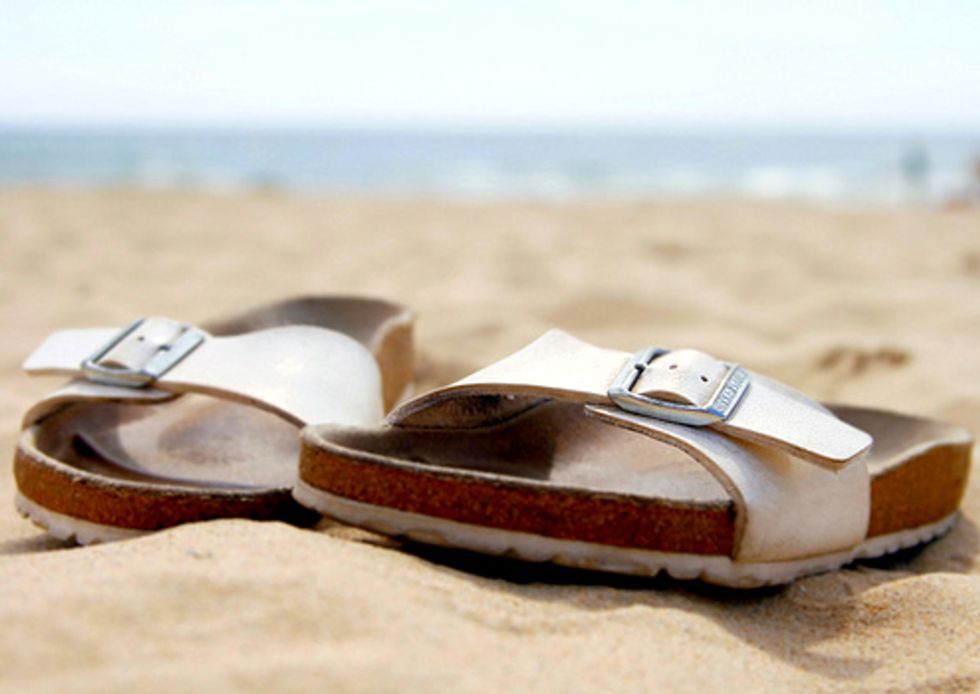 [Editor's note: Be sure to check out Waterkeeper Alliance's new Swim Guide, an app for iPhone, iPad, iPod touch and Android that makes it easy to explore and enjoy the best beaches in the following areas—Alabama, Alberta, British Columbia, California, Charleston SC, Florida, the Great Lakes, the Ottawa River region, and parts of Oregon and Washington State.]

America’s beaches saw the third-highest number of closing and advisory days in more than two decades last year, with 5,945 closing and advisory days in California—25 percent of the national total—confirming California beaches continue to suffer from stormwater runoff and sewage pollution that can make people sick and harm coastal economies, according to the 22nd annual beachwater quality report released today by the Natural Resources Defense Council (NRDC).

“Our beaches are plagued by a sobering legacy of water pollution,” said NRDC attorney Noah Garrison. “Luckily, much of this filth is preventable and we can turn the tide against water pollution. By establishing better beachwater quality standards and putting untapped 21st century solutions in place—we can make a day at the beach as carefree as it should be, and safeguard California’s vital tourism industry.”

In its 22nd year, NRDC’s annual report—Testing the Waters: A Guide to Water Quality at Vacation Beaches—analyzes government data on beachwater testing results from 2011 at more than 3,000 beach testing locations nationwide. The report examines the pollution realities that loom at America’s beaches and calls for a timely, concerted effort to avert future beachwater pollution.

In California, there were 5,945 closing and advisory days statewide last year, a one percent increase from the previous year (5,756 days). Nationally, California ranked 21st in Beachwater Quality (out of 30 states). Nine percent of samples exceeded national standards for designated beach areas in 2011. Consistent with past years, the most common reported cause of contamination came from elevated bacteria levels (94 percent), preemptive closures (i.e., without waiting for monitoring results) due to known sewage spills/leaks (4 percent), and preemptive closures due to heavy rainfall (2 percent).

The report confirms that last year, our nation’s beachwater continued to suffer from serious contamination and pollutants by human and animal waste. As a result, America’s beaches issued the third-highest number of closings or advisories in the report’s history last year, with the second-highest number occurring just the year before.

The report provides a 5-star rating guide to 200 of the nation’s popular beaches, evaluating them for water quality and best practices for testing and public notification. This year, the report awards a dozen beaches with a 5-star rating, as well as highlights the top 15 “Repeat Offenders,” which repeatedly exhibit chronically high bacteria counts.

Additionally, the following beaches in the region were included on the nationwide Repeat Offender list, indicating persistent contamination problems over the last five years:

For the first time this year, NRDC’s report includes a zip code searchable map of more than 3,000 beaches nationwide, making it easier than ever for users to check the water quality, monitoring, closing and swimming advisory information at their local beaches. Find it by clicking here.

This year, Testing the Waters identifies two critical actions that the U.S. Environmental Protection Agency (EPA) can take to better protect people at the beach. First, EPA should reconsider its proposed recommended standards for beachwater quality, which leave beachgoers inadequately protected and unnecessarily exposed to dangerous pathogens in the water. Second, because polluted runoff is the biggest known source of pollution that causes swimming advisories or beach closings, EPA must reform and rigorously enforce the national requirements that govern sources of polluted stormwater to ensure that runoff is controlled using innovative green infrastructure solutions.

California has more than 400 beaches along more than 500 miles of coastline on the Pacific Ocean and San Francisco Bay. In 2011 and continuing into 2012, the California Department of Health Services administered the BEACH Act grant. Starting in October 2012, the California State Water Resources Control Board will provide funding for the state contribution to the state’s beach monitoring program and will administer the BEACH Act grant.

Closing and advisory days in 2011 at America’s beaches reached the third-highest level in the 22 years since NRDC began compiling this report at 23,481 days. This was a 3 percent decrease from 2010; that year marked the second-highest number of closings and advisories.

More than two-thirds of the closings and advisories in 2011 were issued because testing revealed indicator bacteria levels in the water violated public health standards, potentially indicating the presence of human or animal waste. Stormwater runoff was the primary known source of known pollution nationwide, consistent with past years, indicating a lack of needed progress on the problem at the national level. Sewage overflows were also a contributor.

This year’s report found that water quality at America’s beaches remained largely stable, with 8 percent of beachwater samples nationwide violating public health standards in 2011, compared to 8 percent the previous year and 7 percent for the four years prior.

The Great Lakes region had the highest violation rate of beachwater standards—11 percent of samples in 2011. The Delmarva had the lowest rate of samples—4 percent violated standards. In between were Western states (8 percent), New England (7 percent), New York-New Jersey coast (7 percent) and the Gulf Coast (6 percent).

Under the federal Beaches Environmental Assessment and Coastal Health (BEACH) Act, states regularly test their beachwater for bacteria found in human and animal waste. These bacteria often indicate the presence of pathogens. When beach managers determine that water contamination violated health standards—or in some cases when a state suspects levels would violate standards, such as after heavy rain—they notify the public through beach closures or advisories.

For several years, NRDC has issued star ratings to each of the 200 popular beaches around the country, based on indicators of beachwater quality, monitoring frequency, and public notification of contamination. There were twelve beaches last year that received the 5-star rating:

The star system awards up to five stars to each select popular beach for exceptionally low violation rates and strong testing and safety practices. The criteria include: testing more than once a week, notifying the public promptly when tests reveal bacteria levels violating health standards, and posting closings and advisories both online and at the beach.

Over the last five years of this report, sections of 15 U.S. beaches have stood out as having persistent contamination problems, with water samples violating public health standards more than 25 percent of the time for each year from 2007 to 2011:

EPA RECREATIONAL WATER QUALITY CRITERIA ALLOW 1-IN-28 TO GET SICK:

EPA is responsible for ensuring that recreational waters are safe for swimming. One way of doing so is by establishing and implementing comprehensive federal standards that are protective of public health. These standards, called “recreational water quality criteria,” have not been updated since 1986. And in 2000, the BEACH Act required that EPA modernize standards to better protect beach users from illnesses caused by pathogens, such as viruses and bacteria, in polluted waterways.

The draft criteria that EPA responded with (and is proposing to finalize by October 15) miss a critical opportunity to better protect beachgoers from the dangers of swimming in polluted waters. In fact, EPA recommended bacteria levels as “safe” in recreational waters even though the agency estimated they would permit 1 in 28 swimmers to become ill with gastrointestinal sicknesses such as diarrhea, nausea and vomiting. Additionally, EPA does not adequately consider the risks of other health effects, such as rashes and ear, eye, and sinus infections, all of which are commonly experienced by beachgoers.

In order to address these flaws, EPA should revise the level of acceptable risk when it finalizes its new standards this fall, so that they are more protective of public health, including safeguarding against other, non-gastrointestinal illnesses, like rash and ear infections. EPA should also utilize the best available science and improved testing methods when developing the final criteria.

“Clean beaches are vital to our local, regional and national coastal economies,” said Steve Fleischli, Acting Director of the Water Program at NRDC. “This summer provides a crucial turning point and chance to urge EPA to put people first and strengthen water quality standards. If we want to keep our oceans and tourism industries thriving and healthy, we need our local and federal leaders to step up and adopt smart policies that protect our water, our health, and our beach businesses.”

Top governmental leaders, environmental and science agencies, and more than 10,000 Americans have already submitted public comments to EPA, expressing concern that this proposal, if approved without addressing such flaws, will allow an unacceptably high risk of illness.

EPA estimates that more than 10 trillion gallons of untreated stormwater make their way into our surface waters each year, and there are hundreds of billions of gallons of wastewater, which includes sewage and stormwater, released in combined sewer overflows annually.

The best way to keep this pollution out of America’s beachwater is to prevent it from the start by investing in smarter, greener infrastructure on land, like porous pavement, green roofs, parks, roadside plantings and rain barrels. Green infrastructure addresses stormwater pollution by stopping rain where it falls, preventing the rain from carrying runoff from dirty streets to our beaches, and instead storing it or letting it filter back into the ground naturally.

Green infrastructure solutions reduce the need for end-of-line stormwater treatment, prevent overloaded sewage systems and triggered overflows, and thereby turn rainwater from a huge pollution liability into a plentiful, local water supply resource. These sustainable water practices on land not only restore the health of local waterways and beaches, they also beautify neighborhoods, cool and cleanse the air, reduce asthma and heat-related illnesses, save on heating and cooling energy costs, boost economies and support American jobs.

Cities nationwide are already embracing these innovative stormwater management solutions. Now, our federal government has significant opportunities to clean up water at America’s beaches by incentivizing green infrastructure in communities nationwide. EPA has a once-in-a-generation opportunity to expand the robust deployment of green infrastructure by reforming its national requirements designed to tackle urban runoff. A proposed water pollution rule for stormwater sources, such as new and existing development projects, is expected to be announced by EPA in the coming year.