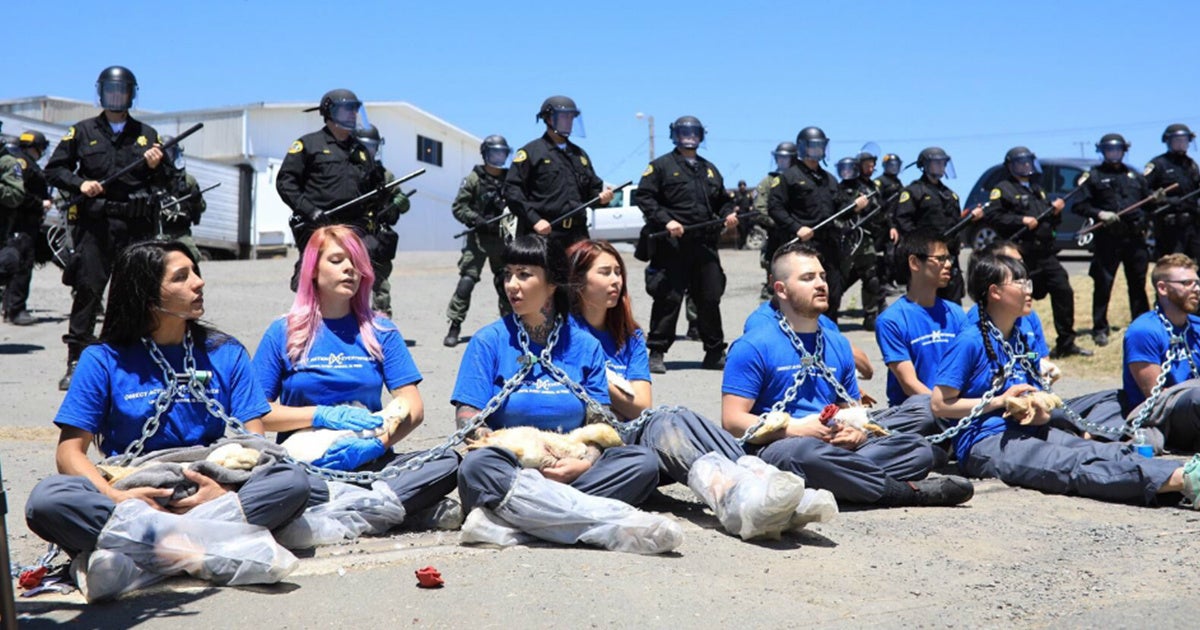 More than 600 animal rights activists descended on a massive duck slaughterhouse in California on Monday to protest rampant animal cruelty at the facility and demand accountability for those profiting off such “torturous” mistreatment.

As over a dozen activists with the animal rights group Direct Action Everywhere (DxE) chained themselves together at the entrance of the Reichardt Duck Farm in Petaluma — which slaughters a million ducks annually — others entered the facility and came out with severely injured or dead birds, providing evidence that the slaughterhouse is engaged in cruel and unlawful practices.

According to DxE, activists “removed 32 ducklings and rushed them to emergency veterinary treatment. They will then be transported to farm animal sanctuaries for lifelong care.”

In total, 98 activists were reportedly arrested at the demonstration, which was quickly surrounded by baton-wielding riot police.

“Many of the arrestees locked their necks to the slaughterhouse shackles, gate, and other machinery,” DxE said in a press release.

Former assistant U.S. attorney Bonnie Klapper, who reviewed undercover footage and veterinarian reports on the Reichardt Duck Farm, said in a statement that conditions at the slaughterhouse “are not normal, accepted industry practice.”

“When law enforcement has become aware of the existence of animal cruelty, its response has not been to address [it],” Klapper said. “To the contrary, the response has been to hunt down and arrest the rescuers and even attempt to return the injured, sick, dying animals to the agricultural facility.”

Glenn Greenwald, an animal rights advocate and co-founder of The Intercept, echoed this point on Twitter while applauding the bravery of those taking direct action to stop “factory farm atrocities.”

“The real criminality is the systemic torture and slaughter of billions of animals in the cruelest, filthiest, most sadistic conditions,” Greenwald tweeted, sharing videos of the DxE activists during their demonstration on Monday. “It breaks multiple laws. But the police protect the corporate criminals, and instead arrest those saving lives.”

Wayne Hsiung, a former law professor and co-founder of DxE, said in a statement that his group is “merely asking the elected officials in Sonoma County to enforce the law — including against animal abusing corporations.”

“The government is protecting powerful corporate interests,” said Hsiung, “even where those companies are engaged in unlawful, fraudulent, and torturous practices.”