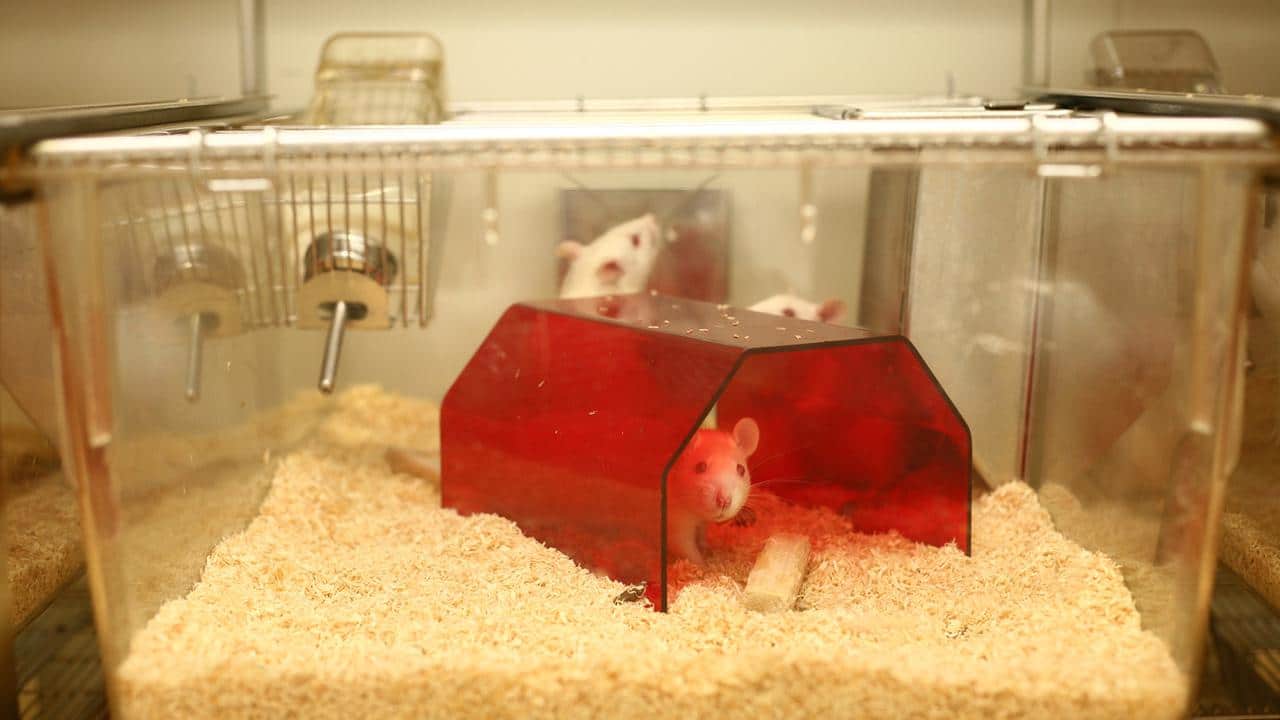 The life of a mouse or a rat is an unenviable one. Chances are that if you’re in the urban wild, you must contend with deadly traps, poisons and broom-wielding humans. If you’re a country-dweller, you might have it a bit easier, but then again you may be blown to smithereens by a shotgun or carried off in the sharp talons of a barn owl. Or be poisoned anyway. “The only good mouse is a dead mouse,” Australia’s deputy prime minister Michael McCormack said recently, as the nation ramped up its war on mice with a plan to poison millions of them in New South Wales.

Either way, you’d still have your freedom and be much better off than one of the more than 111 million mice and rats who are used, abused and/or killed in the name of biomedical research in the United States every year. These highly intelligent rodents are so popular among researchers that they represent 99 percent of all animals used in laboratories. Much of the horror is funded by taxpayers—more than $16 billion each year since 2017—even though a majority of Americans oppose the use of animals in scientific research, according to a 2018 Pew Research Center poll.

Sue Leary, the president of the Alternatives Research and Development Foundation, which is dedicated to finding humane replacements for animal-based research, said the staggering number of lab mice and rats—the recently compiled figure of 111 million—is concerning because rodents are not protected by the federal Animal Welfare Act (AWA), which provides some protections for animals used in research. “If the numbers are anywhere near correct, the amount of pain and suffering that’s occurring in these animals is completely unacceptable,” she said.

There’s another reason to stop testing on mice and rats, too. Due to significant differences in biology, mice and rats are terrible substitutes for humans when it comes to medical research. Biologists Javier Mestas and Christopher C.W. Hughes studied the differences between mice and human immune responses and found that mice are poor preclinical models of diseases that impact us. In 2004, while they were researchers at the Center for Immunology and Department of Molecular Biology and Biochemistry at the University of California at Irvine, they published a study in the Journal of Immunology showing the limitations of using mice models. “The literature is littered with examples of therapies that work well in mice but fail to provide similar efficacy in humans,” they wrote.

While rats and mice may be different from us biologically, emotionally they seem incredibly similar. “Male rats will snuggle up for a cuddle and find contentment when they are curled up in a person’s lap,” according to PETA, a nonprofit animal rights group. “Although female rats are just as affectionate, they tend to be tremendously energetic and inquisitive. Rats love seeing kind people and will often bounce around waiting to be noticed and picked up. Rats can bond with their human companions to the point that if they are suddenly given away to someone else or forgotten, they can pine away—and even die.”

Though mice and rats are the most used animals in laboratory experiments, a whole host of other animals are in the crosshairs, including birds, frogs, rabbits, guinea pigs, hamsters, pigs, sheep, dogs and cats. (In 2013, the National Institutes of Health (NIH) announced a phaseout of chimpanzees in biomedical research, though dozens of chimps formerly used in research are still locked up in labs.)

“Rodents’ capacity to experience significant pain and distress in experiments is no longer contested. With over 100 million of these sentient animals born per year for American science, it is time to revisit the adequacy of their welfare protections,” writes Dr. Larry Carbone, a veterinarian and animal welfare scholar, in a paper published in January in the journal Nature. “If the same proportion of… [rats and mice] undergo painful procedures as are publicly reported for AWA-covered animals, then some 44.5 million mice and rats underwent potentially painful experiments.”

And it’s not just mice and rats that make poor preclinical models. Conducting research on any nonhuman species to understand human disease is inherently flawed. “[A] growing body of scientific literature critically assessing the validity of animal experimentation generally (and animal modeling specifically) raises important concerns about its reliability and predictive value for human outcomes and for understanding human physiology,” writes Dr. Aysha Akhtar, a fellow of the Oxford Centre for Animal Ethics, in a 2015 paper published in the journal Cambridge Quarterly of Healthcare Ethics. “The unreliability of animal experimentation across a wide range of areas undermines scientific arguments in favor of the practice.”

In designing a more ethical and more scientific future that doesn’t involve harming animals, one way to think about alternative methods is to replace or reduce the use of animals, or at least refine the way they are used to lessen their suffering. This approach is known as the “Three Rs“: replacement, reduction and refinement. But to start this change in meaningful ways, there needs to be political will for the federal government to craft a legal framework.

That framework could be enforced with the passage of a bipartisan bill, currently making its way through Capitol Hill, that would change the way federally funded research is conducted. Developed by Citizens for Alternatives to Animal Research and Experimentation (CAARE), a nonprofit organization that promotes research without animals, the Humane Research and Testing Act (HRTA), H.R. 1744, is a first-of-its-kind bill that seeks to establish a separate center under NIH called the National Center for Alternatives to Animals in Research and Testing. This new center would fund, incentivize and train scientists to use new, innovative, non-animal research methods. Reintroduced in Congress by the late Rep. Alcee Hastings (D-FL) and Rep. Vern Buchanan (R-FL), HRTA would also allow taxpayers to know more about what they are paying for by requiring NIH to disclose the total numbers of animals they are using every year. The bill also requires NIH to submit ongoing plans for reducing the number of animals used in testing, to fulfill its mandate.

The bill has “immense potential to tackle the problem of millions of animals used in wasteful and repetitive research,” says CAARE, but it “needs more cosponsors.” So the group has launched a public petition—already signed by more than 150,000 people—urging Congress to pass the bill. This legislation affords us the opportunity to move the nation to a more ethical place when it comes to animal rights. It also will stop the wasteful use of federal dollars on cruelty that most American taxpayers don’t want, while also shifting research to a more human-centered approach, which is ultimately better for human health.

“Science has advanced considerably in the 21st century so that research can be performed using non-animal methods that are more relevant to human medicine,” Barbara Stagno, president and executive director of CAARE, told Earth | Food | Life. “Despite that, many millions of animals continue to be used, and the U.S. is one of the largest users of animals in laboratories worldwide. The Humane Research and Testing Act holds great promise to change the current paradigm of routine overuse of [laboratory] animals in the face of available alternatives,” she added.

In March, CAARE hosted a congressional hearing in support of the bill. The hearing, titled “21st Century Innovations in Alternatives to Animals in Biomedical Research,” featured as its keynote speaker the famed primatologist Jane Goodall, who shared her first experience with the extreme suffering that imprisoned nonhuman animals are forced to endure in laboratories across the nation and the world.

“It was in 1985 that I first saw with my own eyes the cruel, inhumane, and sterile conditions in which thousands of sentient animals are kept for use in medical research,” said Goodall, who was named a Messenger of Peace by the United Nation in 2002. “On moral and ethical grounds, I found this shocking and unacceptable,” she said, adding, “Despite an abundance of exciting breakthroughs in science and technology for the replacement of animal models, and a number of laws and policies that encourage the reduction of the number of animals used in experiments, we have unfortunately not seen enough progress in this area. Creating a dedicated center under the NIH devoted to providing scientists with the funding and training to replace animals would, without doubt, lead to major change.”

Reynard Loki is a writing fellow at the Independent Media Institute, where he serves as the editor and chief correspondent for Earth | Food | Life. He previously served as the environment, food and animal rights editor at AlterNet and as a reporter for Justmeans/3BL Media covering sustainability and corporate social responsibility. He was named one of FilterBuy’s Top 50 Health & Environmental Journalists to Follow in 2016. His work has been published by Yes! Magazine, Salon, Truthout, BillMoyers.com, EcoWatch and Truthdig, among others.